The test setup we used also doubled as our practical build. This is a compact gaming rig and the process of building a legitimate gaming setup helps to identify the elements of the motherboard that are well thought out and perhaps less obvious as well as things that might be less practical than they seem when just looking at the board in the box. In this exercise, we had the Fractal Design Core 500 ITX case handy which can accommodate a number of full sized components despite its compact size.

Intel provided us with an i5-6600K CPU so I didn’t go too crazy with the overclock but I did manage to hit 4.5GHz and have it OCCT stable. My 4.6GHz attempt was game-stable but not OCCT (our stress testing utility) stable. We saw exactly the same overclock result on another Z170 motherboard and couldn’t improve on it with this board so it seems that the Gigabyte Z170N Gaming 5 was hitting the CPU limitation, and not limited by the power delivery or BIOS.

The overclocking utilities and BIOS interface were simple to use and we didn’t observe any bugs or defects.

Our testing in a standard ‘home setup’ transferring data through internal walls didn’t hit the rated 867Mbps speeds but with WIFI, your mileage will always vary. Something to keep in mind is the distance to the router/access point and other devices in the environment. For our purposes in some blind tests with the Ethernet cable connected and disconnected for online gaming or media viewing, we couldn’t tell the difference. File transfers were more obvious with the WIFI transferring at less than 300Mbps through 2 internal stud walls on a 45 degree angle – the Gigabit LAN performance was much better and hit over 800Mbps as an average.

The BIOS was easy to follow and didn’t have any issues with our peripherals. The XMP detection on the RAM was spot on and the Kingston HyperX Savage DDR kit was identified right away. 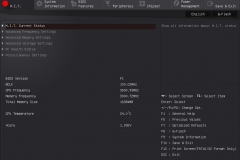 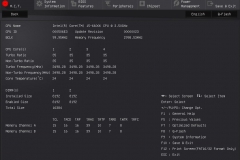 This was our second time building with the Core 500 ITX case so the process was even faster than the previous build with the MSI Z170 Gaming Pro AC. The CPU backplate went on without any issue, as did the NH-U9S heatsink. The I/O shield fitted the cut-out in the rear of the case without any extra force required and the 4 motherboard mounting holes all lined up as you would expect. As with other recent ITX boards, the front panel I/O connections were a little bit fiddly and we checked the manual to make sure everything was connected correctly. A front panel quick-connector that vendors previously included would have been really handy here. We didn’t need to access the side SATA ports and despite it being really tight, we might have been able to use a 90 degree SATA cable if absolutely necessary. The front USB 3.0 cable looked a little ugly in the middle of the board but it was easy to attach and with the 92mm cooler, there weren’t any clearance issues. 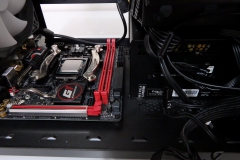 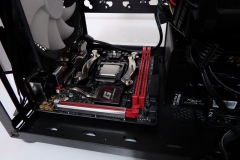 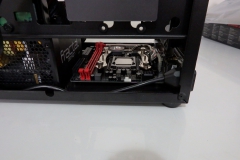 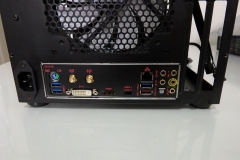 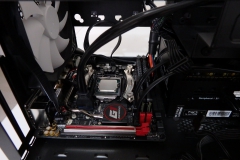 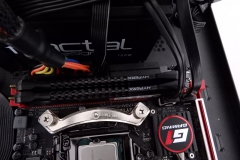 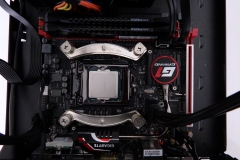 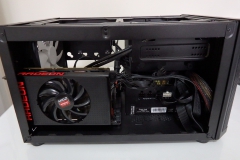 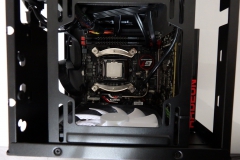 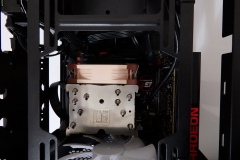 This setup was a dream to game on. The build was quiet, performed well and the audio output was flawless via both front audio connections and the rear gold plated audio jacks. The more we used this setup, the more we appreciated the utilities and the stability of the rig. Boot times were lightning fast and gameplay was on par with the much larger HASWELL-E MSI X99S Gaming 7 beast test bench.