The impressive Realtek ALC1150 chipset features on many if not most gaming grade motherboards. It has 10 DAC channels and supports 7.1 audio and can output to the rear ports and the front ports at the same time with different signals. This is going to be complete overkill for most people but it could be handy for streamers. There are also gold plated connections and 115dB Signal to Noise Ratio (SNR) to ensure that the end result holds its own against a dedicated gaming sound card. Gigabyte has also used a gold plated cover on the audio controller to ward off electrostatic interference. We also see the Japanese branded Nichicon audio capacitors used for the gaming sound experience.

Gigabyte has also included the SoundBlaster X-Fi MB3 software package to enhance the gaming experience with options to improve audio effects and increase the immersion. 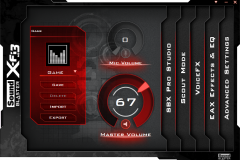 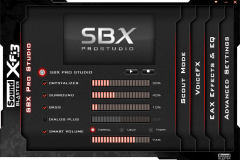 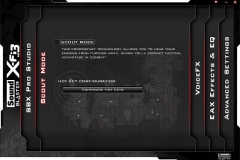 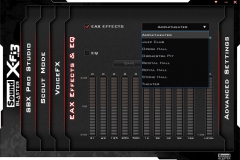 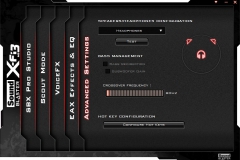 Our experience testing the audio was great – we used both speakers and headphones, testing music, movies and a range of games. In the end, the audio sounded crisp and was probably the hero of the board from a gaming perspective. Owners of this board won’t be left wanting unless they are serious audiophiles with superhuman hearing and crazy expensive headphones.

Connectivity is key to gaming now more than ever. Most of the games we play have an online component where latency can make or break your experience. Whilst we always prefer a wired connection, AC wireless is a pretty decent ‘Plan B’. Thankfully, the Z170N Gaming 5 has the Killer E2200 chipset from Qualcomm Atheros for Gigabit Ethernet and Intel dual band WIFI.

The Intel 802.11ac WIFI and Bluetooth 4.2 module is mounted upright and wired to the rear antenna ports. The Intel WIFI controller also supports WIDI and is rated at 867Mbps depending on the signal strength.

The Ultra Durable™ PCIe Metal Shielding involves a single piece of stainless steel that surrounds the PCIe slot to help prevent it from splitting under the weight of heavy graphics cards or in the event of a LAN rig suffering a tip or drop. The PCIe slot is also anchored to the motherboard with higher grade solder points that look more like hooks. Gigabyte claim that their protection makes the slot 1.7 times stronger in a shearing test and 3.2 times stronger in the retention force test than a standard PCIe slot. Whilst we didn’t try to break the PCIe slot, it certainly felt sturdy and looked pretty good at the same time. Whilst I’ve never had any issues with a PCIe slot shearing, when I asked around, I found a few people who have seen it – admittedly in all cases, the systems involved had been damaged in transit. Whilst this isn’t necessarily an essential feature, it’s nice insurance.

There are two SATA Express connectors that allow data transfer speeds of up to 16GB/s. Unfortunately we didn’t have any devices to test this but from a longevity angle, this could be something that adds performance to your system later on and staves off an upgrade for a little bit longer.

The aesthetics of the Z170N Gaming 5 board are crisp and it feels like a gaming badass. The new ‘G1 Gaming’ logo is an improvement over the previous Gaming ‘eye’ reminiscent of the F1 racing logo.

There is more silver/aluminium on the board than the Z97 version – mostly due to the PCIE brace but also the heat sink trims. The heatpipe is more of a gun-metal colour and the DDR4 slots have been highlighted in red. If you are building a ‘display’ rig with this board, anything other than black, red or white is likely to look a little out of place. Mounting the battery and WIFI card vertically has saved some space and also made the small ITX landscape less cluttered. The isolation PCB patch for the audio also has red LEDs installed but these can be adjusted to be on, strobe to music, ‘breathe’ or be switched off entirely.

The main motherboard manufacturers have a focus on quality components and Gigabyte is no exception. The audio capacitors are Japanese Nichicon banded, and the other motherboard capacitors are the Black Solid Caps known for long life, low ESR and high durability. The CPU socket is 15 micron thick gold plated with the Audio and HDMI ports also gold plated for improved conductivity and the ability not to tarnish over time.

With build quality like this, dual BIOS and connectivity options like Type-C, SATA Express, PCIe Gen3 x4 M.2 this is a board that we’d expect to go the distance, allowing a gamer to skip a socket before upgrading. 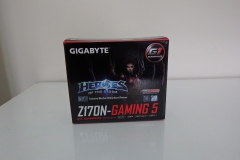 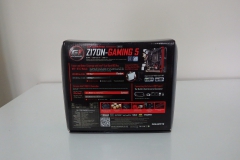 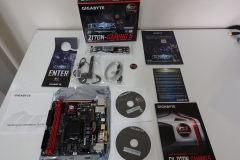 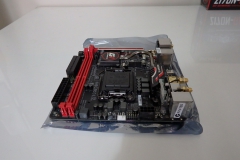 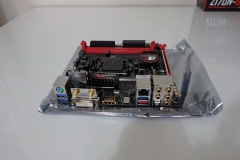 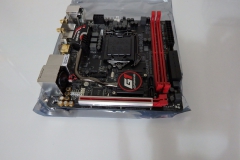 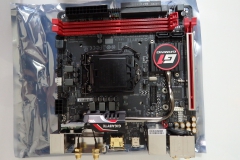 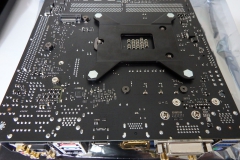 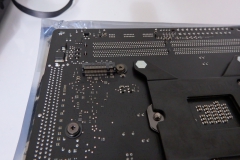