Noctua understands that when it comes to air cooling, enthusiasts’ needs are different. There are times when you still want that 140mm fin stack but don’t have the height – the NH-C14S was made for just such an occasion.

The NH-C14S isn’t a totally new concept. The heatsink design is a horizontal fin stack with long heat-pipes that allow a fan to be installed underneath it, above it or both.

Obviously when working with a flat heatsink the air is either drawn from the motherboard or exhausted onto it depending on the orientation of the attached fan(s). Whilst you can get better, unimpeded airflow from a traditional cooler, if the headroom isn’t available – the alternatives are usually a low profile cooler or water cooling (custom or AIO). Low profile fin stacks are usually thinner or more compact and less effective whilst water cooling will depend on the size of the radiator or radiators in the loop. One downside to flat low profile coolers is the footprint. They can restrict access to RAM and either block or seriously restrict access to that first PCIE slot where a graphics card needs to go. This is where the design of the NH-C14S really shines.

Noctua engineers have used the same asymmetrical design concept on the NH-C14S as we saw on the NH-D15S in that the fin stack is off-centre to give the system builder more clearance on the PCIE slot side of the cooler. This subtle tweak makes a massive difference for a system builder and also means that the conductive fin stack and clips are well clear from the back of the graphics card. It also means that a larger 140mm fin stack is possible with better cooling potential. A larger surface area means 2 things, firstly the NH-C14S is able to better cope with an ambitious overclock than a 120mm or smaller low profile heatsink and secondly if not overclocking, the included NF-A14 PWM fan doesn’t have to work as hard to transfer the heat. The latter results in extremely quiet operation under stock volts – even under high load.

The heatsink itself has 7 heat-pipes, aluminium fins in a single horizontal 140mm square fin stack and a nickel plated copper base. The PWM fan is the latest NF-A14 model with the long list of aerodynamic features we covered in our prior review of the fan itself. The trusted Noctua SecuFirm2 mounting system ensures that the cooler has optimal contact with the CPU heat spreader and fits a wide range of sockets.

Why not go AIO instead? This is a legitimate question but AIO water cooling is not always practical, the heat exchanger is usually at least 60mm x 120mm, there are hoses to manage and in most cases, the pumps are not silent. A low profile performance cooler like the NH-C14S provides the performance of a 140mm fin stack, a very quiet acoustic profile thanks to only 1 moving part being the fan and access benefits of the asymmetrical design, so accessing the PCIE release lever on that graphics card slot is still easy to get to. In the example of the Thermaltake Core V1 case, any AIO with rigid hoses is going to be an issue and a 120mm tower cooler won’t fit either so this is probably the best option for performance cooling without a custom water loop. 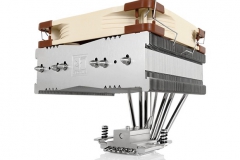 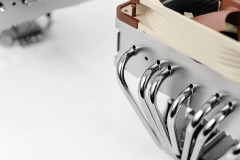 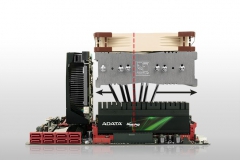 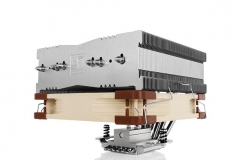 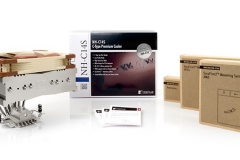 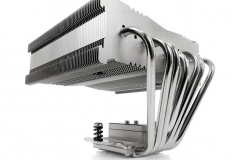 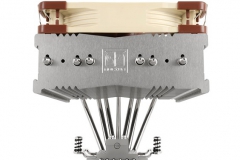 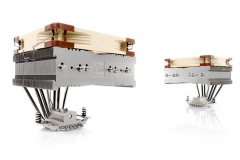 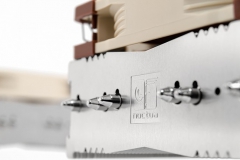 The C14S can be low profile when used in the default configuration but it can also have the fan mounted on the top or even in push/pull with a fan both above and below the fin stack.  What this means is that with the fan mounted under the heat sink, the overall height of the NH-C14S is only 115mm but if the system builder needs to accommodate tall RAM modules or wants to fit the fan on the top for another reason such as dual fans, the height is still only 142mm. This still sounds tall right? The 120mm Noctua NH-U12S stands 158 tall so even in its tallest configuration, the NH-C14S is still 16mm shorter than a standard 120mm vertical heat sink.