We tested the NH-D15S on the HASWELL-E X99 test bench with the specifications listed below. 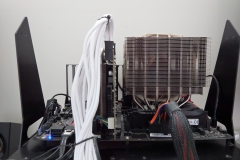 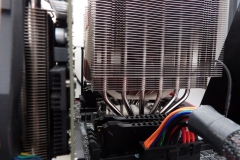 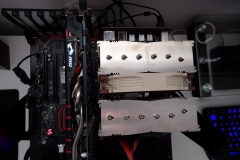 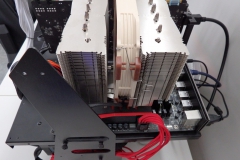 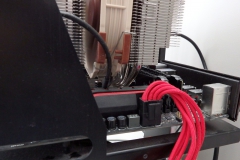 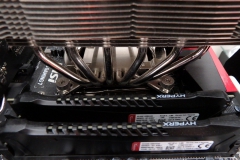 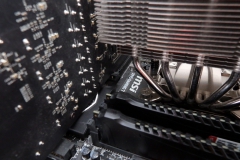 Let’s start with the PWM tests. PWM is where the motherboard uses the 4 wires to control the fan(s) and adjusts the speed as per the software profile to maintain a temperature. The standard ASUS profile will increase the CPU fan speed as it gets warmer to try and maintain a temperature under 75 degrees. This means that the temperatures listed in the graph below don’t mean a great deal as all coolers will have different fan speeds to maintain the maximum temperatures listed. However the graph does show coolers that struggle to keep the CPU cool under extended load (high temperature results) and we do use this test to check how hard the CPU has to work at stock settings and when overclocked.

The chart below shows the CPU load temperature under stock CPU settings in blue and the maximum fan speed of the cooler in red.

We saw the NF-A15 fan staying under 500rpm during the stock CPU tests under sustained load. The noise level on the open air test bench was inaudible and didn’t register above the ambient room noise on our decibel meter. The dual fan NH-D15 achieved a slightly better result with the additional fan and 100RPM. This shows that the single fin stack coolers have to work harder to manage the CPU TDP, the much smaller NH-L9x65 had to work the hardest of all in what was an unfair comparison of performance.

The NH-D15S is slightly inferior in terms of thermal performance to the dual fan version – as expected. This is a great result given that we basically sacrificed 3-5 degrees in a synthetic benchmark for a CPU cooler that is more compatible with a lower price tag.

The idle temperatures were all consistent and in line with other performance coolers. Measuring idle temps can be finicky due to minor fluctuation among the ‘idle’ processes so we don’t give it much weight. We saw the typical delta temperature of around 8 degrees at idle which indicates that we had a good ‘mount’ of the cooler to the CPU with the SecuFirm 2 bracket.

The NH-D15S handled the load temperatures of our i7-5930K without any trouble at all. When the open air test bench was running at stock volts, the cooler was inaudible, overclocking upgraded the acoustic profile to barely audible. When fitted into a case as per a typical build, this would give an almost silent result from a CPU cooling perspective.

As expected, the thermal results were not as impressive as the NH-D15 with dual fans but it still beat everything else when overclocked. This is a great platform because if you ever decide to go nuts with an overclock later on, you can easily add another A-15 to the front and upgrade the cooler in literally minutes without the need to re-install any components.

With the MSI GTX 980 Gaming 4G card that has their Twin Frozr V cooler, the whole test bench is almost silent. There is a slight sound of air moving at idle but that’s about it. Under load, the loudest component is the Corsair HX-850 PSU that we’ll have to do something about at some point. If you’re a quiet freak like me, this is the cooler for you.

Whilst I really like the NH-D15, it is hard to go past the NH-D15S for the sake of a minor difference in thermal performance. This difference isn’t of any consequence in real world use with a moderate overclock.