Noctua has delivered a worthy successor to their NH-L12 cooler with the NH-L12S. It has one less fan and is more versatile. It also provides consumers with a great alternative to compact stock coolers without the need to ‘go-tall’ with a tower.

I recently reviewed the NH-L9i-AM4 cooler as the most compact AM4 cooler going around and it performs well but the next step up for HTPC or small form factor builders is the NH-L12S which delivers even more airflow over the motherboard socket components and has more cooling potential with a larger, but still flat, fin stack. 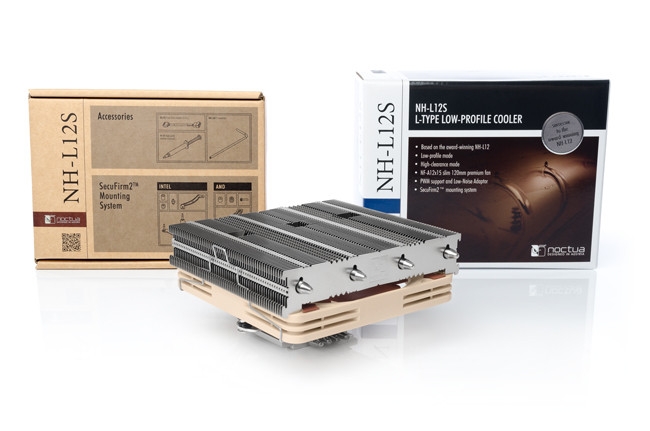 The original (and now discontinued) NH-L12 had a very similar heatsink design but came with a top-mounted NF-F12 fan and a lower NF-B9 to maintain airflow and static pressure. This was effective but the older NH-L12 had a maximum height of 93mm with the top fan fitted – and you really needed that top fan. The NH-L12S has a height of 70mm with the fan mounted under the fin stack or 85mm with the fan in optimal position on the top of the fin stack. With the fan mounted in the top position, the cooler will sit over RAM modules up to 48mm tall which included the large ADATA Spectrix modules we had for testing and the performance HyperX Predator RGB kit that we use in our ASUS STRIX test bench.

Low profile cooling isn’t typically as effective as tower cooling or AIO cooling because the fin stacks don’t have as much surface area and the air can’t escape as easily due to it being passed onto the motherboard, but there are benefits just the same. System builders may elect to use a low profile cooler if their case is a small form factor, slim or if they want to draw air in via a side vent over the socket area. In most cases, a HTPC requires a low profile cooler and if you are running a PC in your lounge, you would almost certainly want it to be dead quiet. The Noctua NH-L12S should be your first choice.

The SecureFirm2 mounting mechanism is Noctua’s signature CPU cooler mounting system and it makes fitting coolers of any size both quick and easy. In a cramped case, the SecureFirm2 mounting system is even more valuable than in a standard ATX size chassis. The only tip I’d suggest is to make sure that you connect the 120x15mm FAN’s 4-pin PWM cable to the CPU fan header on your motherboard before mounting the fan as the header can be hard to access once the cooler is in place.

The Noctua TDP guidelines are a little more forgiving than the smaller NH-L9a-AM4 alternative – Noctua has listed the CPU compatibility very clearly on their site and I had no trouble finding the Ryzen 5 2600 CPU in the list for our testing. 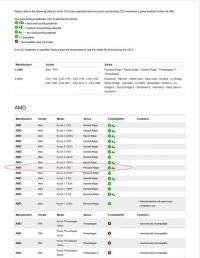 Noctua have a note on the product page that states:

As with any low-profile cooler, case airflow is very important – meaning that you will need to keep cables neat and fans tuned to provide constant airflow to feed the CPU cooler and exhaust warm air. 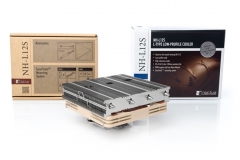 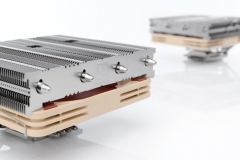 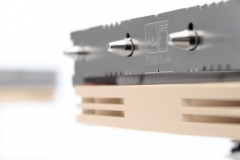 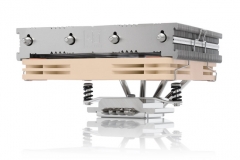 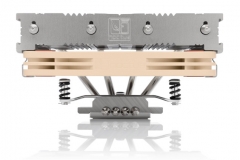 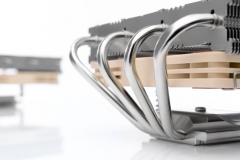 The NH-L12S uses an NF-A12x15mm fan rather than the NF-F12 25mm thick fan but is compatible with the larger fan if the system builder wants to use one.

The configuration is flexible in that the NF-A12x15 can be mounted above or below the horizontal fin stack and can move air either upwards away from the motherboard or downwards towards the socket area.

Noctua back this with a 6-year manufacturer warranty which is about as close to a ‘system lifetime’ warranty as you will see. Noctua also provide brackets for future sockets free of charge for their coolers so it’s technically possible that this cooler could potentially last more than one system life cycle.

A full tube of NT-H1 thermal compound is included with the cooler. I love this stuff and use it all the time. It’s non-conductive, has a good consistency and is easy to clean with paper towel and a bit of isopropyl alcohol. It doesn’t “stick” to the IHS or contact plate

I keep saying it but Noctua set the benchmark when it comes to quality. Their coolers have always been in perfect condition when I’ve received them, they seem to last eternally and everything goes together just as the well-laid out instructions indicate. The whole experience of buying/receiving a Noctua product is quality from opening the box, through installation to the end result.

I’ve never been disappointed by the build quality of anything from Noctua and I’ve seen almost every product released since 2011. I hope they continue their focus on getting this right because it’s an example to all manufacturers. 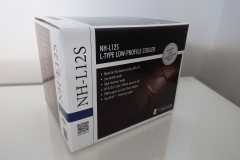 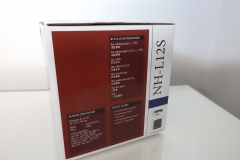 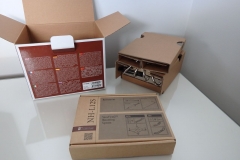 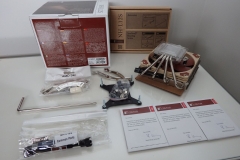 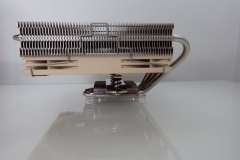 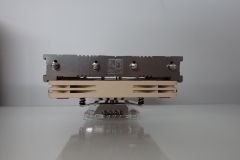 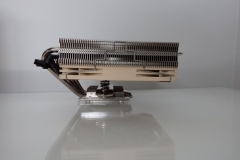 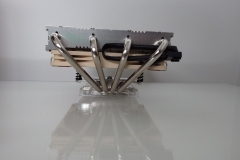 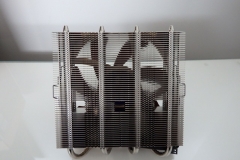 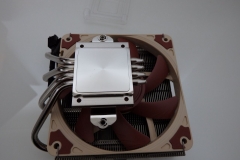 Specifications of the cooler can be found below.

The Ryzen 5 2600 CPU comes with a Wraith Stealth stock cooler. The Wraith Stealth is a low profile cooler and is adequate for keeping the 2600 under the maximum temperature thresholds. We tested the NH-L12S against the Wraith Stealth as this is the cooler it will most likely replace in a small form factor PC build with a non-X series Ryzen CPU.

As I’d used the Wraith Stealth cooler previously, the pre-applied thermal paste had been cleaned off the stock cooler so we used the NT-H1 compound from Noctua.

We used Blender and AIDA64 stability tests to load the CPU for 45 minutes each. The test system was left in an idle state for 30 mins prior to the testing for each run at the applicable fan speed at 12v to eliminate the PWM fan curve as a factor for the best case cooling scenario of each cooler.

The case side panel was left open for all testing.

Temperature monitoring was done with HW Monitor V1.35 and cross checked with AIDA64. 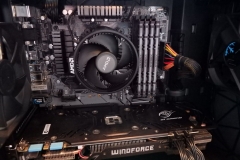 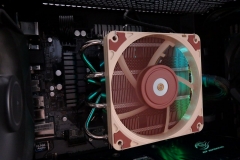 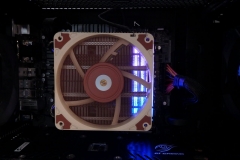 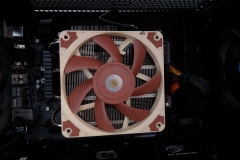 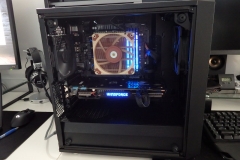 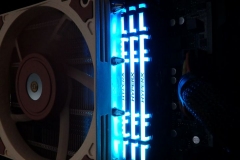 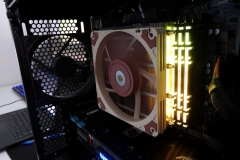 When testing any CPU cooler at 12V, it tells us what the cooler is thermally capable of – even if the noise profile is too loud. This test also helps us to identify a bad mounting with the CPU.

Keep in mind that the temperatures were taken in a room with an ambient temperature of 20°C as per the reading in HWMonitor v1.35.

The expectation was that the Noctua NH-L12S would out perform the stock Wraith Stealth cooler but the question was by how much and what would the noise comparison be like? Once that was ascertained, how does the value proposition stand up? 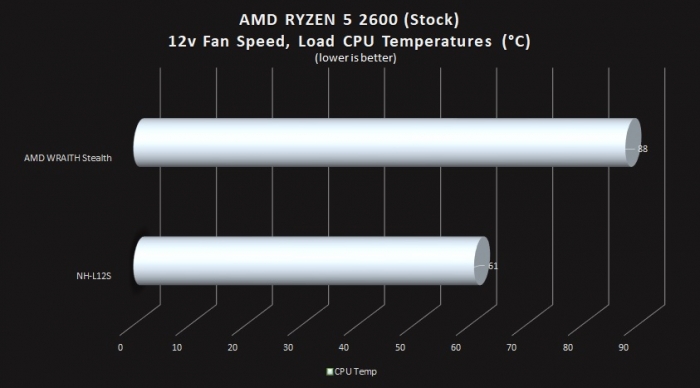 The difference was more than I’d expected with the peak load temperature difference being a massive 27°C in favour of the NH-L12S. This wasn’t a fair fight, I was testing a premium 120mm fan against a free much smaller unit with less surface area and no heat pipes but I didn’t expect the NH-L12S to be almost 30% cooler than the stock option.

The other thing to note was that the NH-L12S barely registered above 21dB(A) on the decibel meter at 50cm from the open chassis when running at 12V. Under typical use, the fan is virtually inaudible.

When running the coolers at PWM mode using the default/standard PWM fan curve of the motherboard, the difference was very telling and I’m confident that most attentive system users would notice the benefit of the premium cooler.

The stock Wraith Stealth spent more time in the upper range of the motherboard fan curve  at a faster speed with a standard workload (i.e not running Blender). The CPU was typically under 60°C but the stock cooler was audible outside the case. Temperature spikes when gaming went into the 70-80°C area.

The NH-L12S still showed CPU temperature variation but the idle temperatures were notably lower and the spikes nowhere near as high with the maximum observed temperature being 59°C in standard office productivity and gaming workloads.

The street price for a Noctua NH-L12S is $99. This is a premium price for a low profile cooler but after using it with both the AMD Ryzen 2600 and 1700 CPUs I consider it a good buy. The ease of mounting, quality construction and near silent operation are premium elements on top of impressive thermal performance. Also, consider that Noctua includes a full sized tube of NT-H1 thermal compound valued at $11 retail, they don’t just include enough for a few mounting attempts. For $99, you really do get what you pay for in this case.

The NH-L12S is a niche product and made to suit a small cross-section of system builds. If you don’t have a need for a low profile cooler, opt for a tower cooler such as the Noctua NH-U12S, a better option at the same price allowing the air to pass straight through the heat sink from the front of the case to the rear exhaust.

If you do have a smaller case, the NH-L12S will cool your CPU and maintain airflow over the VRM heat sinks. It does this quietly and without the need to manage hoses or radiators. Installation is simple and takes less than 5 minutes.

ITX cases like the Fractal Design Node 304 or Core 500 would benefit from a cooler like this as they have drive bays that sit above the CPU socket and whilst a stock cooler will also fit, the NH-L12S will give the motherboard more direct airflow, deliver lower temperatures and operate at a lower, barely audible acoustic profile.

The NH-L12S is a strong evolution from the NH-L12 and should be on the short list for anyone building a small form-factor system.