In our second review from the Deep Cool Gamer Storm line up we look at the low profile “Gabriel” for small form factor cases. After recently reviewing the Lucifer, we were expecting big things from this little guy but does it live up to our expectations? Almost..

Low profile coolers are made to fit in places where the vertical 120 and 140mm tower coolers won’t go, places like HTPC cases, mini ITX and even some M-ATX cases. A system builder usually makes a conscious decision to compromise with these coolers, going for the low profile and low noise factors over performance. We received a review sample of the Gabriel from the Gamer Storm series and set out testing it on the test bench and in 2 concept builds.

The Gabriel is a horizontal 120mm low profile CPU cooler with mounting brackets that are suitable for Intel 115x (but not 2011) and AMD sockets. The aluminium fins of the heat sink are appropriately spaced and shaped to work with low profile RAM like the Corsair Vengeance LP that we use in our test bench and personal rigs. There are 4x6mm heat pipes to help transfer the heat away from the copper base. The pipes are shaped in a way that is unlikely to foul anything else on your motherboard – they basically come out of the base, make a neat 90 degree bend, then bend again neatly to support the fins and top mounted fan. The heat pipes also don’t loop around too much, keeping the chances of interference with other components in a mini ITX build minimal. Mounting this cooler on a motherboard is easy – so easy that I’d say it’s up there as one of the easiest to install. The Gabriel also fitted in a build where other coolers didn’t – more on that later.

The 120mm PWM fan is only 20mm thick as opposed to the usual 25mm of a standard case/CPU fan – this helps reduce the overall height of the cooler. The fan is quiet in general use but does get loud under load and if you run it at 12v or full speed in a PWM profile, you will hear it over other case components and ambient room noise. It isn’t offensively loud at full speed but it’s clearly noticeable. Luckily, a CPU that isn’t overclocked running in a well-ventilated case it shouldn’t be an issue – for a HTPC it is very quiet. In general use on our two concept builds (one MATX and one Mini ITX), it was perfectly fine from an acoustic perspective.

At $49 the Gabriel slots in at the middle of the range for low profile coolers. 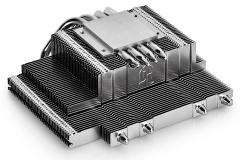 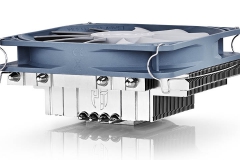 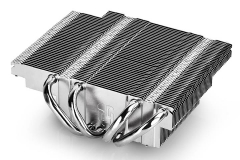 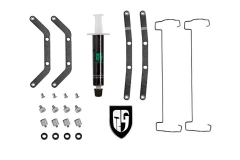 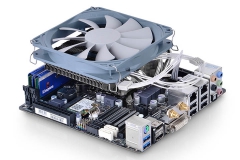 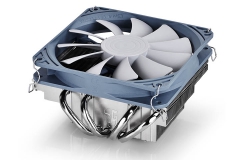 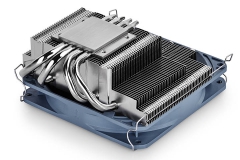 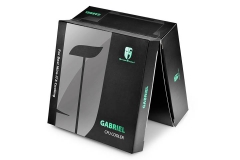 The features as outlined by Deep Cool are below

“Based on the concept of designing a SFF cooler for Mini ITX boards, the overall dimension of GABRIEL is 120X120X60mm with a 20mm thick fan included. The low-profile design ensures the widest compatibility.”

“GABRIEL consists of a copper base with four copper heat pipes soldered and aluminum fins. The full set of heat sink is nickel plated in order to keep away from oxidization to ensure a long lifespan.“

“GABRIEL is equipped with a high performance 120mm cooling fan, which can push 61.93CFM airflow to cool down the heatsink. This slim fan is PWM controlled, running at 900-1800±10%RPM. However, it is very quiet, minimum at 18.2dBA, due to its extraordinary dynamic balance.”

“The fan cable is made of PTFE(Poly Tetra Fluoro Ethylene), which withstands high temperature and heavy duty usage. Two pieces of rubber cable ties are attached to route the fan cable to make everything in place.”

After testing the Gabriel against the marketing claims, my observations were:

What’s in the Box

The box unfolds to release the heat sink, the fan and the accessories box. Like the Lucifer, the packaging is black and green with the contents well protected. The accessories include: