The ASUS ROG X470-F test bench has been given a workout lately and we’ve had a lot of questions about the setup that I’ll answer here. 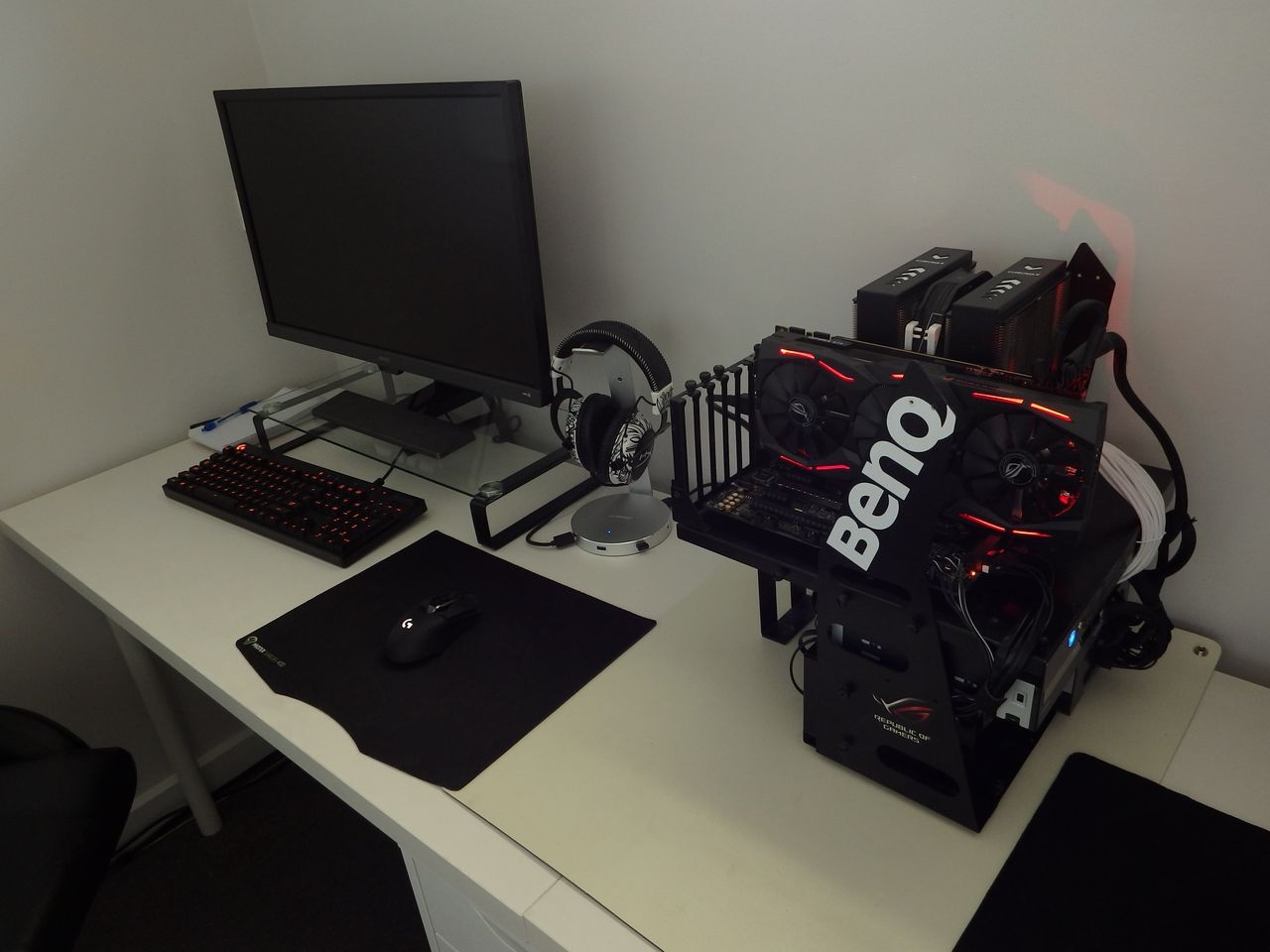 As a recap, the specification as the test bench currently stands is:

Previously, we had the system in an In Win 509 case but the rig has just returned to the open air test bench because it’s easier to move around, takes up less space and it also makes listening to fan noise more consistent.

The CPU cooler was also changed to a Noctua NH-D15S from the two previous AIO water coolers. This was done as part of an upcoming article about the difference between high end air cooling and water coolers.

The NH-D15S delivers a much quieter ride so we’ve left that in place to make testing other fans and graphics cards better in terms of noise isolation. The current test rig is whisper quiet with the ASUS STRIX GTX 1080Ti OC and the NH-D15S CPU both able to deliver top performance with an audio profile that barely registers on our decibel meter under load.

The before and after shots below also show how the NH-D15S looks with a cosmetic CHROMAX facelift. Check the Noctua website for more about how they’ve made air cooling sexy again. 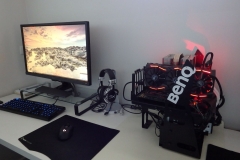 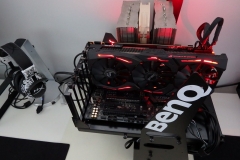 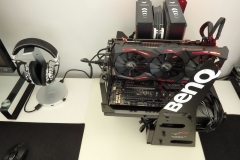 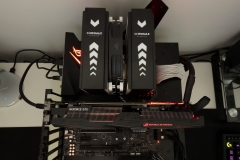 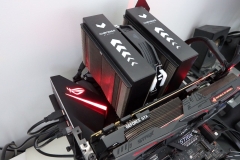 For gaming and general use, 2x8GB sticks of the G.Skill 3200MHz Flare as per our general CPU benchmark testing is ideal. The reason I use 4×8 modules is because of ASUS RAMCACHE II. It drastically reduces subsequent game load times (as in after the initial load) when I have 16GB of cache allocated. I still use 16GB of RAM for system memory but have the rest acting as cache managed by RAMCACHE II. This is probably the main practical feature of the system that I miss on the other motherboards I use. 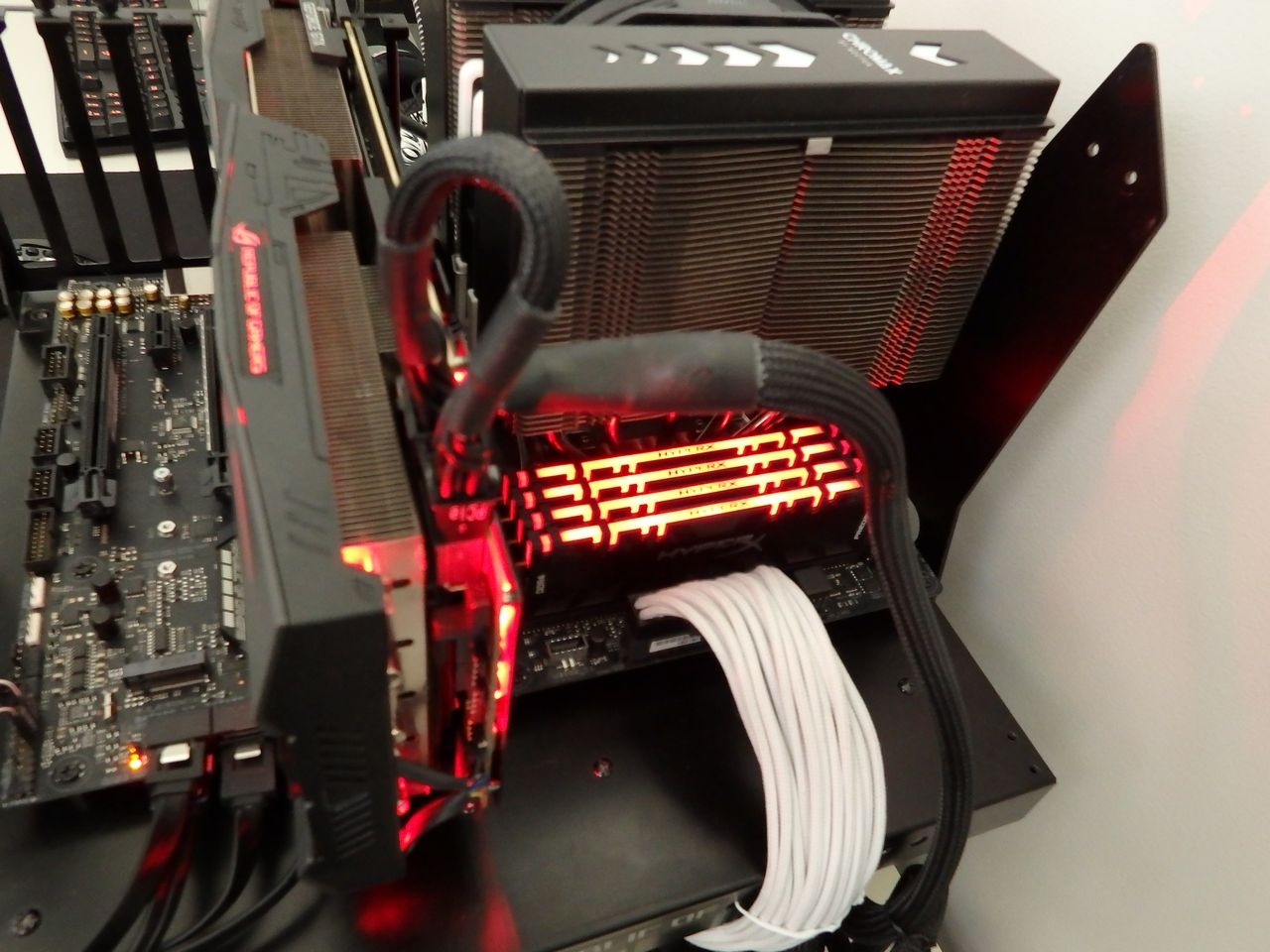 Is it stable and has AURA SYNC been updated to work with HyperX Predator RGB?

In September I had a series of intermittent hard ‘lock-up’ instances where I needed to turn the system off at the power supply as the power button wasn’t responsive. Since switching to a Corsair RM850x, the system has been perfect. Aside from that particular issue, this test platform has been 100% stable and hasn’t given me any grief. I still recommend the STRIX X470-F motherboard and STRIX GTX 1080Ti. This setup has provided the best gaming experience I’ve had so far. 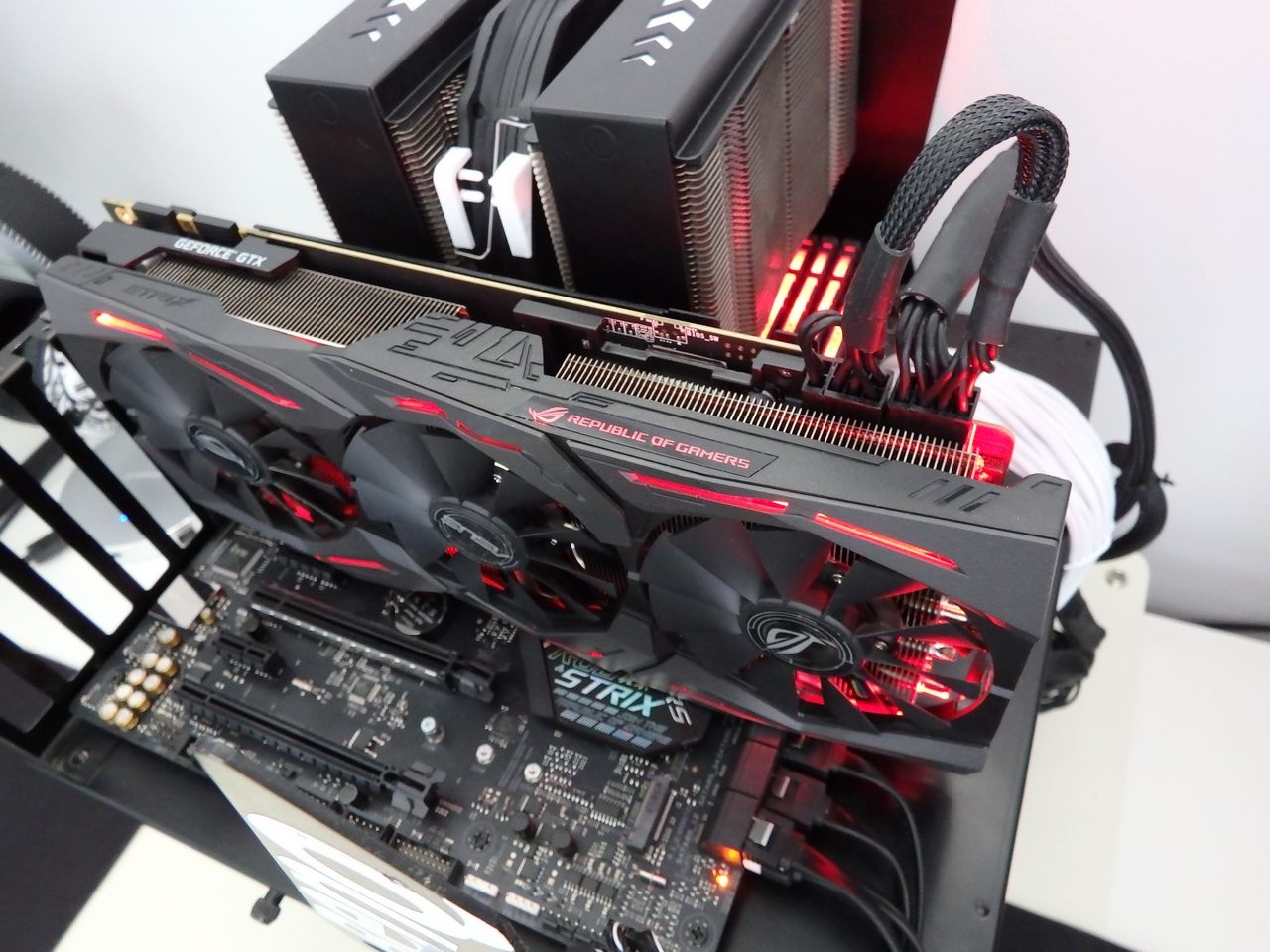 The HyperX Predator RGB DDR4 kit has also worked as per the review and the constraint with RGB effects not working via the ASUS AURA software is still there. Static colours are fine but the other lighting effects are still missing in the latest ASUS AURA software. This isn’t an issue for me as I find changing lighting a little distracting and the test bench always has a static colour in effect or we run it stealth with all lights off.

Can you turn off the LEDs?

Yes – you can either disable the AURA lighting completely or customise it so that the lights are either dim or off if you find them distracting. If I have to leave the system running overnight , I’ll use the AURA application and just click the ‘off’ toggle. It is also possible to dim the brightness.

Here’s the thing – there isn’t one main reason. The build quality is proving to be top notch and I can ‘tune’ the system in so many ways – thermally and acoustically via FanXpert, LAN priority, Caching for load times using RAMCACHE II. The audio is also really good with front and rear amplifiers and speaker impedance sensing. There are so many features/value adds at the ~$300 price point so this is a strong option.

I also like that the board is colour agnostic being all black with RGB so you can use it in any case with any themed build.

The socket is also clear and easy to get to which is important for us as we test different CPUs and graphics cards in this board so it has a lot more use in terms of component changes than a typical PC. If the socket area of a test board is congested or cramped with tall or wide heatsinks, it can be really frustrating so the STRIX X470-F Gaming is perfect in this regard.

Is a B450 motherboard better value?

I’ve had this question a bit and the B450 chipset provides an attractive value proposition and will meet the needs of many (if not most) gamers and PC builders. The X470 chipset is the premium AM4 offering with multi-GPU support, more USB and storage options and better overclocking potential. Vendors also tend to invest more in the inclusion of extra bells and whistles on an X470 motherboard than a B450 to compete at the enthusiast level.

You spend more on an X470 board like the STRIX X470-F Gaming but you also get more – only you can determine if the savings are worth it. For a long-term system, I’d be more inclined to spend a little extra on the motherboard if the funds are there. For people that change over and sell their old PC every couple of years, B450 might be more appealing.

As far as X470 motherboards go, the STRIX X470-F is still well priced and worth every cent as far as I’m concerned.

When overclocking there are no guarantees – just remember that. In our case, the Ryzen 2700 could be overclocked to achieve similar performance to the 2700X as it comes out of the box. You need good cooling and a good motherboard with clean power delivery. As far as our testing went, I’d be happy with a Ryzen 2700 in an overclocked state for my personal rig because I don’t mind tinkering in the BIOS.

The thing to remember about the 2700X is that it’s rated at the higher clock speeds and has eXtended Frequency Range 2 (XFR2) to take advantage of superior cooling should you use something better than the stock cooler – the 2700 isn’t rated at the higher frequencies. If you want a CPU that will work at 2700X speeds without any mucking around and you don’t like to tinker, spend the extra and just buy the 2700X – it’s an awesome CPU and the best performing Ryzen 7 available.

Our 2700X is not running an overclock – it’s rocking along at the stock settings with the DDR4 running on the XMP profile. The Noctua cooler keeps it cool and I’ve been really happy with the performance – especially for the price. The screen shot below shows the temps we see after 2 hours of OCCT in a room with an ambient temperature of 21.5C. The system was very quiet during this run so we could have shaved off a few degrees with a more aggressive fan profile on the NH-D15S.

Is water cooling needed to get the most out of Ryzen CPUs?

No. For many people, closed loop All-In-One (AIO) water coolers are much more convenient and they are very effective in terms of heat exchange and noise. AIO coolers are not essential and you can get great results at lower acoustic levels with good case ventilation and a high-end air cooler like the Noctua NH-D15, NH-D15S, NH-U14S and NH-U12S. My preference is the near silent NH-D15S as it has a single fan between the fin stack towers and there is an asymmetrical offset that makes it easier to get to the graphics card in the PCIe slot.

Air coolers have less points of failure and whilst they take up more room in the socket area, they are less complex to install in a case than an AIO which has a water block/pump, two hoses and a radiator with fans. Whilst I appreciate the convenience of an AIO and how good the water block looks on the motherboard, the simplicity of a quality, single-fan air cooler is also a huge attraction for me.