What did the gamers at Respawn LAN think?

We displayed the FRAGABYTE both open and closed up and our location near the entry way meant that most people had to walk past the setup at least twice. The Node 202 was clearly our most popular attraction and given the portable nature of a LAN it wasn’t surprising. Most of the gamers were interested in the PCIE riser and flat GPU implementation, however the tiny-but-quiet Noctua L9i CPU cooler also generated a lot of interest.  Most people liked the concept and would consider having something like this at home but the lack of internal storage space for 3.5″ hard drives was a subject that was raised often. As a console-sized build, it isn’t quite as small as a typical console but for the vast majority, it was close enough. At the end of the day, when you sit the Node 202 next to a 40″ LCD, it looks small but next to a 24″ LCD, the contrast in scale isn’t as impressive. Performance wise, the concept build surprised many if not most. 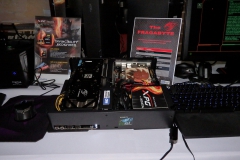 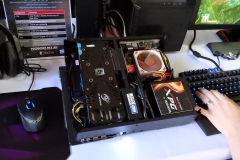 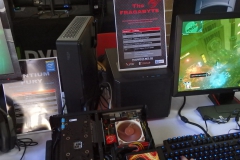 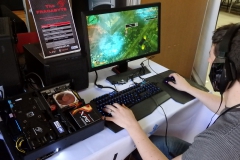 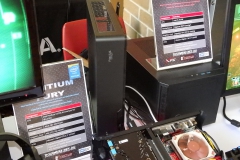 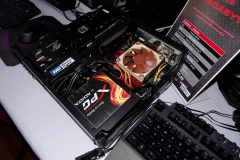 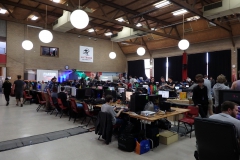 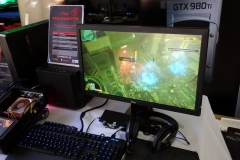 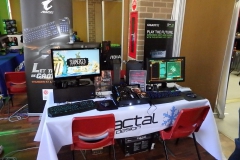 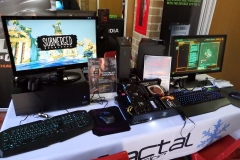 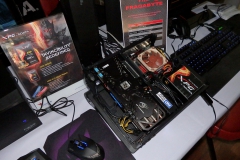 On-board WIFI, sound and killer LAN gave the system a high end finish and provided a great playing experience in every title we had installed.

They key is to select components carefully – going large with memory and SSDs always helps and ADATA had this covered with a generous 480GB SSD and 16GB of DDR3 RAM. This meant that we didn’t need to sacrifice any SSD space for virtual memory and we could load all the bigger titles on the fast SSD. We could have gone for a 2TB 2.5″ hard drive to keep the noise and heat down at the expense of speed but with the Western Digital 1TB 2.5″ Blue SSHD, we sacrificed some capacity for speed without compromising on noise or heat. The Noctua NH-L9i cooler also has a very low noise profile which meant that the only real sources of noise were the GPU fans and the SFX PSU fan. Keeping the load under 350W meant that the PSU load stayed under 80% and the PSU fan didn’t have to work too hard.

The graphics card accommodation is probably the trickiest part of the build due to the enclosed nature of the chamber. Make no mistake, when you’re gaming with all the eye-candy on, this part of the case gets warm – if not hot. The increased heat results in graphics card fans running at higher speed where they generate more noise. Whilst we could fit the Windforce 3x cooler into the chassis, a better option is a blower style cooler that expels the warm air out of the case and draws fresh air in through the dedicated vent. Fitting a single 15mm or 20mm thick fan will make a difference. We used a Deepcool 20mm thick 120mm fan to generate airflow and reduced the GPU temps by about 15C with a marginal increase in noise.

If you’re considering downsizing, we think it’s the way to go. Just be mindful that it’s much less forgiving on component selection and upgrading can be more tricky because you can’t go multiple GPU and you only have 2 RAM slots in an ITX form factor so make them count. Airflow doesn’t have to sound like a tornado but if you can get some kind of airflow in your case it will make a difference.

The Node 202 is a great case and was a blast to work with for this project but it does involve some compromises. Keep an eye out for our upcoming review of its sibling, the more versatile Fractal Design Core 500 ITX chassis.