We have tested the core components of the first build on the test bench to make sure that the 450W available were going to be enough. With a 450W PSU, we really wanted to limit the draw to around 375W if possible. The core components listed below would give us the performance we wanted, all we had to do was validate the power requirements.

The power draw under load was between 300~330W. The Integra 450W SFX PSU from Fractal Design should be adequate with a little headroom to spare.

There were 2 areas of concern relating to space – the CPU cooler clearance and the Graphics card length.

Noctua’s NH-L9i cooler will certainly meet the clearance limitation but requires space around the socket for mounting. Despite the TDP of our CPU, in testing the L9i kept our HASWELL i5-4670K CPU at or below 60C on the open test bench under load. Given that the Node 202 doesn’t have any active cooling or provision for it in the CPU chamber, we expected this to increase to around 75-80C under constant load due to the compromise of airflow.

The Gigabyte GTX 970 G1 Gaming graphics card is 312mm in length but we were hoping that the tolerance in the specifications would be enough to fit the larger card – it’s only a couple of millimetres out right?

It’s a shame that you also have to remove the base of the case to get to the dust filter but I can’t see any other way that Fractal Design could have implemented this whilst still keeping the Node 202 looking neat from the outside. Given that any filter is going to impede airflow, I’d be tempted to just remove the filters near the GPU and CPU and just give the PC a proper clean out every 6 months or so with some compressed air. This really depends on the environment and how much dust is around.

Everything just seemed to fit together – like Lego. I was surprised that I didn’t have to ‘persuade’ anything – especially the graphics card. The longer Windforce 3x cooler from Gigabyte went in without a drama – it should also be noted that the complex looking riser assembly is much easier to use than it looks.

The drive cage and Graphics card mount also come out for easier installation which significantly reduces the degree of difficulty when building in a case this small.

Not all ITX cases are able to support a CPU cut out but the Node 202 has one on the back and it’s fine it you end up needing to change the cooler or re-apply thermal paste at some stage. 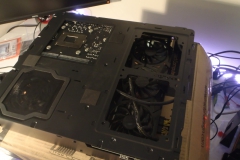 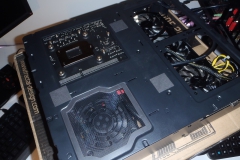 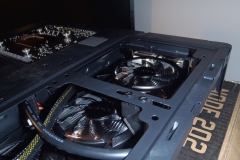 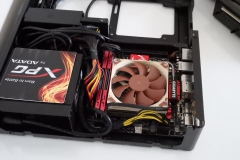 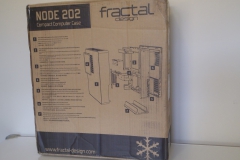 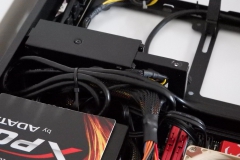 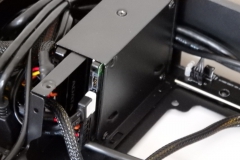 There is a sliding wedge shaped thing that provides support to the graphics card so that it doesn’t droop or bend if the Node202 is laid flat. This is also important because of the 90degree riser for the PCIE slot. The whole flat GPU approach works and is well executed. Although the specifications say the maximum graphics card length is 310mm, this is conservative and there is more room if you manage the cables. We were able to fit a Windforce 3x graphics card in there which is 312mm and still have room to spare. 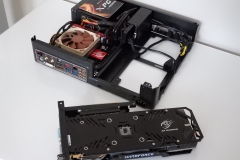 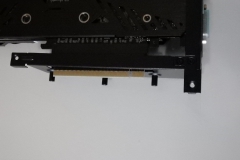 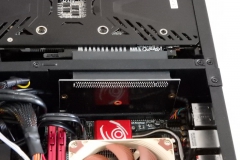 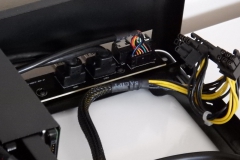 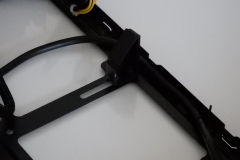 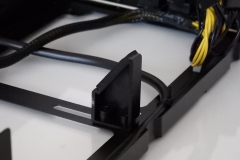 These can be attached to the 4 inner corners of the base to raise it up a few millimetres from the surface underneath. This would be ok for a low power graphics card but for our GTX970, things got a little warm and it preferred to be on the stand, mounted vertically.

The cable lengths are just right and due to the fact that components only go in one place, building with the Node 202 and SFX PSU is really simple. We only needed to use one zip tie to contain the cables in the space between the power supply and the hard drive cage. The case comes with a set of zip ties so we were good to go.

The Node 202 does have a physical limitation of 2×2.5″ drive slots. We found that it is best to install these in the mount and install the mount first – then cable to the drives. To make the most of this, we went with a Western Digital 1TB Blue SSHD for bulk store and an ADATA SX930 480GB SSD for the speedy boot drive and our primary AAA titles. The SX930 represents a solid choice for our boot drive giving us some snappy performance and a very quick boot time.

To make the most of our 480GB SSD, we also used an ADATA DDR3 – 16GB (2x8GB) of XPG V1 with Red head spreaders. Even though the case would be closed in general use, we know it’s in there and the red finish of the ADATA XPG looks great – even through the CPU vent of the case. Having 16GB means we don’t need any swap space or virtual memory for Windows to run our games so we free up valuable extra Gigabytes of space on that SSD.

If more storage than our 1TB + 480GB is required, the Z97N Gaming 5 has USB 3.0 ports for external hard drives and LAN/WIFI for NAS access. It also has eSATA on the rear I/O panel for older enclosures.

This is the biggest challenge – CPU cooler height was one thing but the lack of active cooling means that the warm air still has to exit the case. We also had to remember that the brief is for something that could sit in a lounge room so it needed to be quiet.

This is where we turned to Noctua. As a long-standing symbol of high quality case and CPU cooling products we reached out to them and received a NH-L9i cooler for the project. Despite the TDP of our cooler being on the edge of the rated capabilities – if not a little over –  we gave it a crack and found that we could consistently keep the CPU under 80C in the case without active ventilation. Even better was the fact that it still remained pretty quiet.

Cooling the graphics card was more of a concern. Whilst the long Gigabyte GTX970 G1Gaming card did fit, ventilation was limited and we found that the cooler did have to work pretty hard to keep the GPU cool in the confined space. The top temperature we saw was 80C but under general load and light gaming, the temperature sat in the 60-65C range. At idle, the factory overclocked Gigabyte G1 performance card was near silent. A graphics card with a stock cooler that exhausts air from the system would have been a better choice for the Node 202 but we couldn’t get our hands on one at the time. The gallery below illustrates the difference and the advantage of a shorter card. 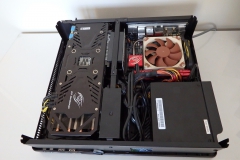 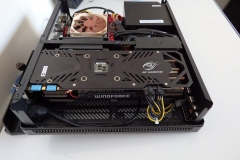 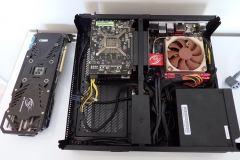 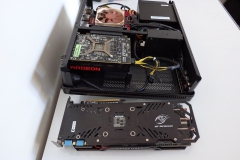 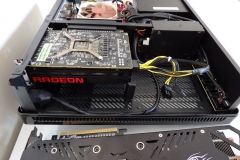