We tested the Nepton 120XL on our ASUS ROG test bench with the specifications listed below. We always re-baseline the fan profile in the FanXpert 2 software and run PWM mode in the ‘standard’ ASUS pre-set. The MSI GTX980 Gaming 4G is 100% silent when not under load because the fans actually stop, making it an even better choice than the incredibly quiet GTX 760 HAWK that we normally use. We want to ensure that we have as little noise as possible coming from the system so that we can isolate the sound from the CPU cooler itself.

To create a consistent loading on the CPU for each run, we ran Prime95 for 30 minutes after a 30 minute idle period. The maximum temperatures across all 4 cores were recorded and an average generated for the results. This is a synthetic load and the closest activity we have seen that comes close to the test is video encoding. Although many games are CPU intensive, none have punished our CPU in the same way as the Prime95 test so you could consider this a worst case scenario. 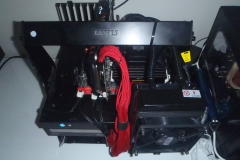 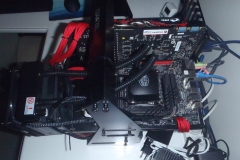 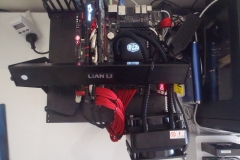 Let’s start with the PWM tests. PWM is where the motherboard uses the 4 wires to control the fans and adjusts the speed as per the software profile to maintain a temperature. The standard ASUS profile will increase the CPU fan speed as it gets warmer to maintain a temperature under 75 degrees. This means that the temperatures listed in the graph below don’t mean a great deal as all coolers will have different fan speeds to maintain the maximum temperatures listed. However the graph does show coolers that struggle to keep the CPU cool under extended load (high temperature results) and we do use this test to check how hard the CPU has to work at stock settings and when overclocked.

The maximum RPM hit on the “standard” PWM profile was 934 and the cooler remained barely audible as we were unable to get it to clearly register above ambient noise on our decibel meter. Performance wise, it was in the middle of the pack, on par with the Noctua U12S and U14S slim line tower coolers but lagging behind the larger 240mm Kelvin water cooler and the heavy duty 140mm heat sink towers.

When overclocked, we saw all coolers coming in within 52.3 and 53.45 degrees. The PWM profile had to push the coolers a lot harder with the fans needing to spin at 1931 RPM to maintain the thermal target set by the software. The fans were noticeable at this speed registering 24dBA on our decibel meter at 1m away. It’s worth noting that our definition of noticeable is when we walk into the room, we can hear the fans running over other ambient noise and easily identify the source of the noise. I’d describe the noise as a hum and the sound of moving air. We didn’t hear any whine, ticking or rattles from the Silencio fans at any point in our testing.

At 12v under stock CPU conditions (above), the Nepton 120XL was on par with the other coolers. The stock CPU volts don’t really push the temperatures much and the above results are not as telling as the numbers we see when overclocking to 4.5GHz @ 1.29v (below).

Thermally, the Nepton 120XL held out well at 12v but there is a 2 degree gap between it and the bigger coolers. The score is respectable and makes us wonder what the larger Nepton 240mm variant would achieve.

Acoustically, at 12v, the Nepton 120XL fans registered 27dBA on our decibel meter at 1m away. We would call the noise at 2500 RPM loud in that when we walked into the room, not only was it the first thing we noticed but I wouldn’t want to be gaming on it at that speed for even a short period of time. At ~1930 RPM under load in an overclocking test under PWM mode, the noise was noticeable but not uncomfortable or what I’d consider to be a concern. It seems that the 500 RPM beyond the PWM test was enough to make the noise more noticeable in either pitch or simple dBA rating. It’s a good thing that this is a synthetic test and a situation that won’t occur in normal use.

The idle temperatures were all consistent and in line with other performance coolers. Measuring idle temps can be finicky due to minor fluctuation among the ‘idle’ processes so we don’t give it much weight. Typically we expect delta temperatures around 8 degrees mark as a standard and the Nepton 120XL in all fan modes gave us an average of 8.2 degrees above ambient in our testing. What this shows is that we had a good ‘mount’ of the water block to the CPU.

The Nepton 120XL managed our Haswell i5-4670K at stock settings or overclocked in both the excessive synthetic benchmarks and in extended gaming sessions. With the CPU at stock, the cooler ran only a 130 RPM above its idle speed to maintain a respectable 38.5 degree delta temperature over ambient whilst remaining whisper quiet. When it came to overclocking, the temperatures increased as expected as did the fan speeds pushing the cooler to a much more audible level as we have seen with other 120 and 140mm tower heat sink coolers.

As always, it is also worth noting that the load testing of Prime95 is a worst case scenario – even when playing CPU intensive games for hours, we don’t see anywhere near the same temperatures or load on the coolers in normal usage. The tests do show the capability of the coolers in a consistent way making for a balanced comparison.

The other factor not reflected in any of the graphs is the pump speed. For testing purposes, we ran the pump at 12v but our Fan Xpert 2 software from ASUS recognised the pump as a fan and after ‘tuning’ the software to align with the pump, the software determined that the pump could operate between 1700 and 2700 speeds. The thermal performance was different by 1.5-2 degrees under stock CPU conditions and 2.5-3 degrees when overclocking. At 12v/full speed, the pump unit is still quiet but we did notice that there was regular ‘trickling’ noise from the end tank. This isn’t a major problem but it is a little unnerving. When we let the software on our ASUS Maximus VI Gene motherboard control the pump via the Chassis_fan_3 header, it dropped down to 1700 rpm most of the time, making the pump and flow noise profile basically inaudible.