The following tests were run in our Fractal Design Define R3 with the side panel open so we could hear the noise made by the NH-9i. The fans were configured to run off the ASUS Standard PWM profile – we did not use the included voltage regulator / Low Noise Adapter due to the TDP of our i5-2500K CPU being 95W and at the upper limit of the cooler specification. We recorded the delta temperatures – the difference between the reported CPU temperature and the ambient room temperature. In order to record a valid result, the ambient room temperature has to remain the same from the start of the test to the end of the test and must be between 18 and 24 degrees. p
Test Rig

The case looked seriously empty when we installed the NH-L9i and I didn’t really appreciate how low it was until I took a couple of really awkward photos from inside the case to see how much it cleared the capacitors by. After taking the photos, I slid a thin piece of card around the edges of the cooler to see of it was making contact with any capacitors and was both relieved and surprised to see that it wasn’t touching anything. This is an example of precision engineering if ever I’ve seen it – I’m talking “millimetre perfect” here. 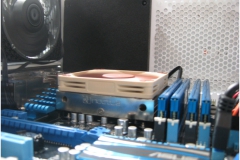 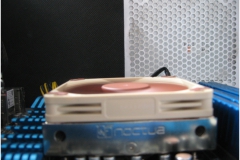 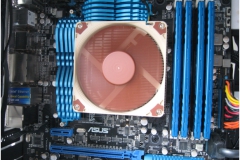 Notes:
1. The NH-D14 does not have PWM capability and as such, there are no results for that product in PWM mode.
2. The NH-L12 when operating with only the 90 mm NF-B9 fan was not able to adequately cool the 2500K when overclocked at 1.288v and belted with Prime95 so these tests were omitted as the results couldn’t be finalised.
3. The NH-L9i was only tested in PWM mode with the CPU at stock volts due to the TDP limits and intended use of the product. We did not even attempt to test the NH-L9i with the i5-2500K overclocked.

When running the NH-L9i with an i5-2500K at stock settings were not much different to our NH-L12 single fan results and still well within the boundaries of safe. 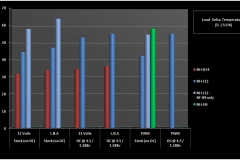 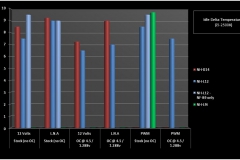