Installation of the CPU cooler was a breeze. I used my thermal compound of choice, the non conductive Noctual NH-11. The usual rice grain method did the trick, followed by the fitting of the stock cooler without any spreading or smoothing out prior. As usual, I made a mental note to check the temperatures later with the sides off and “re-seat” it if they look high. The power cable for the cooler was routed under the mounting catch, around the side of the heat sink and into the motherboard header to try to make in as neat as practical. When mounting stock coolers, I like to make the fan cables as easy to access as possible in case I need to refit the cooler later or replace it with something better later on. Case fans are a different story and I’ll always try to route them out of sight. 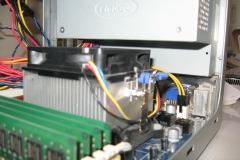 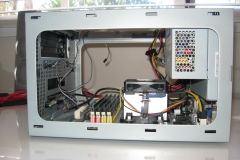 When working with a small form factor build, it’s a given that cable management will be tricky but it’s a good idea to make things as neat as you can so that you can do maintenance or upgrades more easily later and, more importantly, to improve airflow so the fans don’t have to work so hard (loud) to keep chipsets cool.

Unigen wasn’t going to be necessary here with onboard HD3000 graphics, but I did want to give the CPU a decent kicking and make sure that the thermal compound was properly applied. I also wanted to make the stock cooler work as hard as I could in order to determine how loud it was outside the case once all the panels were secured back in place.

I used the Folding @ Home client to give the CPU something to think about. The CPU maxed out at 60 degrees with the side panels on which is in line with what I was expecting as the CPU never broke 60 in the previous much larger case, despite the lack of maintenance.

It’s worth noting that the pitch of the stock cooler whine was something that I, personally, would not be happy to live with. Whilst it wasn’t offensively loud, at full tilt, the fan was noticeable. The new owner felt that the workstation was significantly less noisy than his previous PC so I guess it all comes down to perspective.

The system after final assembly, sitting on my work bench. The keyboard and screen are part of my test setup but they give some perspective on how small a footprint this desktop requires. The finished build was exactly what my friend was after. He uses his laptops for his photos and article work but when it comes to printing, main file store, backups and scanning; he really needs a dedicated workstation.

This case would be fine for small form factor office PCs and a HTPC at a stretch but due to the 350W PSU, the cramped internals and low ventilation, I can’t imagine how you could build a moderately powerful gaming configuration in this case without significant modding.

The case itself is a few years old and there are better options around at the moment for enthusiast builds but for a workstation, it’s still a worthy option. The build itself was fun and rewarding – and it’s given us the bug for small form factor builds of a performance nature.