The aftermath of an upgrade – some kit is just too good for a hard waste collection but not good enough for ebay. That’s right folks, this isn’t bleeding edge gear but who doesn’t like a build log?

I was pondering what to do with my previous home server, having built a brand spanking new one. It was still ok but I didn’t have a need for it or any of it’s components anymore. Originally, I’d built the previous server out of a retired gaming case and some HTPC parts. It served me well until I had to start rendering videos and running the odd virtual machine – at this point the Dual Core AMD processor started to reach its limitations.

Like any enthusiast, I can’t bring myself to toss out gear that still has some life left in it. My search to find a suitable home for the redundant kit didn’t take long – a friend had a need for a low level research workstation/print server. As a photo journalist, he was after a PC that could be permanently connected to his scanner/printers, store backups of his laptops and also handle print jobs from the wireless devices in his house.  No gaming here apart from the odd Solitaire or Minesweeper but any build is good practice and an excuse to tinker.

The Skeleton In the Closet

I had thrown my previous server together in a hurry, done absolutely no cable management and left it in the corner of my office to serve its purpose. Unloved and never really finished properly, this server didn’t miss a beat for almost 3 years and when I pulled it out of the corner I realised the shame of my build effort and ongoing maintenance. See the photos below of how not to cable a PC build. *facepalm*

The specifications of my previous server were:

Straight away, you can see the miss-match – I have a small form factor motherboard in a big heavy PC case – but it worked like a charm when in service. 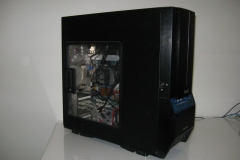 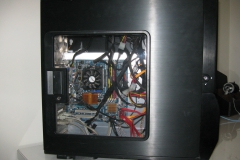 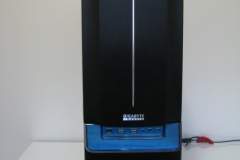 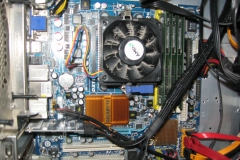 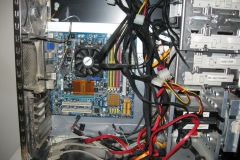 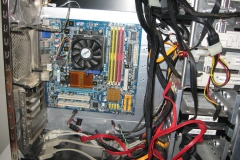