Kingston has been a player in the memory and storage space since 1987 with a strong reputation and product stack in RAM, SSDs, memory cards and USB flash drives. We were able to get our hands on their new KC2500 NVMe PCIe SSD for testing and it is certainly worth a look if you’re in the market for a new SSD. 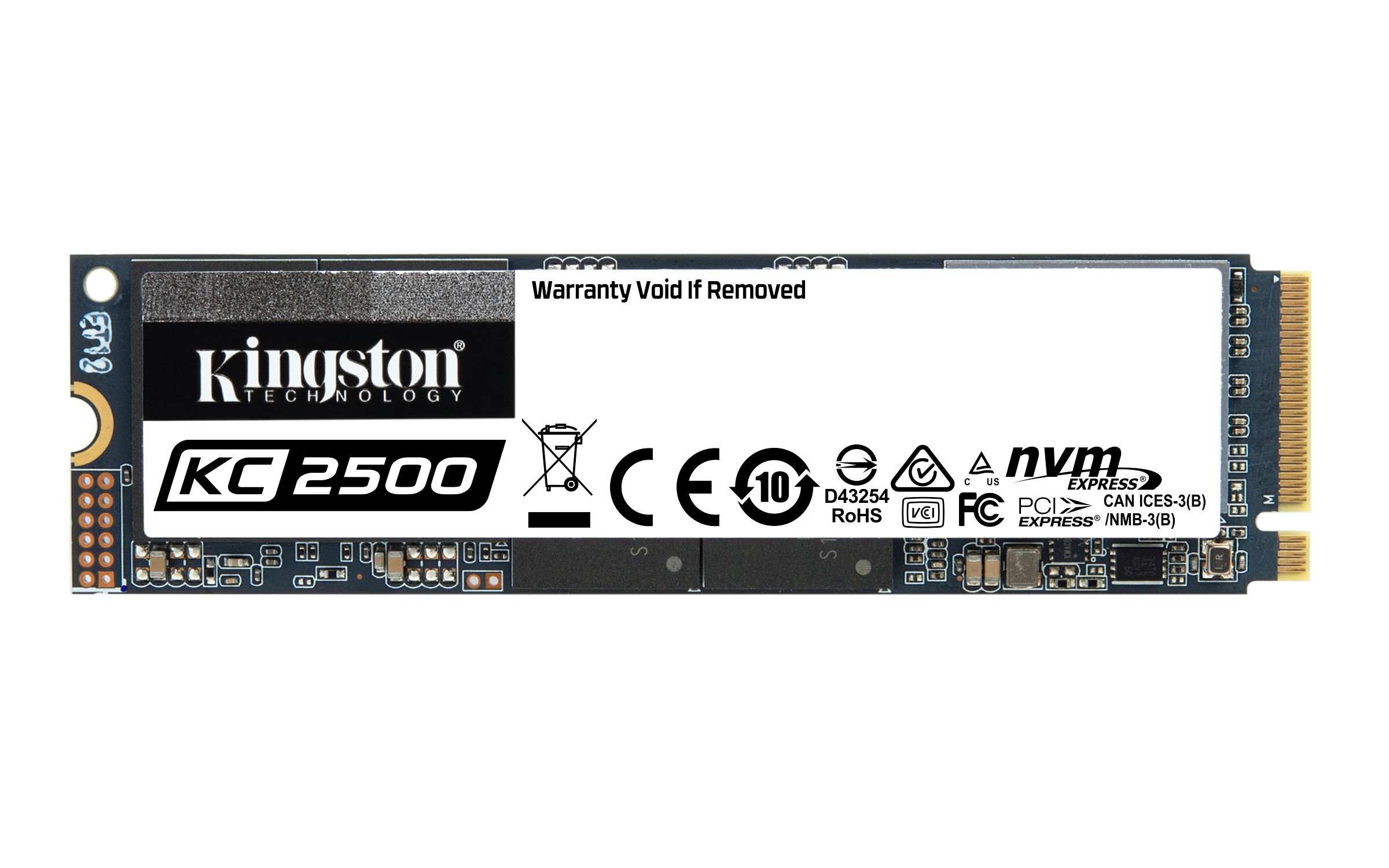 Considering a new build or perhaps upgrading? NVMe PCIe drives are significantly faster than SATA SSDs but they do cost more. In our testing, I’ll be comparing the performance of the Kingston KC2500 with a typical SATA SSD and a smaller 250GB NVMe SSD that represents the entry-level capacity. Either way, the comparison is intended to represent the performance difference between the Kingston KC2500 1TB M.2 PCIe NVMe SSD and what some people may be considering upgrading from. The benchmarks will also validate the performance claims made by Kingston on the specification sheets. 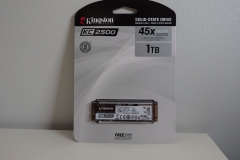 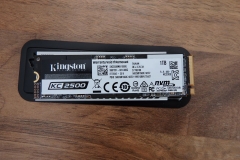 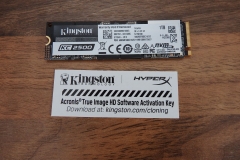 Kingston has implemented the newer SMI SM2262EN controller as opposed to the older SM2262 alternative. The SM2262EN looks to be essentially the same as the SM2262 but the newer revision has enhanced firmware and storage algorithms that deliver slightly faster read speeds and significantly faster write performance when compared to its predecessor. The NAND is 96-layer 3D TLC with a Total Bytes Written (TBW) rating of 600TB to indicate durability.

There are four versions of the KC2500 available:

The performance rating varies between the models, as shown in the specifications chart but all KC2500 SSDs are sold with a limited 5-year warranty and free technical support through Kingston.

Kingston also includes a software license key for Acronis True Image OEM. This software allows you to easily migrate from another system drive (SSD or hard drive) without needing to reinstall the operating system. For our testing we did a fresh installation anyway but having used the software before, we would rather see this included than not and it is a good value-add from Kingston.

I’d considered the entry-level sweet spot for SSD capacity to be about the 250GB mark until recently – now I tend to recommend at least 500GB, though games like COD Warzone, Battlefield V, Red Dead Redemption 2 and others are really pushing this with installation requirements ranging from 80GB through to over 200GB. With that in mind, a fast 1TB NVMe SSD isn’t such a bad idea and it also means fewer cables and a faster install if you’re building the rig yourself.

The street price for the 1TB KC2500 is a little under $300AUD which is going to place it in or above the mid-tier system price point but there are lower capacity models available to suit different budgets.

When choosing an SSD or hard drive, the warranty and brand reputation should also be carefully considered. This component will store your data and probably your operating system. If it fails, even with a backup routine in place, replacing a system drive can still be a major inconvenience so I always recommend looking at verified user reviews for specific models and where possible going with a brand that has a positive and/or proven reputation.

As a brand, we have a lot of confidence in Kingston and HyperX because we’ve never had one of their products fail despite using quite a few. If I look at SSDs and take two examples from the equipment currently in use,

Both have been solid and pass all drive tests.

In addition to that, we also have other Kingston/HyperX SSDs and memory in use across several systems without any failures or stability concerns.

The Kingston KC2500 has built-in encryption capabilities compatible with XTS-AES 256 bit. This means that when using the KC2500 as an encrypted drive, the encryption can happen at a hardware level and it will have little impact on system performance when compared to a software encryption solution that uses the CPU to do the heavy lifting as it encrypts and decrypts data for use.

In terms of compatibility, the KC2500 is compliant with TCG Opal 2.0 security management solutions and supported by several software vendors including McAfee, Symanetc and WinMagic. The KC2500 is also compatible with Microsoft BitLocker  with built-in eDrive support.

We used the test system below for our testing. 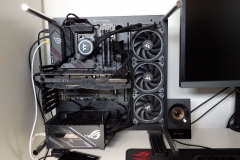 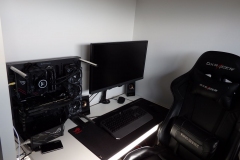 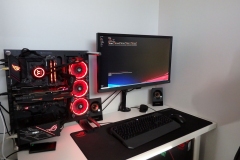 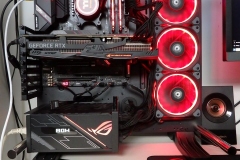 The ADATA SU900 SATA SSD is intended to be a reference point for anyone considering an upgrade from a SATA SSD and the 250GB Samsung EVO 970 is intended to represent an alternative ‘Gold Standard’ NVMe SSD in a smaller capacity with a different controller.

*Please note that the ADATA SU900 is a good, reliable drive with typical speeds for a SATA SSD – it is going to look bad in comparison but the same could be said of any SSD of this type in the following tests.

I didn’t have access to any other 1TB NVMe SSDs for comparison, but this testing should demonstrate a clear difference between the technologies available and also show where the Kingston KC2500 SSD sits.

There are a lot of numbers in the graphs with some displaying notable differences, whilst others show little variation across the different configurations. There is also reference to queues and threads in addition to the transfer speeds. Queues refer to the number of files and threads indicate how many simultaneous transfer operations.

To make these results a little easier to interpret I’ve listed some rules of thumb below:

Hopefully, there will be a test in the benchmarks below that represents how you use your system most of the time. 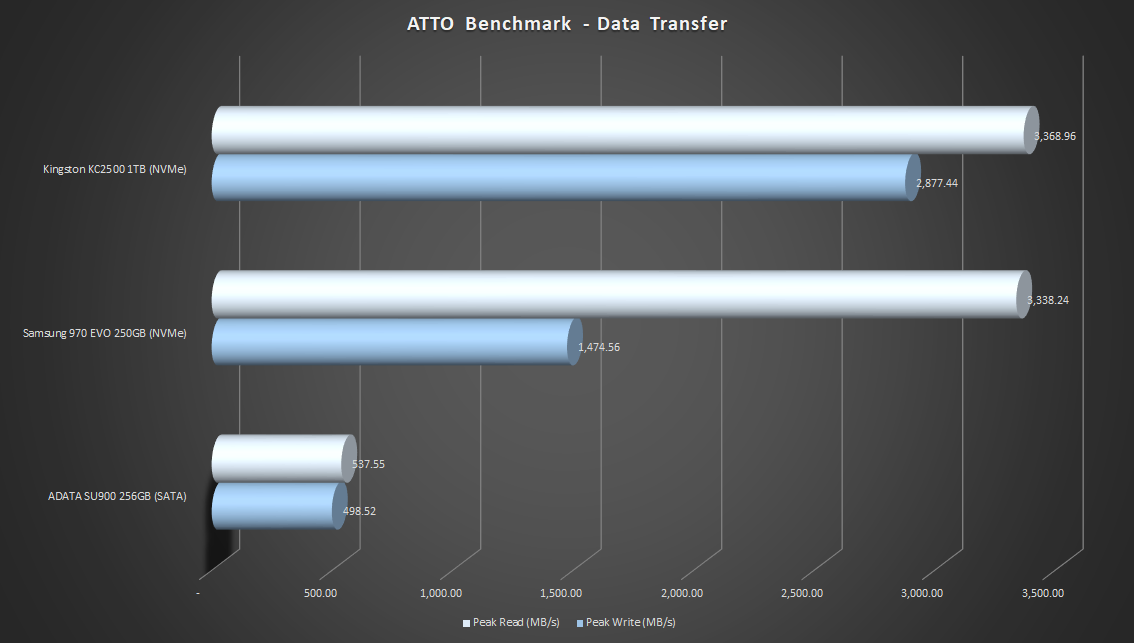 As expected, despite some solid SATA performance, the PCIe M.2 devices make the SATA SSD look slow. Keep this in mind when comparing the price per GB of SATA SSDs to PCIe NVMe alternatives. 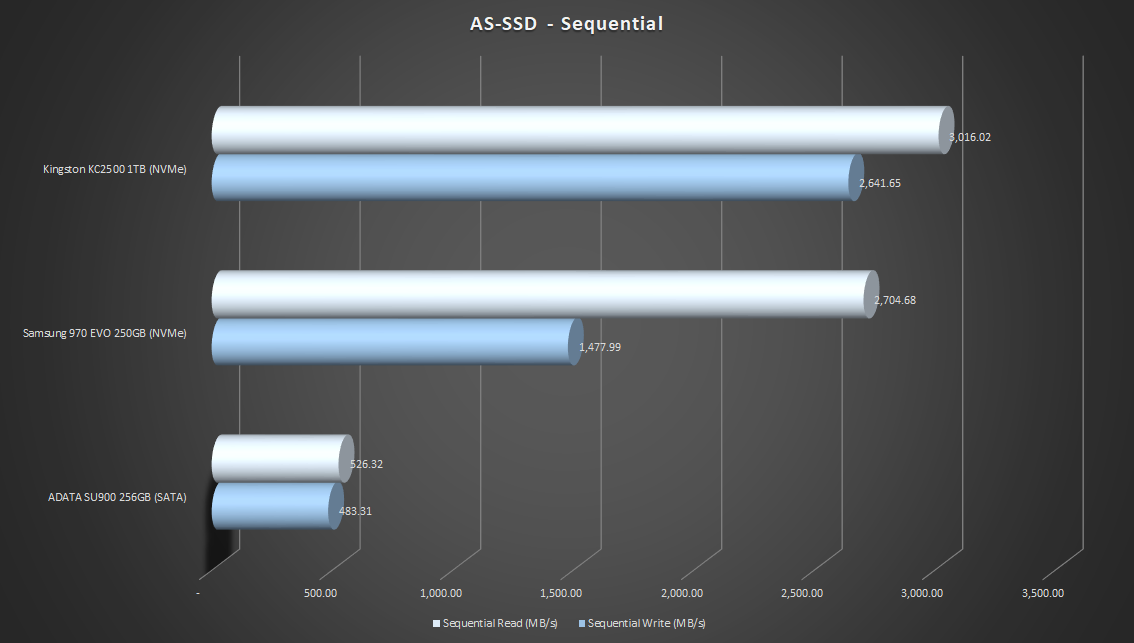 This test is consistent with the ATTO peak speed results and shows the 1TB Kingston KC2500 on top in both reads and writes with a much larger lead in sequential writes. 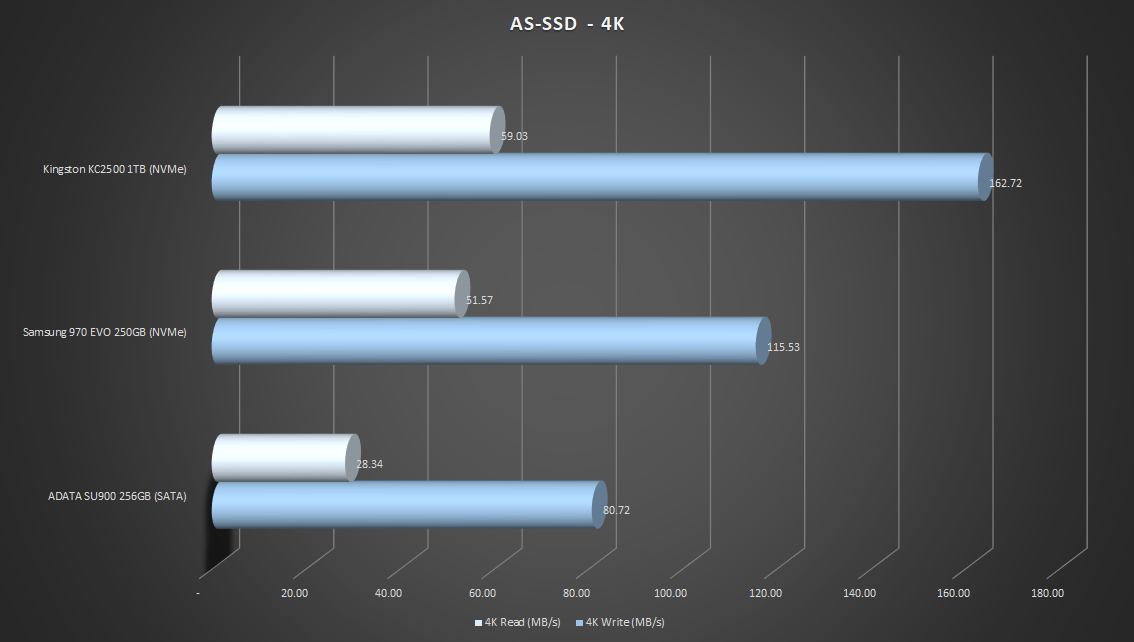 The 4K Random performance levels out the field a little more as the transfer speed is not capped in the same way. 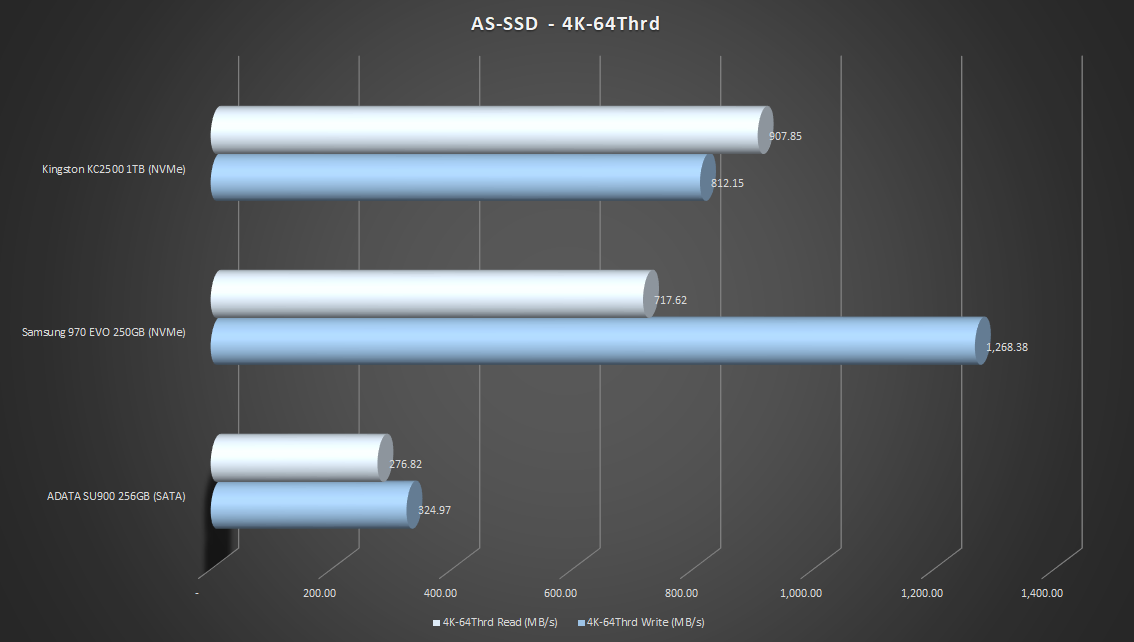 4K-64Thread performance represents heavy multitasking scenarios. This result has the KC2500 ahead in read performance but lacking in write performance under this scenario when compared to the smaller capacity 250GB Samsung Evo. 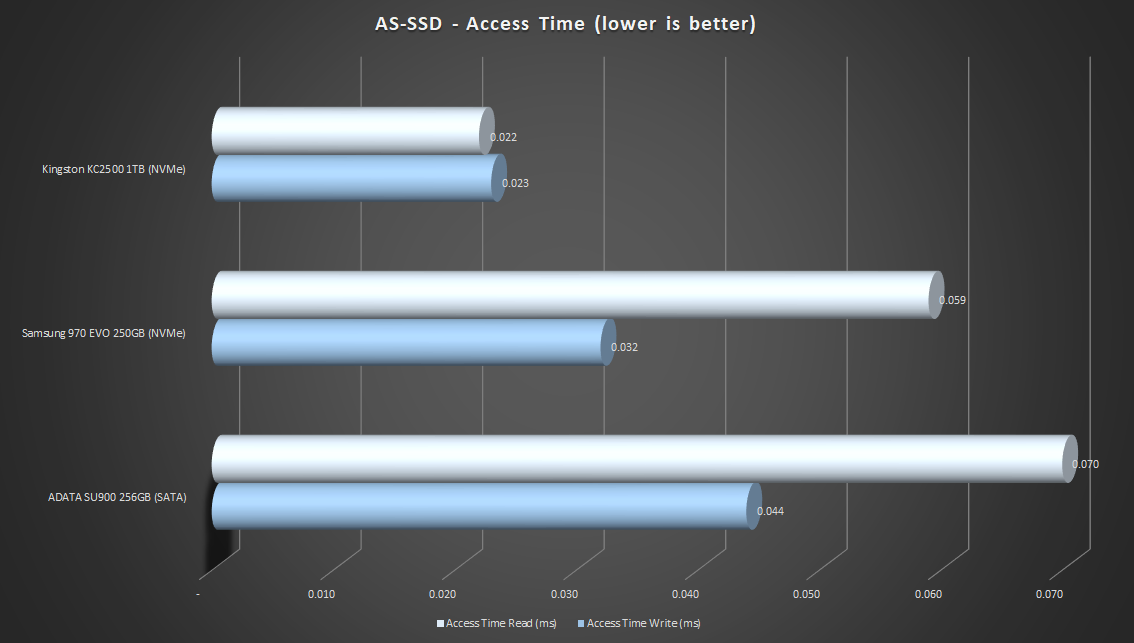 The access time is significantly better for the KC2500 in terms of reads and also ahead for writes. 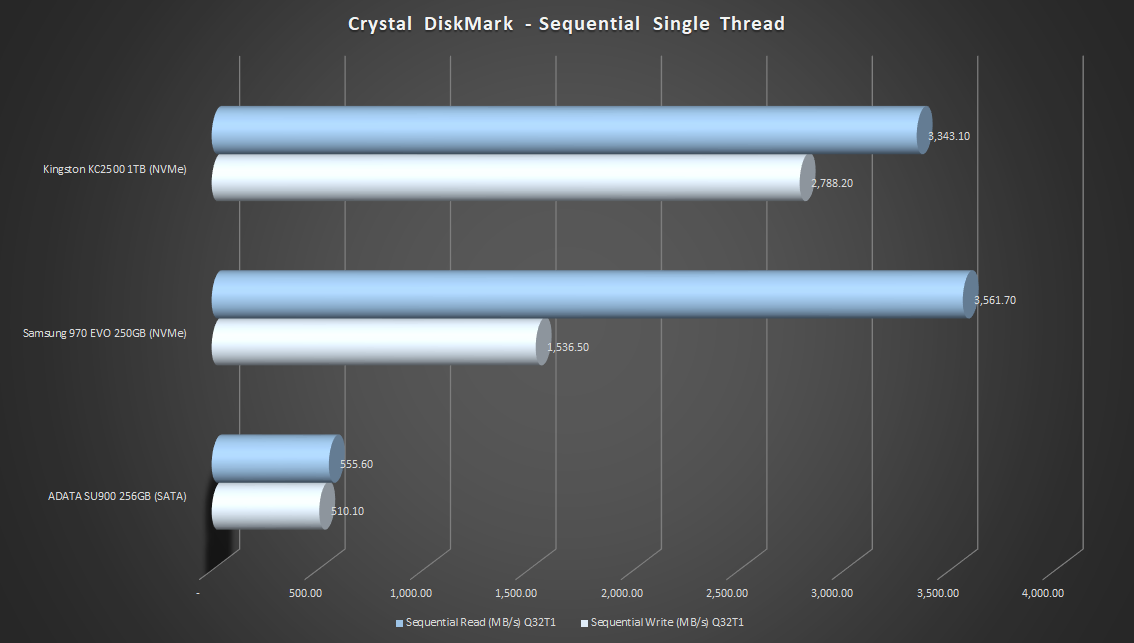 The Crystal DiskMark sequential test has the smaller Samsung 970 Evo 250GB slightly ahead in reads but significantly behind in writes. 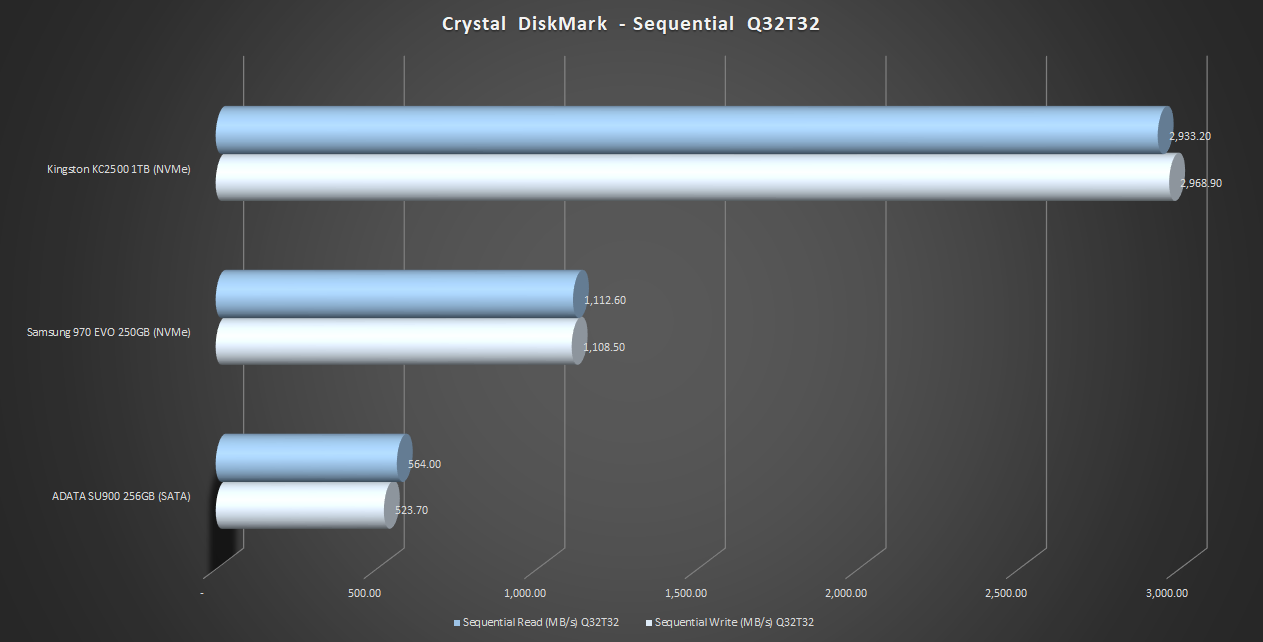 The above benchmark shows what happens when we queue up 32 files and choose 32 threads for the sequential data payload transfer. This is a demonstration of loading or copying large files either in small numbers or in large volumes with a multi-tasking focus. 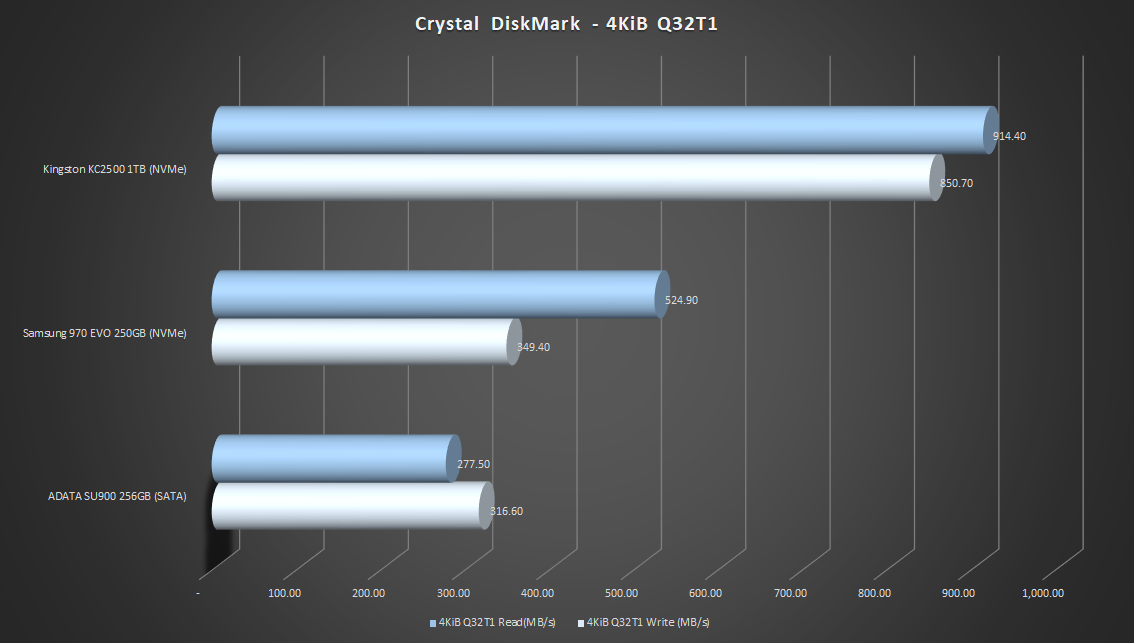 In a single-threaded test with a large queue of small files, the KC2500 1TB stands out from smaller alternatives. 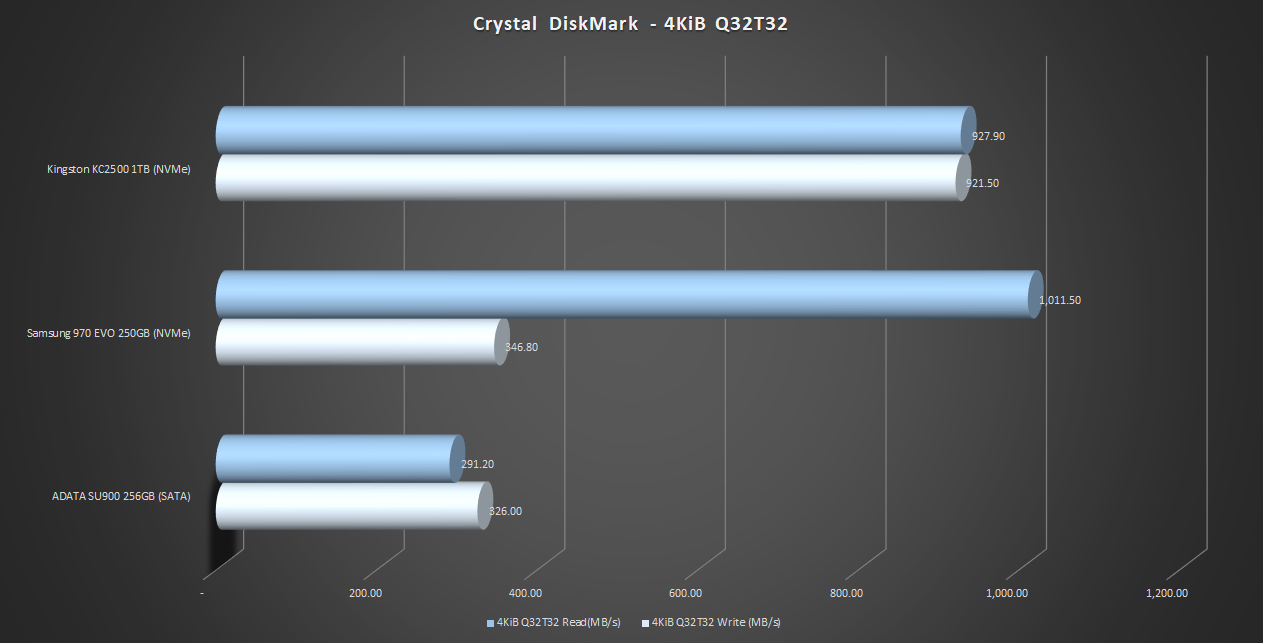 This test is the same as the previous but with 32 threads in play. Note the consistent performance with read/write activities on the KC2500 and the very different read/write results of the Samsung 970 Evo NVME drive. The 970 Evo is faster when reading but falls short when writing. 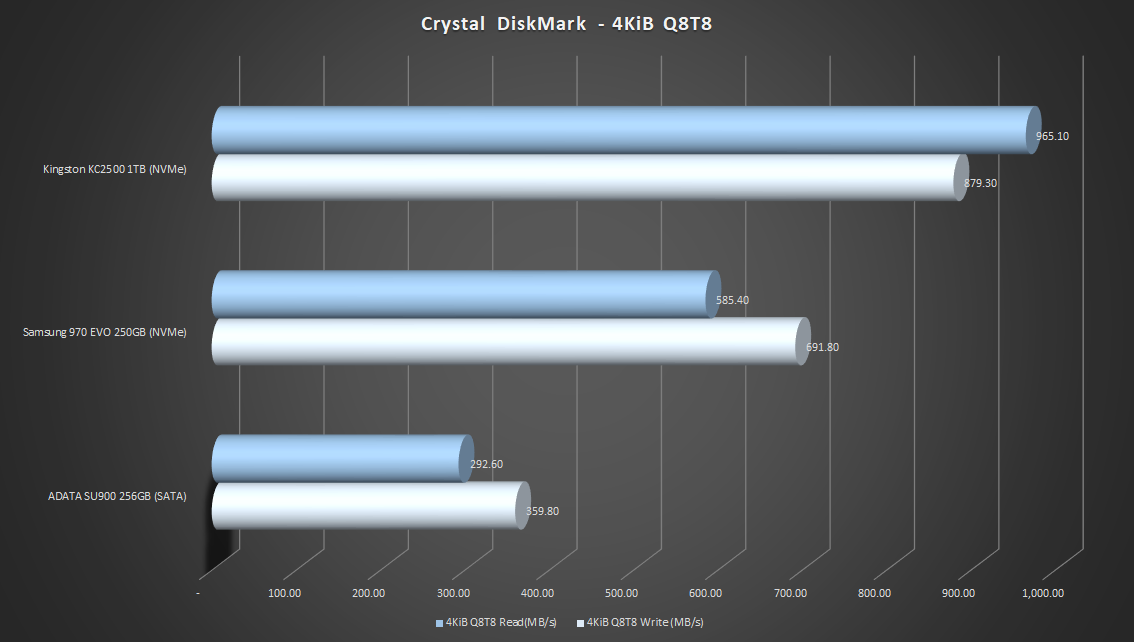 4K performance with a moderate queue depth and 8 threads had the KC2500 1TB leading the chart here as well. 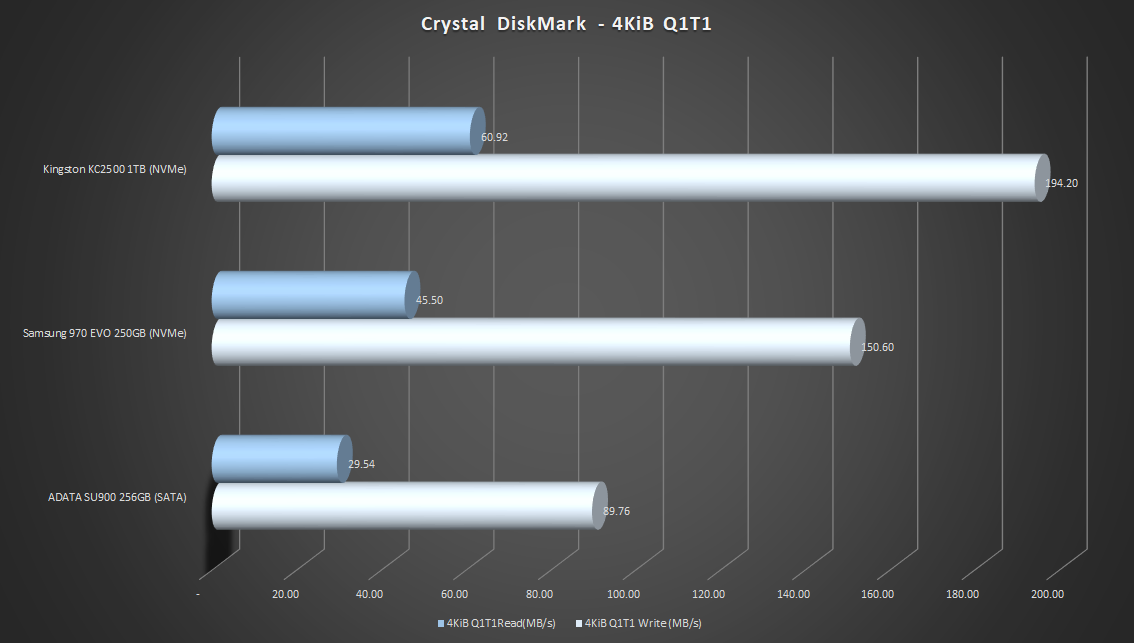 There are a lot of benchmark results from the Anvil Storage Utilities test, some with MB/s and some measured in IOPS. The trend is aligned with the other benchmarks so I’ll summarise at the end. 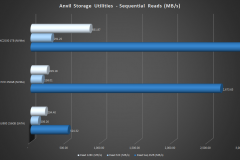 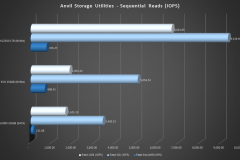 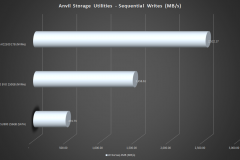 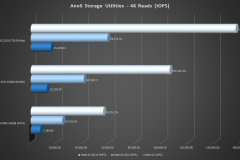 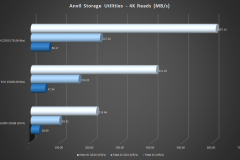 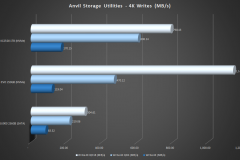 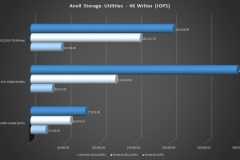 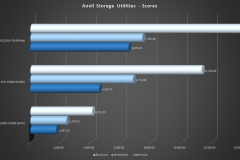 Sequential read testing showed that the KC2500 1TB was a step up from the smaller M.2 SSD and a big leap from a typical SATA drive.

Aside from the 4K writes with a queue depth of 16, the KC2500 1TB was a clear leader in all tests – consistent with the other benchmarking tests.

Aside from the storage benchmarks, I also executed some Blender runs using the Classroom CPU benchmark file to see if there was any difference and the results were all within margin for error.

This was also true of the compression tests where I used a 2.7GB .tar archive containing over 50,000 files in almost 7,000 folders. The archive extracted in the same duration regardless of the storage configuration. The 4K read/write performance gap was more pronounced in the synthetic benchmarks than what I encountered in real life.

The following list of games with their installation folder sizes shows how much data PC gamers need to load in 2020.

Granted, the games don’t have to load all of that data at once and some open-world games do a good job of concealing load screens by limiting the speed of player movement but textures, assets and maps have to be loaded at some point.

Overall, I didn’t identify a difference in performance between the two M.2 SSDs outside of the benchmarks so if you already have a 250GB NVMe drive equivalent to the Samsung EVO and you’re looking for something larger, the extra capacity of the 1TB Kingston KC2500 is the only thing you will likely notice.

If you are upgrading from a SATA SSD, expect to see an improvement in load times, particularly for larger game installations such as the examples listed above.

I like the KC2500 – it is simple, affordable and performs per the specifications provided. System boot and general performance were great with our test bench feeling very responsive and I did not have any issues with lag, delays or slow read/write times. Both the BIOS and Windows installer found the KC2500 without any issues for a speedy installation.

The packet and the drive itself are relatively plain to look at – which is perfectly fine with me. The packet gets tossed during installation and most motherboards come with a heat sink or at least some kind of heat shield. I would prefer my M.2 drives without any pre-applied heatsink/heat shield as it makes them easier to install and compatible with more motherboards.

At $289 for the 1TB as reviewed here, the street price is competitive. The value add of the ACRONIS TrueImage HD software should not be overlooked. This is decent, useful software that will speed up a transition so you can get back to using your system as soon as possible.

The performance results, durability rating and our experience with previous Kingston storage and memory products mean that we would readily recommend the KC2500 SSD for any system from a basic PC/laptop to an enthusiast-level system.

For system builders, if you look at the trend of data and note the rate it is increasing in size for everything from photos, media and games, it makes complete sense to upsize your SSD wherever possible. The benchmarks show that the larger 1TB KC2500 will give you more room to grow and better performance than a typical 250GB NVMe SSD. Sure, the price is higher but you will end up with a better build that will result in fewer storage compromises. The price per GB is also more compelling in the 1TB space.

The KC2500 1TB M.2 NVMe SSD is a solid option for your next build or upgrade.