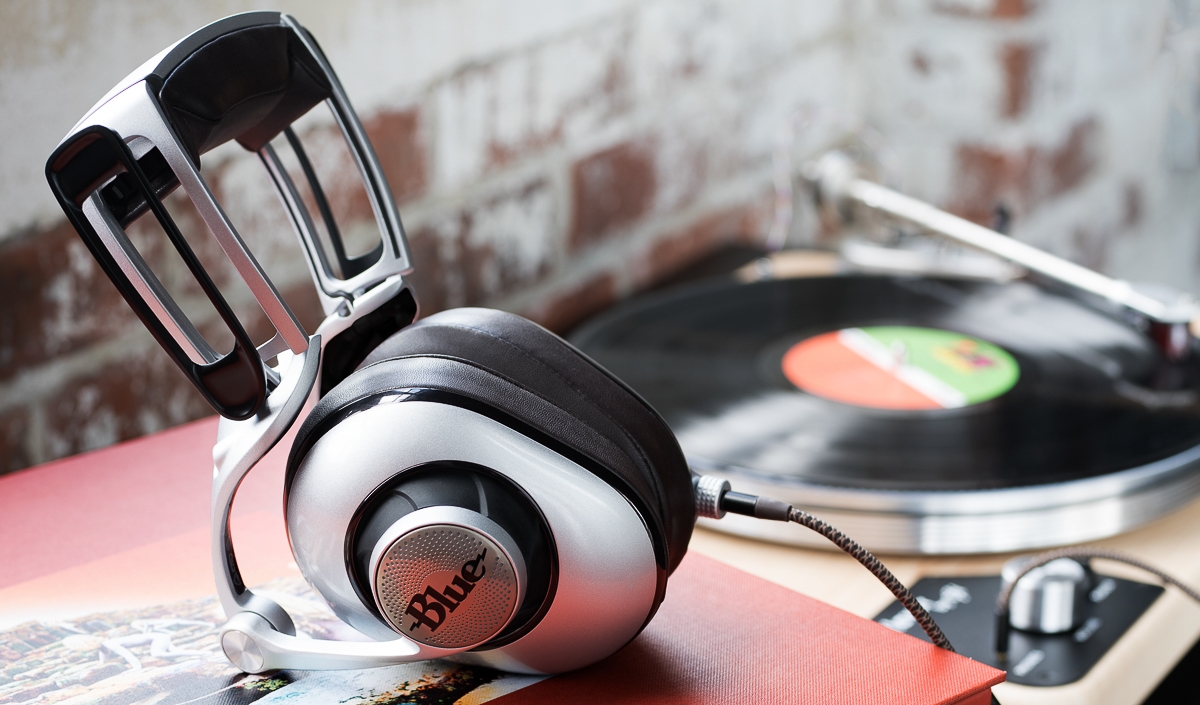 No doubts about it I am a headphone junkie. Prolific work travel for over 20 years and a dysfunctional relationship with airplanes started my journey with one of the first iPods and it has continued year after year chasing better sound in the hopes of it imparting a calming force for 10-12 hours of turbulence. Couple that with a constant battle on the home front over musical taste and volume personal listening has been my respite. The evidence lies in the collection of media players, headphone amps and headphones themselves in the collection; all of which get a run from time to time.

Several years ago I shelled out for my first pair of magnetic planar headphones, hoping to get close to the responsiveness of electrostatics without the dedicated amplifier and complete lack of portability. I was suitably impressed but the weight of these behemoths kept listening time down to an hour and kept them tied to the home system.

Since then many companies have started to reduce the weight and popularity I suspect has brought in less expensive models also, so I was excited and surprised to take a look at this offering from Blue Microphones. Surprised as I am a long time owner of some of their microphones including the famous “Bottle” which has been my go to vocal microphone for years but never realized they had taken on the headphone challenge. Excited to see something in a reasonable price and weight range with some modern touches.

Opening the box reveals the headphones sitting up as if on a pedestal ready to take on the world. Understanding it is really a one-time thing, it is still a pleasant experience when a new box arrives and the packaging does set the expectation. It is solid and as mentioned presents the product well. 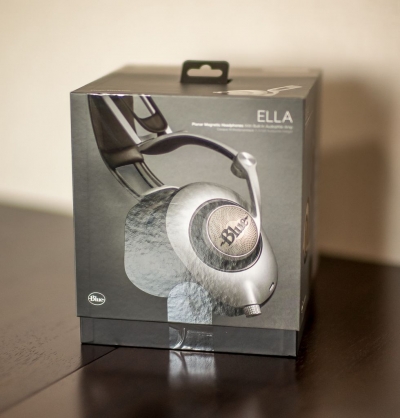 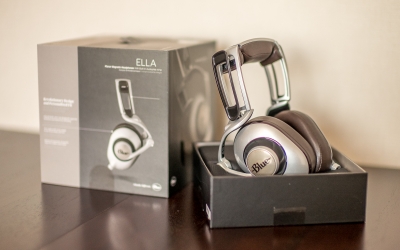 While aftermarket cabling is all the rage in the headphone space it often leads to quite depressing cabling being provided as standard. Not so with the Ella’s a trio of cables is provided with solid terminators and stress relief and gold-plated terminators on the audio cables. One cable is provided for pure audio, a second including a microphone to double up for phone connection. Lastly a USB cable to charge the inbuilt battery for the amplifier also with the nicely cotton braided cable is included along with an adaptor for 3.5mm to 6.5mm phone plug usage.

Documentation is short and to the point, highlighting the basic operations, plugging in the cables and charging directions.

On first feel and fitting the Ella was heavier than I expected from the look but at under 500g it is light compared to my regular planar magnetic cans. Finish build quality was high for this price range and no blemishes or build issues were on the pair. The fit was much different than I had experienced with similar headphones with the headband leaned forward with the cups covering the ear. The Blue Designs website points to this and the earcup design as quite innovative and delivering “revolutionary form and functionality”. It definitely is different and does result in a solid fit without too much pressure on the head. (NOTE: After later listening this design proves itself quite impressive particularly in comfort of the earcups and weight distribution and I was able to enjoy multiple hours of listening without fatigue).

With the mechanics and fitting out of the way I plugged them into my MacBook Pro and ran a 24hr playlist through them to burn them in, charged up the battery and took them for ride. 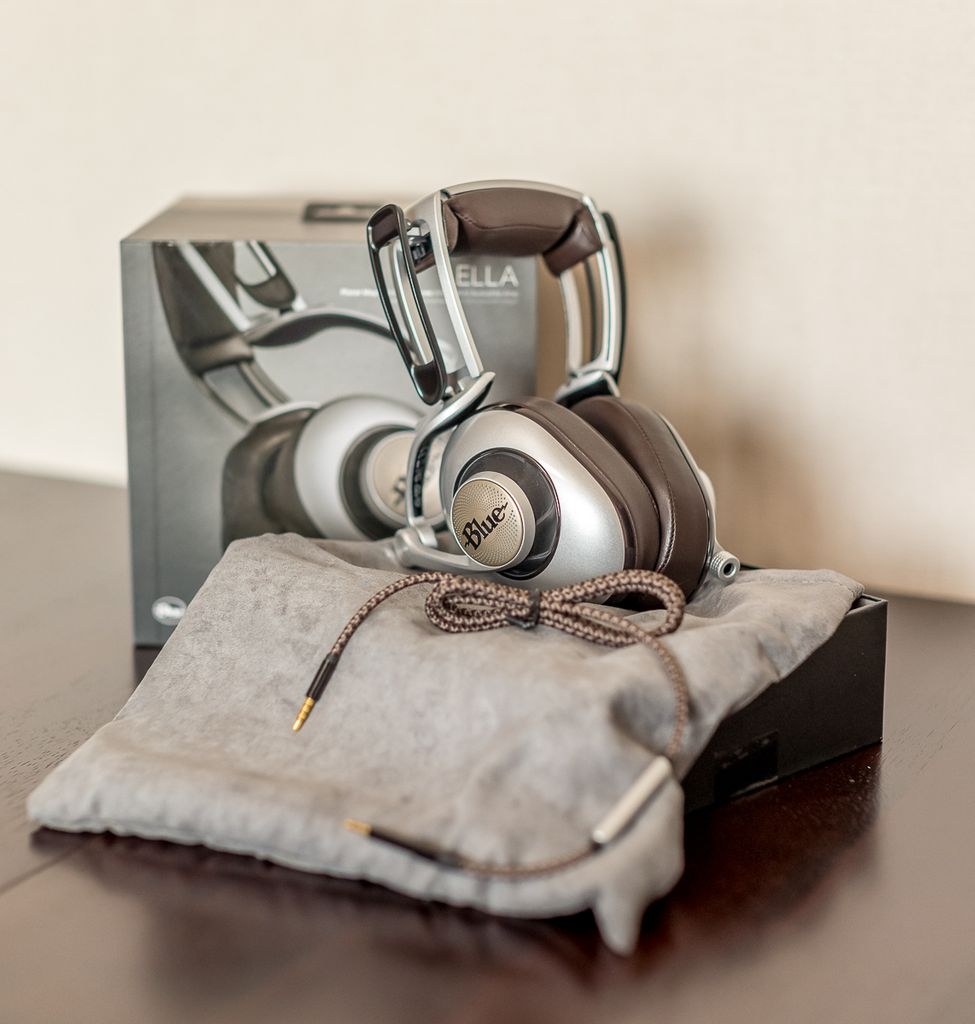 Now for some listening

Past experience has shown me that planar magnetics can take a bit of power to drive them so I chose to try them across a number of sources; digital files were played through either an Astell & Kern SP1000M or a Chord Hugo DAC. The SP1000M files were sourced from either its internal memory or my streaming client running in offline mode (TIDAL). For the Hugo, connection was made to my MacBook Pro using JRiver Media Player for files and the TIDAL Mac client for streaming.

I have been a TIDAL user almost from its inception as it provides streaming in “Hi-Fi” quality (not compressed, CD Quality) and more recently has provided a wide selection of albums in “Master” quality using the MQA process which allows a normal CD Quality file size, or in fact a CD to transport higher resolution audio (for those who want to geek out, please see a description of the process here).

First stop, the blues. Overall the sound was quite articulate without being too analytical. The stereo image was pronounced but not overly so and I did not feel the need to add any significant amount of crossfeed to adjust for this.

The Ella’s handled the mix of thick low end riffs and smooth bluesy lead tones in “Half Blues” (in 24bit 96k from “Burn to Grow” – Josh Smith) without being at all veiled and let the organ wail wash in from the background. In fact I listened to the entire album on my first pass with the Ella’s and it didn’t go wrong with any track. Then on “1968” (in 24bit 96k from “Now” by Jeff MacErlain featuring Robben Ford) the glorious fuzz sound on the guitar was portrayed without any “icepick” high frequencies that slower response drivers may exhibit.

Finishing this session was the latest album from Doyle Bramhall II (Shades from TIDAL in MQA) which is a much more laid back release than I have come to expect from him, certainly much less aggressive. The duet with Norah Jones “Searching for Love” was warm and crystal clear and to prove you can never have enough guitars in a song “Going Going Gone” featuring Derek Trucks and Susan Tedeschi put you right there in the room.

Moving on to some Jazz, TIDAL recently put up most of Diana Krall’s catalog in MQA format and I sat relaxed through the entire album “The Girl In The Other Room” particularly with the title track and the subtle “Black Crow” these headphones were in fine form with both the detail of these tracks and reproducing the fullness of her voice. Then I moved over to a different era onto Vinyl and the classic John Coltrane album “Soultrane” which I am lucky enough to have the 45rpm cut from Analogue Productions. From the opening snap of “Good Bait” I was sold on comfort and reproduction of the Ella’s.

Keeping to Vinyl I sat through three more entire titles without fatigue. The undisputable voice of a generation (cliché yes, and my thoughts) Chris Cornell’s live stripped back acoustic LP Songbook along with one of my latest purchases and the somewhat louder “Toby Arrives” by the Koch Marshall Trio proved out the genre flexibility here. A short break for a coffee and I relented on a classical title. Not a huge fan of classical music but I do own about seven versions of Vivaldi’s the Four Seasons and my favourite release by Audio Notes did not disappoint with the constant tide of strings.

So the Ella’s handled multiple genres with clarity, precision and presence but they also did it with ease. They are really not that hard to drive and my media player was more than capable of giving them the right amount of push. While the headphone amp is way past an iPod in power and specification I dropped down to my older Pioneer which also handled the load presented by the Ella’s without a challenge. Compared to my reference set of planar magnetics these are perhaps a little restrained and lacking the speed on transients but hardly a criticism of headphones one third the price. They seriously punch above their weight.

What about that amplifier?

The inbuilt amplifier is an interesting addition to Ella headphones. The battery is internal and a three hour charge will apparently give around 10 hours playback. Acting as a simple on / off without volume with a second setting that provides additional equalization somewhat like a bass boost but with less boom in the curve.

With the sources I was using it was not necessary and without volume control it does not seem possible to use without some form of initial amplification for the volume control. I did however try this with the headphone output of my MacBook Pro and smartphone. It definitely provided improvement if those sources were kept at lower volume and the amplifier engaged. Using this setup the amplifier can definitely be a bonus with less powerful sources or ones with lower quality headphone amplifiers. The bass boost does its job and will be helpful with recordings that have not paid good attention to the lower frequencies.

While mentioning the smartphone topic, the Ella comes with an additional cable designed for phone usage with the usual microphone / controls array. Never been a significant fan of this approach, even on my in-ear monitors, but it is definitely an option many will appreciate. If you are using your smartphone as an audio source (please consider, these headphones deserve more) the ability to answer a call without frantic swapping or even being the “cool kid” in the office taking a conference call with nice headphones should not be discounted.

A short addition as this may not be everyone’s cup of tea, but I thought why not give the Ella’s a stretch to see how they could sit in for other headphone tasks I have. Fairly regularly I mix multitrack music through my computer and audio interfaces and while desktop monitor speakers are best there are times when you just need to be quiet. So I strapped into the Ella’s for a 2 hour mixing session of a jazz track I had recorded and it handled them splendidly. Not overcrowding the detail like my reference headphones and far more comfortable.

The other stretch is for musical instrument practice. I live in an apartment in Japan so no big amps (or any amps) for me and I have resigned myself to headphone use playing guitar through a Kemper Profiling amplifier. As with any headphone use it is a little more closed than a guitarist would like (also impacts on the ability to flick your hair and make guitar faces) but the comfort factor and clarity gave it the thumbs up for this application also.

Nowhere to hide on this one, I really enjoyed the Ella’s. They performed exceptionally with any source I could throw at them across multiple genres. The Ella’s are a sensational example of what planar magnetic technology can give you in terms of precision transients, clarity and stereo presentation. Driving the Ella’s is not a problem with almost any media player source and with the added audiophile headphone “boost” you will get even solid performance from a smartphone.

Size and weight are no disruption particularly given the design, multi hour listening is no challenge. If you have to plug headphones this good into a smartphone you can and take your calls.

Overall these could easily become my new travel headphone and still be at home as the main listening pair. If you want to treat your ears to that next level of sound and comfort you have to try out the Ella’s!