We have been using a 144Hz Viewsonic XG2401 and two 75Hz VX2457-mhd monitors for about six months now. We started with all three monitors in a triple monitor configuration, rocking a massive 5760×1080 resolution which turned out to be epic for productivity and perhaps not as awesome for games due to the fisheye effect of the way many games are coded.

The triple screen project was a great experience to check out wide-angle gaming and a perfect way to look at these two monitors side-by-side for a true comparison. Whilst the triple screen concept of 5760×1080 for gaming wasn’t for us in the end, our subsequent isolated testing of these monitors in a more typical single screen scenario was a more realistic test of modern day gaming with ViewSonic.

In single monitor testing we appreciated the value ViewSonic’s VX2457 brings to the market and saw first-hand that ViewSonic’s XG2401 is a legitimate 144Hz contender for our gaming dollar. The extended duration of the testing period to over six months without a single issue across the three units is also a good indication of the build quality and durability of ViewSonic in 2017.

The VX2457 has turned out to be the perfect match for both our In Win 301 M-ATX test system and the AMD FX8350 Test Bench. These systems are running 4GB GTX 960 and R9 380 graphics cards,respectively, with enough grunt to hit the maximum 75Hz in many titles. The R9 380 card in the AMD test system has FreeSync which makes for a better experience than the GTX 960 at lower frame rates. For these lower powered systems, the ViewSonic VX2457 seems like the perfect monitor based on both capability and price at $179. The colour reproduction also looked surprisingly accurate for a TN panel – this wasn’t a one-off either as we had 2 VX2457 monitors to test.

Our only issue is that the stand isn’t as robust as the XG2401. That’s not to say that the stand is unstable and will tip over, just that if you bump the monitor, it can wobble a bit. The stand is also not adjustable in terms of height and pivot but it does tilt. For the price, tilt is what you should be expecting and we were more than happy to raise the VX2457 by about 600mm with a glass monitor stand from Costco (~$25). There are also mounting holes for a 100x100mm VESA bracket on the rear for stands or desk-mounted swing arms. 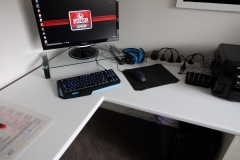 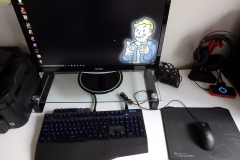 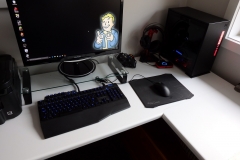 One thing to keep in mind if you plan to use one of these panels with FreeSync is that you will need to also buy a DisplayPort cable. ViewSonic include a HDMI and VGA cable in the box but you will need to buy a DP cable to use FreeSync with an AMD graphics card. The inclusion of a DP cable would likely have driven the price up and unless you’re using an AMD GPU, it’s an unnecessary cost for 1080p. Our In Win 301 test system is using a Gigabyte Windforce 3 GTX 960 graphics card set to adaptive V-Sync with good results. It’s a very attractive option for gamers with a low-mid range graphics card or perhaps something that’s starting to show its age. With good colour reproduction, 75Hz refresh rate and FreeSync at under $180 it’s our value pick at the moment.

Coming in at more than twice the price of the VX2457, the XG2401 is a completely different animal. As the model number suggests, it is from the XG Gaming line with a higher level of build quality, a 144Hz refresh rate instead of 75Hz, and the stand is extremely solid. The panel is still a TN type but like the VX2457, it also has good colour reproduction. The XG2401 was in a new, sealed retail box and we did need to spend about 15 minutes visually calibrating the RGB, brightness and contrast levels. The VX2457 monitors were previously used at PAXAUS 2016 prior to hitting our lab and we suspect that they may have been calibrated for the event because they were bang-on, straight out of the unsealed box. Pre-calibrated or not, all three monitors were capable of better colour reproduction than I was expecting or can recall seeing on other TN panels. 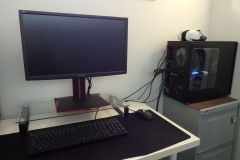 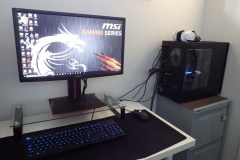 The aesthetic design of the XG2401 is also more appealing with red highlights, a nice matte finish and more intuitive buttons. The stand is worth talking about, it has tilt, height adjustment and pivot for portrait orientation. Whilst I’d never use portrait mode on this screen, it does make connecting cables so much easier than monitors that don’t have this feature. The connectivity options are more modern with 2 HDMI and 1 DP but there is also a 2 port USB 3 hub and 3.5mm audio headphone jack. The USB hub is something that I really appreciate because it limits the cables that go to my PC, making it both neater and easier to switch my desktop setup between a PC and a laptop without needing a KVM device.

For most of our testing, I ran this screen with the ASUS RX470 STRIX card and it delivered a respectable, if at times slightly underpowered (from the GPU) experience. In the less taxing titles where the GPU could hit 120+ FPS, the smoothness over a 60Hz display was noticeable and we are eagerly awaiting Vega to see how 144Hz at 1080p with all the eye candy on might look. I played more First Person Shooter titles on this monitor and liked it more than on our larger 27″ 2650×1440 gaming monitors for a number of reasons.

Firstly, a 24″ display means that my eyes don’t have to move as far to see what’s happening on different parts of the screen – it’s something that might not bother some people but for me it was the first thing I noticed. This was more obvious in games where I need to glance at a mini-map, ammo count or in game chat.

Secondly, the 1920×1080 resolution is much more mid-tier GPU friendly so games like Battlefield 4, BlackOps 2&3, Fallout 4 and Elder Scrolls Online are more playable on modest hardware – or very playable at ultra settings on upper-mid-tier hardware like the previous generation GTX 980 or GTX 970. Finally, the XG2401 is easy to adjust for ergonomics, the on-screen-display is simple to use with intuitively placed buttons along the centre of the bottom bezel and the inputs are readily accessible. Put simply, you can set up the panel out of the box and be gaming almost straight away.

From a pricing perspective, the XG2401 has a street price of $399, equal to the BenQ Zowie XL2411 and the ASUS VG248QE – All 3 of these are 144Hz TN-panel gaming monitors. As far as the viewing angle goes, I don’t have any complaints with the XG2401 but remember that it’s a TN panel so you do need to be sitting in front of it, square on.

The speakers on both of these monitors are also serviceable for ‘monitor’ speakers, great for general home office or study use but are lacking the bass required when watching movies, music or games. This isn’t a problem with the VX2457 or the XG2401, more a limitation of the space available for speakers in an LCD monitor frame. We have seen far inferior speakers built into much more expensive monitors by other manufacturers, this is more a comment about what to expect if you buy either of these ViewSonic products. These 2x2Watt speakers are good enough for casual gaming, some RTS gaming and World of Warships. If I had to describe the speakers in one word, I’d use the term ‘functional.’ For competitive gaming, immersive RPGs or adventure titles and simulations, use quality headphones or buy some dedicated desktop speakers.

So here we are, six months on having used these screens daily in triple screen config, single screen config for gaming, productivity and general use. We’ve moved all of the panels around, from desk to desk and room to room (the handle on the XG2401 stand was much appreciated here) as we shuffled our test kit around and refurbished one of the offices. What did we learn?

I haven’t been able to fault either model from ViewSonic, nor have the other people using them in the office or lab areas. Both the VX2457 and the XG2401 are safe, smart purchases with the VX2457 being the better value for the average gamer and the XG2401 a solid choice for the competitive player.