We tested the NH-L9x65 on the HASWELL-E X99 test bench with the specifications listed below. 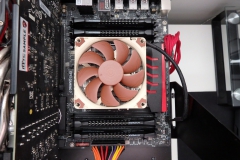 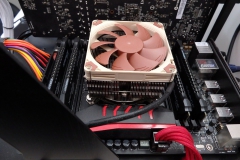 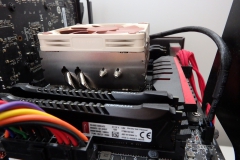 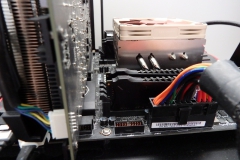 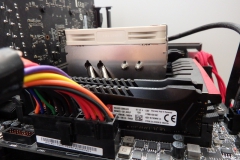 Let’s start with the PWM tests. PWM is where the motherboard uses the 4 wires to control the fan(s) and adjusts the speed as per the software profile to maintain a temperature. The standard ASUS profile will increase the CPU fan speed as it gets warmer to try and maintain a temperature under 75 degrees. This means that the temperatures listed in the graph below don’t mean a great deal as all coolers will have different fan speeds to maintain the maximum temperatures listed. However the graph does show coolers that struggle to keep the CPU cool under extended load (high temperature results) and we do use this test to check how hard the CPU has to work at stock settings and when overclocked.

The chart below shows the CPU load temperature under stock CPU settings in blue and the maximum fan speed of the cooler in red.

This was not a fair comparison and it wasn’t meant to be. The NH-L9x65 performed better than we expected though, able to keep the i7-5630K at a respectable 56.9°C above the ambient 22°C room temperature for a steady actual sustained load temperature of 78.9°C. Keep in mind that this is a torture test and unless you’re encoding video or similar, this type of system load is not representative of real world use. The PWM controller had the fan spinning at a barely audible 25dB(A) according to our decibel meter at 30cm during the peak of the test when the fan hit 2720RPM. Due to the compact size and design, the L9x65 is clearly at an airflow disadvantage to the other coolers so the thinner A9x14 PWM fan has to really work hard to cool the heat sink.

When we run the fans of our coolers at 12v, we get to see what they are really capable of. It’s a less realistic test in the sense that 90% of people won’t ever run their CPU cooler flat out at 12v for day to day use. This test gives an indication as to how well the heat sink or radiator can transfer heat with the bundled fan.

The NF-A9x14 fan is 11mm thinner than the standard NF-A9 fan and also spins a little slower which means that it has a lower airflow potential. The 12V result is basically the same as the PWM run, showing that the first test had the fan running at full tilt. The NF-A9x14 fan has a maximum speed of 2500RPM (+/- 10%) so the 2720RPM is just under the “+10%” and within the specification. As expected, the NH-L9x65 couldn’t cope with the overclock and it was mean/stupid of us to try it. The most surprising thing that we saw out of the synthetic load testing was how quietly the NF-A9x14 fan performed.

The idle temperatures were higher than other coolers due to the smaller surface area and heavier reliance on the fan to keep the L9x65 cool. Measuring idle temps can be finicky due to minor fluctuation among the ‘idle’ processes but we mounted the cooler 3 times with the same result each time so we are certain that the testing was done with a good ‘mount’ of the cooler to the CPU with the SecuFirm 2 bracket.

The NH-L9x65 was able to handle the load temperatures of our i7-5930K in typical use with barely a sound. When the open air test bench was running at stock volts, the cooler was barely audible under general use but it became audible under sustained load when running synthetic tests or playing CPU intensive games. Although we did manage a minor overclock, the overclocking testing using our standard overclock was a bust, though it should be noted that this testing far exceeded the rated TDP of the manufacturer and is by no means considered a fault or negative strike against the cooler. When fitted into a case as per a typical non-overclocked build, this would give an almost silent result from a CPU cooling perspective.

When running this cooler on the MSI X9S Gaming 7 test bench, we typically ran the CPU at stock volts given that this is how we would expect the cooler to be used in the real world. The fan profile was set to silent. Typical use included article writing and intensive games such as The Division, Battlefield 4, Battlefront, Ashes of the Singularity. The hex-core HASWELL-E i7-5930K CPU temperature was regularly in the 70-73°C (delta of 38-41°C) range under extended load, hovering in the high 40s (delta of around 25-28°C) at idle. A more aggressive fan profile would do a better job on the idle.

The above result shows that the L9x65 is an ideal option for non-overclocked Socket 115x systems where access or acoustics are important. Personally, I wouldn’t hesitate to use this in a Steam Machine, HTPC or NAS.

I wished that we could have used this cooler in our Node202 build but it was just a few mm too tall so we went with the smaller NH-L9i instead. Whilst the L9i is still a good cooler, the L9x65 has the larger heat sink and can do the job with less ‘effort’.

We will be keeping an eye out for another opportunity to use the NH-L9x65 in the near future because it really is awesome for its size and so easy to work with.