When it comes to keeping things cool, Thermaltake have a range of products designed to keep your CPU cool, your chassis cool, your notebook cool and even your sweaty hands cool. The Thermaltake Massive SP notebook cooler is something special and more than just another raised platform with a fan in it.

Notebooks generally get warm and gaming notebooks are at the upper end of the scale in that regard too. I remember using 4 erasers to raise my work issued notebook/laptop computer about 15 years ago because it got really hot underneath and when it did, it got noisy too. Although portable computer design has come a long way since then, all 3 of the notebooks that I’ve used over the past few years still got pretty warm under load. Most notebooks will draw cool air in through the keyboard, speaker grills or other vents on the top and push it out the bottom of the chassis. If you only have a few millimetres of clearance between the bottom of your notebook and the table beneath, the air doesn’t have much space to escape and the surface beneath your notebook will heat up as a result. The warmer the chassis becomes, the harder the fan has to work to keep it cool and the louder it gets. Keeping a notebook cool is important for comfort whilst using it, component longevity due to excessive heat and also the accoustic problem of a high pitched CPU or GPU fan under load. 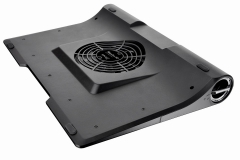 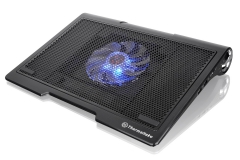 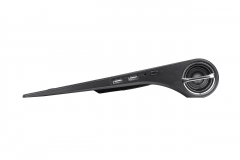 Although the PC peripheral market is not short of notebook coolers, this is one model to include on your list of potentials – once it’s released.

The Technical Specifications are listed below

If we look at the features, the first thing that stood out were the 30mm powered speakers and rightly so. These are not in the same league as a quality set of desktop speakers but they are a long way ahead of any speakers that I’ve seen embedded in any notebook or monitor to date. We tested these with music, video and games and in all cases, when we reverted back to laptop speakers it was painful by comparison. The bass isn’t overly powerful in that you don’t get thumping bass with the Massive SP but we weren’t expecting it. What you do get is an audio upgrade to your notebook that makes gaming, movies and background music a better experience. This is great for people who are limited for desk space or power points as the power comes from the notebook’s USB ports. There is no volume control for the Massive SP speakers, they are either “on” or “off” so you need to use your notebook volume control. All in all, i was really surprised and impressed with the speaker solution that Thermaltake implemented here.

The 140mm fan is really quiet, at it’s lowest setting, we couldn’t really hear it and at the highest rpm it was audible but not offensive – we didn’t notice any whine, ticking or buzzing. It also seems effective and pusing air out the base of the unit. One thing we did notice in our testing was that the CPU temperature of both test notebooks was between 4 and 5 degrees cooler than just having them sitting on the desk – regardless of the fan speed. Our test notebooks were a recent model Dell Latitude E6420 and an older Dell Studio 15. We tested them with Prime95 and in general use. The airflow of the Massive SP is effective, whilst the notebooks under load may have had their CPU temperatures reduced by 4-5 degrees, the temperature of the surface underneath went from “hot to touch” after 30 minutes of Prime95 to mildly warm. The 140mm fan can either be switched off or it can be adjusted to run between 800 and 1300 rpm.

Our test notebooks were both 15″ units so there is likely to be a little bit of overhang on a 17″. There are rubber strips on the Massive SP that grip the underside of the notebook so that it won’t slide down the gradient which is a nicer alternative to a hard plastic lip at the bottom that will usually compromise ergonomics. There are also rubber feet underneath the Massive SP to give it great resistance on the desktop – it won’t move by accident when it has a notebook sitting on top of it.

Aside from the mesh, the rest of the unit is plastic in construction and it does seem to cheapen the feel of the Massive SP to a minor extent. That said, it’s light and it doesn’t feel fragile or brittle. The rotating chrome like plastic switches for speaker on/off (right side) and fan control (left side) felt solid when we used them and add a nice contrast.

The typing angle was comfortable for me which is a good thing because it is not adjustable – even though I found the angle to be spot on, other people might not. If you use an external keyboard and mouse with your notebook, the lack of adjustment is unlikely to be a problem. There are blue LEDs in the 140mm fan and with a notebook on top, you generally don’t notice the glow unless you are sitting in a dark room.

There is a challenge when taking power and audio from a notebook into either a docking station or a notebook cooler like this and that is cables. The Massive SP is powered by the USB ports on your notebook but there are USB connections on the dock so can kind of use it as a docking station to a certain extent. The 3.5mm line in/out for audio also adds to the cables to be managed. This isn’t a flaw of the Massive SP as is a design challenge of any product in this category – the saving grace with the Massive SP is that the cables can be tucked underneath without seeming to impact on its performance.

The RRP on the Massive SP is expected to be around $40 but so far we have not seen any available for retail sale in Australia.

Personally, I really like this notebook cooler and wouldn’t hesitate to recommend the Thermaltake Massive SP to anyone looking for something in the is space. It’s a good all rounder that gives thermal improvement and a nice “general use” speaker upgrade for notebook speakers – I’d consider the Massive SP one of those products safe from “buyer’s remorse”. If only it was on the shelves in Australia to buy at the moment.