Those nightmarish Necromorphs are at it again in the latest in Dead Space franchise: Dead Space 3. We rejoin space-engineer Issac Clarke as he relives the nightmare of the first two face-biting episodes but this time on an icy world of Tau Volantis, in search of the “Marker Team” who went looking for a way to finally rid the universe of the Nercromorph nightmare. We take Dead Space 3 for a spin around the block to see if it lives up to the brilliance of the first two.

Released on 7th february 2013 in Australia; and has been classified MA 15+ by the Australian classification board for Strong horror violence, blood and gore; Gaming experience may change online.

One of the qualities (and there are many) of Dead Space series is the deep plot and the gradual build up of the character base: Dead Space 3 doesn’t disappoint which adds to the established story line and fills in many of the blanks left unanswered from its predecessors.

Dead Space 3 is set in the year 2514 and follows the story of Isaac Clarke and Ellie Langford. Isaac narrowly escaped the Ishimura in the Aegis VII system and again, with the help of Ellie, from the Sprawl – a large mining colony situated on the remains of Saturn’s moon: Titan. After defeating the necros for a second time, Isaac and Ellie fled and hid from EarthGov on the New Horizon’s Lunar Colony located on the Earth’s Moon. The two parted ways as Ellie left to stop the remaining Markers and Isaac’s consuming paranoia after the events of DS1 and DS2.

The basic plot is that a radical Unitologist group known as the “Inner Circle” started to destroy Marker Test Labs on all major colonies releasing the Necromorph infection. One such Marker Test Lab is on the Lunar Colony and Isaac flees the moon onboard the USM Eudora – manned by Captain Robert Noron and Segeant John who were sent to find Isaac by Ellie who has gone missing.

Together, Isaac and the team go in search to rid the universe from the origin of the Necromorph infection on Tau Volantis. 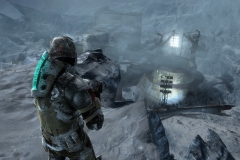 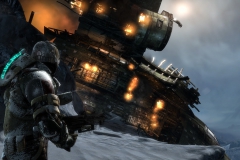 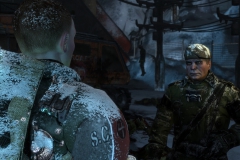 Isaac joins the crew to find Ellie, head to Tau Volantis (Ellies’ last point on contact) and to finally, destroy the source of the Necromorph infection.

If you’re familiar with the previous two Dead Space games, you’ll be right at home with the projected third-person view.

Effective keyboard and mouse mappings are critical in Dead Space. Being surrounded by Necros can be a heart pumping experience and quick access to vital controls to escape is key (pun intended). Throughout the You’ll notice controls are not over the top and are, fortunately, limited to only what’s necessary; this minimalist approach is both effective and rewards players with accurate and full control over the character. Unlike some games FPS games which have excessive controls, Dead Space cannot afford to have the player fiddling about with 40,000 different key mappings.

Controlling Isaac is fluid and he’s easy to manoeuvre around. Dead Space games are somewhat “on-rails” where you’re forced down certain paths – even in a large room; there’s no jumping over boxes or tables and your forced around set maze-like paths around objects – if only you could jump! But in some ways, the fact its on-rails is half the fun because if you’re ankle-deep in hell, you can only do so much to defend against it and there would be little places to run anyway.

Having played first-person shooters extensively, I’ve got largley limited time in on third-person game play (except for DS1 and DS2) I was pleasantly surprised how Isaac’s presence in front of my screen wasn’t a distraction or got in the way of controls – rather, having Isaac directly in front of me I felt I was right there with him (even though I was controlling him) in battling the necros and scrounging for my life. “Seeing” him being attacked had more of an impact on the game than playing in first-person.

Dead Space 1 and 2 saw Isaac on his own for a large portion of both the games, isolated, and desperately looking for a way out of the nightmare. Sure you might encounter some friendly NPCs along the way but they were either cowering scared under a box or being locked down screen doors. Dead Space 3 has a lot of interaction, as part of the story, with friendly marines on a similar goal. Whilst they don’t fight along side with Isaac, the constant physical presence in certain waypoints lowers the sense of isolation and claustrophobia – which I might say after playing DS1 & 2 is quite welcomed and in a way, comforting that “you’re not alone and there is someone close by.”

What’s interesting about DS3, Visceral have altered items and morphed upgrade paths with the current situation – DS1 and 2 where on specifically designed mining ships and urban “sprawl” locations where upgrades to weapons and suits where more “location” based specific. DS3 is a little different, as is the situation – upgrades and ammunition is scarce and the places were Isaac visits are generally experienced heavily damaged due to necro encounters – therefore scavenging for parts becomes primary to enhancing weapons and ammunition as opposed to simply buying linear upgrades.

Isaac wore a purpose-built engineering suit in DS1 and DS2 – because he effectively became a civilian in hiding in DS3 he isn’t walking around the streets in one, rather a leather jacket and a crappy curry-stained t-shirt so he had to put on whatever was available during the struggle. Suit upgrades have been changed in the same way weapons are. Scavenge blue-prints and parts to upgrade your suit. The better upgrades, the more rarer parts you need to find. Players can get creative with various combinations of upgraded – each weapon will vary on how many upgrades and what types of upgrades can be applied but in general there are many many ways to skin a cat (or a necro head.) 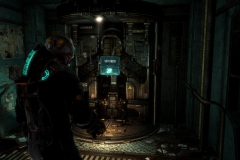 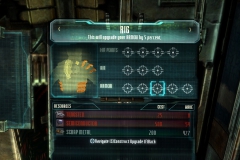 Unlike early DS1 & DS2 engineering suits where storage space was small; the EAV suit has a generous amount of storage in the beginning – presumably to store scavenged parts. However if crafting is your thing, and eventually ammo becomes very scarce, you’ll need to craft some more. Fortunately Benches are easy to come by so crafting new and much needed items can be achieved. Its like purchasing items from DS1 & DS2 but instead of credits you use your scavenged parts, as mentioned previously, so be sure to accumulate as much as possible.

Personally, I like the changes made to the suits and weapons, normally I’m weary of changes to the formula but I think Visceral had done it for the good of the story, and it works in my opinion.

In typical Dead Space style – there are some nasty monsters and necros – but nothing that is not easily taken care of. As you progress deeper into the DS3 universe, you’ll find your weapons stay fairly static and I tended to upgrade the same two units early on. Monsters do get a little harder as you progress and I found the stock weapons just couldn’t cut it.

A new feature of Dead Space 3 is the co-operative play dubbed the “drop in/out” where players can complete the entire story-campaign with a friend. The difference is that one player will experience Isaac’s paranoia and dementia and the other will experience John Carver’s point of view.

Whilst working together, players are also pitted in separate situations . We didn’t get the opportunity to play any co-operative however the idea is novel and original. I’m sure players of Doom3 would like similar support!

I’ve always thought that Dead Space games have been detailed beautifully. There is so much to look at in terms of fore and background detail. If you’re working through DS3 presently, take the time to stop and look out the window of say, the Terra Nova Bridge, and you’ll see a graveyard of debris together with the depth of field is immersive. The subtle changes from the two previous episodes are not distracting and enhance the situational game play and I’ve already mentioned:

The biggest shift that separates Dead Space 3 to its predecessors is the overall sense of horror. Whilst Isaac is alone – or potentially in co-op with a friend, the level of horror, isolation and paranoia is somewhat diminished. Not a bad thing, but my heart isn’t racing and I can play for longer versus DS1 and DS2 whose ambience was exactly what you expected from the franchise. You can let your guard down more so with Dead Space 3 – does that make it an easier game to play? Not really; do I want to play more because I’m not so shit-scared all the time? Probably. I am waiting for the “oh-crap” scenario where I want to run and hide – still waiting.

There’s more audio and text notes to listen to and plenty of scraps. There are some nice locations to visit in the junkyard of ships. This added sense of RPG and distraction from being on-rails is exactly that: a distraction. The game is still largely on rails – definitely not a criticism as it works for the franchise. 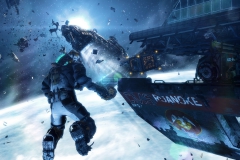 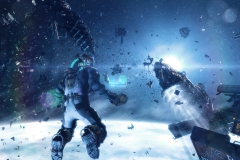 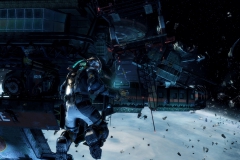 I do immerse myself in the story and I try to relate to the characters as much as possible so I get the intended effect by the storytelling. I think Dead Space 3 delivers in terms of visuals, auditory effects, the story continues the in-depth saga and reveals of lot of back-story.

If you’re into survival horror science-fiction then this is one for you. Do you need to play the other two to get the gist – I’d say no as the opening credits tell you the back story and throughout the game you’re not left wondering what the hell is going on due to NPC interaction, audio and text logs.

Graphics and audio are fantastic and the Godfather game-engine is fantastic, even on older hardware. There are some nice additional features that differ from the original 2 and add spice, not fat to the franchise. Does it live up? You betcha it does. 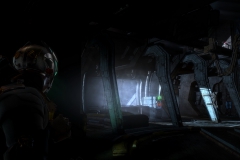 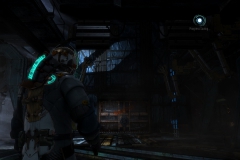 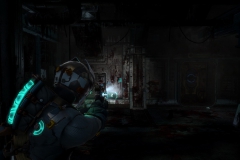 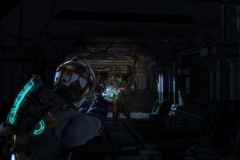 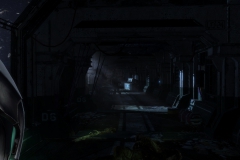 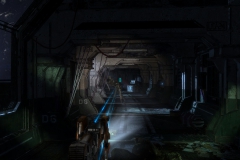