The first round of testing was undertaken on an open Cooler Master CM-690II Advanced case with all other case fans disabled so the only noise coming from the test rig was the CPU cooler on the tower 120mm heatsink. the Corsair AX-850 power supply has a fan but the system didn’t draw sufficient load to make it spin up often and when it did, the rpm were so low it was virtually silent.

We made some subjective notes about the noise levels. Unfortunately we don’t have a decibel reader other than an iPhone app that was pretty inconsistent so you will have to settle for a rating from ‘silent’ through ‘audible’ and ‘noticeable’, then ‘loud’.

The heatsink test bench is not exactly cutting edge gear, its a warm CPU and we didn’t have any TRU120 mounting brackets for the 1155 chipset.

We tested 3 different fans under the following configurations. 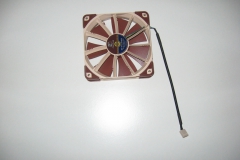 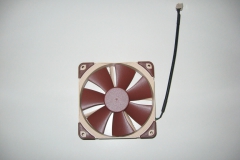 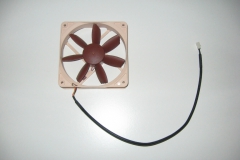 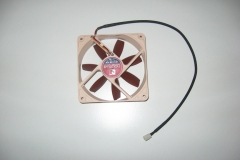 This fan has been used in a number of rigs here as both a case fan and paired with the TRU120 in the past. As an older sibling to the NF-F12, we thought it would be an interesting comparison. 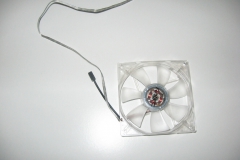 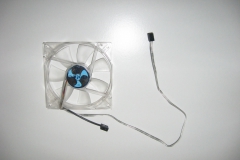 The fan speed is controlled by a 3 way switch that you have to manually change from L,M and H.

Naked Thermalright Ultra
We also tested the Thermalright Ultra 120 without a fan. At idle, we stopped the test because the temperature had risen to 57 degrees after about 30 mins. It seemed both stupid and pointless to then run Prime95 without any air movement so we didn’t push it.

When determining the CPU/Core temperature to reference, we recorded readings for all of the 4 cores but took an average for comparison.

The idle temperatures are the readings just before we started the Prime95 torture test. An average maximum temperature is attained after 30 mins of the Prime 95 torture test. Temperatures were recorded using Core Temp, the system was left idle for at least 30 minutes between test cycles. The CPU voltage and speeds were checked before during and after each test using CPU-Z.

We went with a moderate overclock of 3.4 GHz @ 1.34 volts which is about average for gamers running a Q9550 these days. The stock clocks are 2.83 (333MHz), we simply increased the FSB to 400 MHz, set the voltage to 1.34 in BIOS and disabled all of the power save functions to keep things constant.

These results show the differences in the delta (core temperature – ambient room temperature) for the tests we conducted.