It seems a bit odd to be reviewing a mouse pad but I’m currently using the best mouse control surface that I’ve ever had. Previously, I’ve used: cloth, rubber, a 3M flexible plastic mat and some metal pad thing. The metal pad was a good size and had a nice surface on one side but kept slipping all over the place because it was too light and the rubber spacers underneath it were both too small and kept coming off. That last mouse pad ended up as a Frisbee and, disillusioned, I went back to a laminate desktop. Mouse pads? Pfft, more trouble that they are worth.

Things were great, I was doing fine without my mouse pad, no running off the edge, no pad slipping and cramping my “L337 skillz”. One day I had this brilliant idea to cover my entire desktop in 3mm acrylic Perspex. Yup, it looked awesome and I got some special LCD brackets to mount my screens off of my desk to reduce the clutter. What does this have to do with mouse pads? Try using a Logitech G5 or any recent gaming mouse on Perspex, glass or any other reflective/translucent surface – in short, it doesn’t work. So I went crawling back to the concept of a mouse pad again with my tail between my legs.

Being a tight arse, I grabbed a Fellows mouse pad from Office Works for $9.95 with a picture of an ocean wave on it. Although the picture was calming, the experience wasn’t so much. I instantly remembered why I preferred a ‘naked’ desktop. So I figured that perhaps I should go ‘upmarket ‘ a little.

Enter the ROCCAT Alumic Double Sided Hardpad. I rationalised that spending $45 on a mouse pad was fair enough if I gamed on it most days and it was sturdy enough to last a couple of years.

I wanted something that:

After a bit of looking around, I settled on the ROCCAT ALUMIC and ordered it from PCCG for $45.

Non-slip Rubber corners/feet. These things are not coming off in a hurry (if ever) and they hold the surface where I want it. If the pad is going to move, then I need to actually move it. This thing can’t just be brushed aside.

Dual sides. ROCCAT call these “Speed + Control Surfaces” and that’s pretty much what they are. The black side is for control and the bluish side is for speed. You optimise the DPI settings of a mouse to suit your style but this pad also brings something to the table here. Personally I use the black side and although there is some very minor evidence of use on the surface, after 12 months of punishment, it still looks fine and works a treat.

The mouse pad is constructed out of an anodised aluminium core with the control surfaces bonded on each side. They show no signs of lifting and the rubber corners cover the textured material so you won’t see the control surfaces lifting in the corners. Good design for durability and great attention to detail. 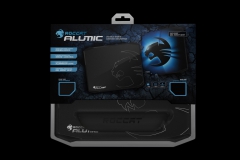 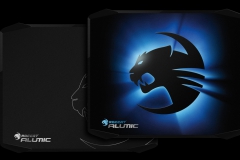 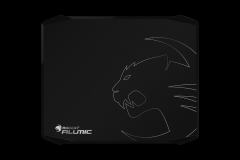 Comes with a gel wrist rest which has a non stick backing. Personally I don’t like ergonomic wrist rests but it was good to have the option of either using it or not. I won’t be blaming ROCCAT for my carpal tunnels in 20 years’ time anyway.

There is no ‘extrovert’ artwork to be seen here, just the ROCCAT logo that is understated on the control side (black) and more obvious on the speed side (blue). It looks mean but is unlikely to clash with most people’s personal tastes.

Heavy duty construction means it doesn’t flex, bend or slide when you are using it or moving it. It is easily the most sturdy mouse pad I’ve seen.

It’s big enough to orient in either portrait or landscape if you have to but small enough not to completely dominate your desk. The actual dimensions are 331mm x 272mm, so it isn’t small but it’s also not the biggest on the market. I feel that it’s a good compromise.

At $45 it’s still more expensive that most of the other options but if you look at what it has to offer, and if you are a keen gamer, this is certainly worth serious consideration. My Battlefield 3 “KDR” might not be as good as I’d like but I can’t blame on the mouse pad if anything, I’d be worse off without it. This is one of those things that I can see myself using for the long term, like my G5. My G5 mouse is almost 5 years old now and if I get that long out of the ROCCAT ALUMIC, it was money well spent. Like I said earlier, after 12 months of almost daily gaming and minimal superficial signs of use, this thing looks like it’s up to the challenge.

If you are in the market for a new mouse pad and the dimensions of the ALUMIC work for you, then you are unlikely to be disappointed with it. If you’re gaming on a PC, then you probably use your mouse more than your keyboard so don’t cheap out – leave the no-name, <$10 pads for the chumps.

To coin an old phrase: The only thing that threatens this product is that someone might come along and build a better mouse pad.