Penny Arcade Expo (PAX) Australia 2016 made us feel like kids in a lolly shop – with so much to see and do, it’s hard to know where to start in our coverage so this article is the overview of the event. We will cover the tech awesomeness and the emerging games of greatness in other articles to follow shortly.

This was our third PAX event and like the previous expos, there was so much going on that we had to really plan out how we were going to see it all. Event management staff were easy to spot in their yellow ‘Enforcer’ t-shirts.

The vendor representation in the main hall felt more compressed than last year with many vendors collaborating and sharing booths – albeit large booths. Some companies still went “all out” and we saw some impressive stands from the likes of MSI, ASUS ROG, Alienware, Logitech, HyperX, XBOX / Omen by HP, Origin PC, Ubisoft, Nintendo and PlayStation. 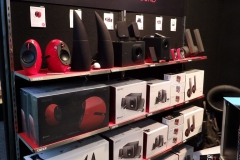 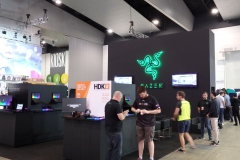 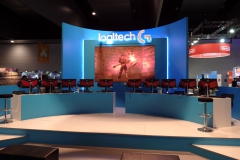 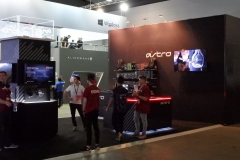 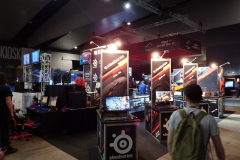 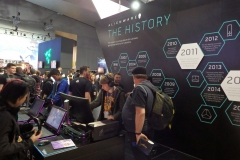 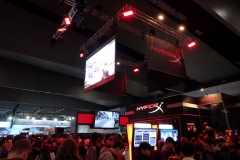 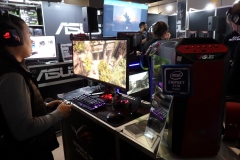 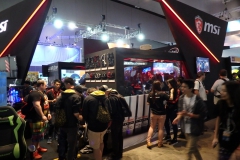 We will cover the tech booths in more detail with a hardware wrap up shortly but there was some exciting kit on display and these companies are all competing really heavily for your peripheral dollars.

All up, my personal top 5 highlights of the event were:

Entry to PAX was via Door 1 in the Melbourne Exhibition Building – this looked like something between a cattle yard and a mosh-pit. It was all smiles and bouncing beach balls as people eagerly awaited access to the Main Hall. Although I didn’t see any of the beach balls make it through the holes in the Skyrim banners, the crown let our several ‘ooooohhhhh’ calls when it got seriously close. The atmosphere was full of energy and fun with a wide demographic cross-section of eager attendees.

One of the earliest booths we saw was the Australian Classification stand – aka the Fun Police, but they do exist for a reason and this probably was an appropriate event for them to attend. As it happens, we saw more people stopping by to have a chat here than we expected so thumbs up guys!

But it’s not all about the big guys, we spent a lot of time looking at the PAX Rising area with so many Indie developers that one day just wasn’t enough to do them all justice – in fact it took 2 days. In talking to the developers about their creations we heard of both the joy of creating something awesome but also the challenges that they had to overcome along the way. We expected funding to be the biggest issue but that wasn’t what most of the developers we spoke to offered up first, with technical issues, project management, scope creep, and even dodgy opportunists trying to exploit their work before it was even launched. It’s a jungle out there but thankfully, the showcase was strong and people seemed to loiter around the PAX Rising section taking it all in and appreciating the countless hours of effort poured into the Indie titles that Melbourne was lucky to see.

A newly Greenlit title on Steam, “Forts” by Earthworks Games, took our attention and could be one of the most fun indie titles we’ve seen in a long time. If you’ve never heard of it, we will cover it in the PAX 2016 Gaming wrap up but you can also go here to check out the steam page. As far as we’re concerned, EarthWorks have a winner on their hands.

We also discovered the action RPG Lost Castle that has randomly generated maps, cute hand drawn artwork and levels, over 100 weapons, hard bosses and the option of 2 player co-op mode.

Arena brawler “Dismantle” by Greathelm is another title that could use some love on greenlight so click here to check it out and give it the thumbs up if you like it.

Having a legit drone pilot on hand proved worthwhile when we came across Drone Legion by Dark Shadow Studios. This was a VR drone simulator that was described simply as “F***ing awesome” by James immediately after he had his 10 minutes on it at the booth. This one is still emerging but the signs are good and it’s one to watch.

Eyes of Ara is a breathtakingly beautiful puzzle adventure – keep an eye out for this one as well. Not sold on the gameplay yet but it sure was pretty.

There was no shortage of mainstream titles available and with COD : Infinite Warfare being released, it was getting a lot of exposure from the Saturday. Battlefield 1 was prominently on display across the event but it was hard to miss Origin PC’s stand with the new Free to Play Elder Scrolls : Legends being played on their big screen.

Consoles featured with a good variety of games available to the masses – which is much better than having 10 consoles all playing the same title.

CS:GO and rocket league also had good representation at a number of booths and the arena with various comps running over the course of the event.

Dawn of War III seemed to have a constant queue of people keen to get into the action with some players having some casual fun and others taking the opportunity to unleash carnage a little more seriously.

Final Fantasy 15,000 (ok, might only be XV but seriously, how long can a franchise keep going?). This one didn’t really interest us but it was popular with the attendees and we rarely saw a vacant console position for the entire event.

Just Dance made a return appearance  with the 2017 edition. Check out YouTube, search for PAX AUS Just Dance to see some of the shenanigans and fun that was had over the course of the event.

If you are interested in a career within the games, animation or film industry, there were a number of booths at PAX with courses and people to help you find out what the next step could be. This was also the case last year and really pairs well with the Indie area to see what’s possible and how to make your start. 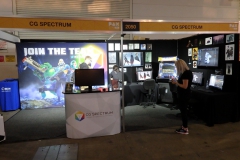 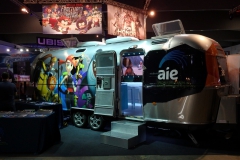 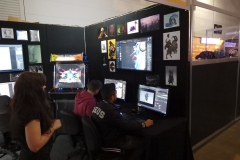 Collectables and other stuff

PAX wouldn’t seem right without the stands selling pop culture items, both custom made but very creative artists and mass produced by machines or cheap labour. Either way, if you like pop culture and have money to spend, there was plenty of opportunity to pick up souvenirs. There were also books, comics and other gaming memorabilia for sale at a number of locations. 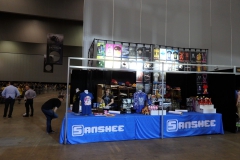 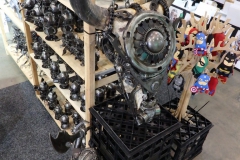 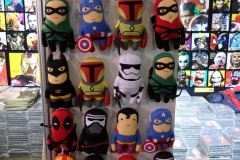 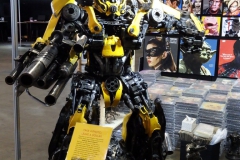 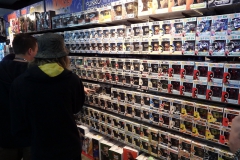 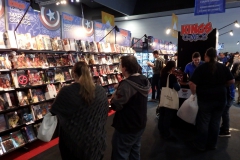 We won’t talk much about the food other than to say that there were plenty of options inside and out of the Exhibition Hall but one place that stood out was the popcorn and candy stand in the Tabletop area. Who cares what it tasted like, the smell was awesome and it just looked like it belonged there.

Tabletop games and miniatures are typically not our thing but this is a major part of PAX. There were tournaments, casual play, stores, cosplayers, fan art and a number of panel discussions to suit newbies or hardcore players. Magic: The Gathering sponsored the 2016 PAX Tabletop area which was probably the most social part of the precinct. Players were able to sit down without the background noise of the Expo Hall and play their games whilst sharing a good laugh or having a casual chat without too much distraction or interruption. Newcomers were welcomed and we saw several examples of people getting impromptu lessons from new friends. 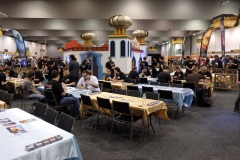 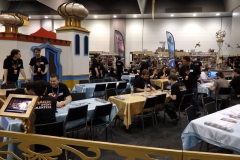 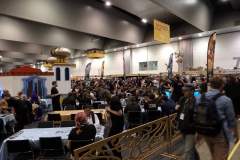 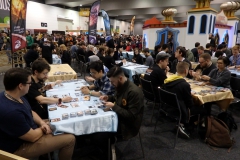 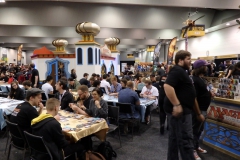 This was a lot of fun to watch as teams raced around inflatable barriers acting out some CS:GO carnage in what was a pretty decent sized arena. We saw one guy camping his ass off and had a good chuckle when he got flanked by the other team and sent on his way. 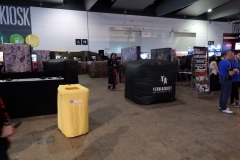 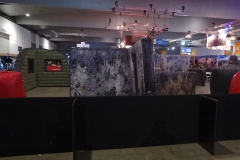 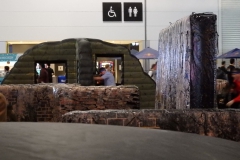 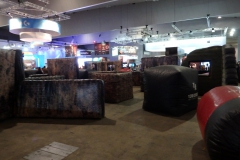 There were 6 theatres running with different sessions all day every day and they were well attended from what we saw. The most memorable session for me was the “PAX Pirata: Creativity, Copyright, Conflict and Collaboration” session with a great panel. Morgan Jaffit and Paul Noonan were the stand out panel members, staying on topic and making some very balanced points. The end of the discussion came too soon and I’d have been happy to see that one go for another hour or so.

There were so many panels running that attendees had to study the schedule and choose carefully. We’d like to give the PAX crew a massive thumbs up for organising such a rich line up of presentations and discussions at this event. Even without the Exhibitor Hall, Free Play area and freebies, theses panels on their own would justify the entry price.

Last but not least there were some awesome Cosplay folk roaming the event and bringing a sense of the exotic to the whole precinct. Whilst some people were clearly casual in their approach there were also some serious/professional Cosplay models in attendance. The presence of pop culture characters mingling among the attendees and posing for photos brought so much life and fun to the event. It isn’t for everyone but you have to respect and appreciate the effort, confidence and the result of those that brought Cosplay to PAX AUS 2016. 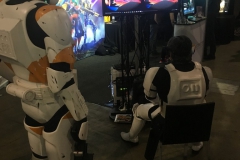 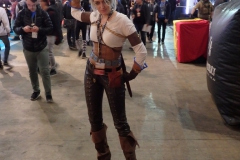 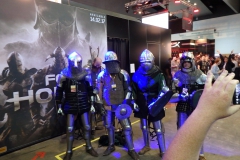 All up, PAX AUS 2016 was a slightly different event to last year with a more diverse presentation of ideas and games. The panel discussions were informative, entertaining and certainly worthwhile. This was a great event and a ‘must-attend’ for anyone considering a future in the Games industry.