As usual, the practical build is the best way to really get to know a case and appreciate the design. For this build, Gigabyte chipped in with their new Z97N Gaming 5 motherboard and we used other kit that we had in the lab. Full specs are below but this build was designed to run just about anything at 1920×1080 and be a good example of a LAN rig.

The test components used are listed below

The first thing we did was look at the order of assembly and the cable routing options. The fact that 5 of the six outer panels come off (including the floor) meant that the power supply could go in whenever and really gave more flexibility to the order that some components could be fitted. There are numerous holes drilled in the frame and I’m not sure if they are specifically designed for zip tie anchor points but there is a lot of places to secure your cables out of the way. 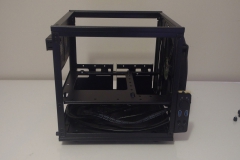 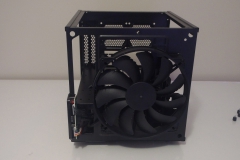 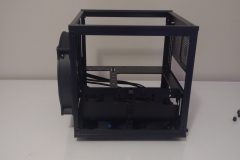 After checking the forums and seeing a few people wondering about the CPU cooler height restriction, I wanted to show what a 120mm tower cooler like the Noctua NH-U12S looked like in the Core V1. As you can see below, it doesn’t fit and the tower is about 10mm too tall. Thermaltake are clear about the CPU cooler height restrictions in their marketing information and spec sheets so this isn’t an issue. The only AIO cooler in the lab is a 240mm Corsair H100 so we went with a Noctua NH-L12 low profile cooler for this project. The NH-L12 also allows for an alternate standard sized 120mm fan to be swapped out on the top. There was a Deep Cool red LED 120mm fan in the lab that gave a little bling to the build at the expense of a few dBA – for general running, I’d stick with the noctua NF-F12 and enjoy the silence. 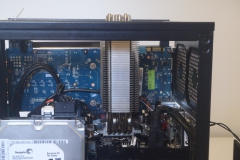 The case design means that the Core V1 can hold a standard length ATX PSU but for any compact build, a modular 140mm model is ideal because it leaves more room for cable management. In the interests of a worst case scenario, I used our massively over powered Fractal Design Newton semi modular power supply. It has 2 PCIE power cables so one of them had to be squared away from the very start. 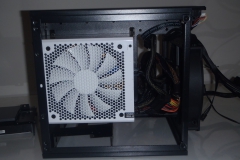 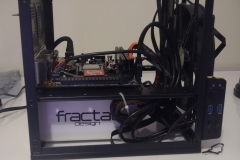 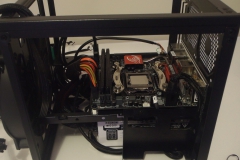 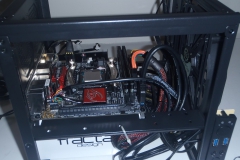 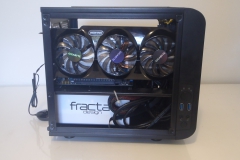 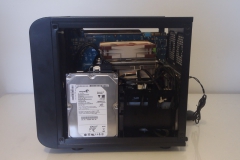 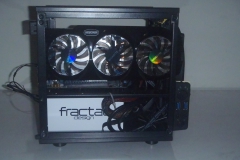 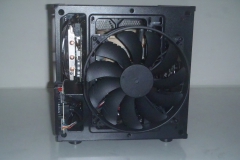 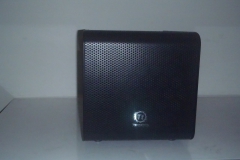 The built in motherboard stand offs are spot on and the larger CPU back plate cutout is also handy for cable routing in that you can pass some thin cables like front IO headers under the board to keep things tidy.

The drive trays are easy to work with and for a LAN rig, you could probably make do with just one tray holding an SSD and a larger drive like our test setup. 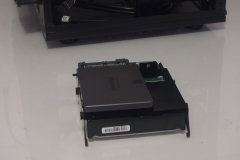 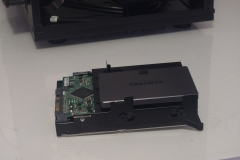 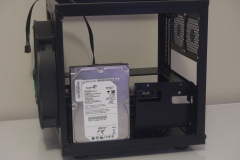 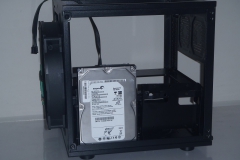 I settled on having the window panel on the top and the two perforated panels on the sides but the flexibility is there to mix it up – this is a great design feature.

As stated earlier, there are mounts for a pair of 80mm fans at the back of the Core V1. The fans are not included and they are probably not necessary for most builds – in my testing, I didn’t see much of a difference.

The Gigabyte Z97N has a red LED pathway around the sound chipset which was visible through the left grill panel (or window if it was fitted there) and the power/HDD activity LEDs on the left side of the case are bright but at least they are not on the front. The location of these lights is important if the Core V1 is going to be used as a HTPC because those lights can be distracting in a dark room while watching a movie.

Clearance and cable management isn’t a problem – to the point where custom coloured extension cables could be considered for a build. Once all the cables are in, squaring them away neatly is just a matter of popping off the bottom (floor) panel to secure them out of sight under the motherboard.

The gallery below shows the finished build with the side window positioned at the top. Although it doesn’t come up well in the first photo, when we temporarily swapped out the top fan on the CPU cooler with a Deep Cool LED fan it lit up the case pretty well with light effectively projected out the side and rear vents onto the walls. 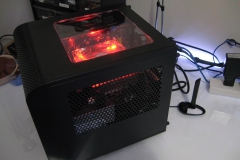 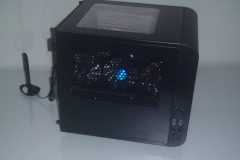 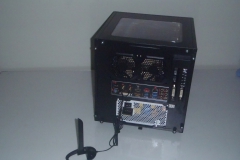 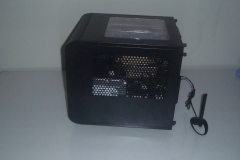 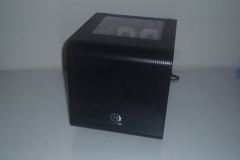 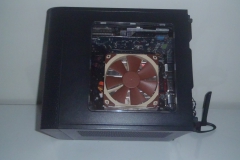