We used the following components in our Node 304 gaming demon.

In retrospect, we could have used a tower CPU cooler instead to make better use of the case’s natural airflow from front to back. In the future, we intend to test two of Noctua’s new tower coolers in the Node 304 so stay tuned. 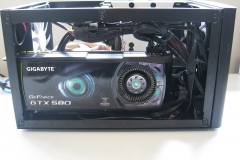 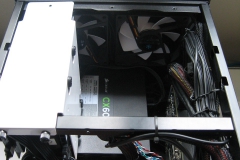 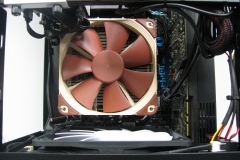 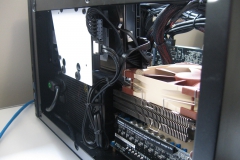 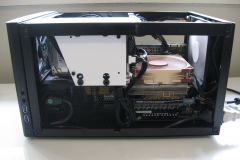 We tested the Node 304 in the following different configurations:

We found that the Reference GTX580 graphics card temperatures were consistently the same in all tests – this is most likely due to the large mesh panel that runs along the graphics card slot on the left hand side, providing filtered fresh air to the graphics card cooler.

The CPU temperatures, on the other hand,  were varied depending on the case configuration which was to be expected. The best temperatures were achieved with the roof and sides off, followed by the case fully assembled with the fans on high. Our “worst” load temperatures were less than 5 degrees higher than having an open case but the Node 304 was practically silent with the fan controller set to low speed. This is a fantastic result as far as we are concerned. The CPU cooler was barely audible, the actual case fans couldn’t be picked out of the ambient noise – if anything, the stock NVIDIA cooler on the GTX580 was the loudest part of the build in the closed configuration with the fans on low.

We did not experience any buzzing, whistling, vibration, or other noise when using this case over the period of almost a month. With the PC sitting on the desk next to me, if there was an any unwanted noise or vibration I would have heard it. The fans were inaudible at low speed, borderline audible at medium speed and noticable at high speed (we assume 12v) via the integrated fan controller. For the difference we noted in temperatures, we’ll take the low fan speed with a 5 degree temperature penalty any day of the week.