The connectivity consists of 3x DisplayPort and 1x HDMI and a single Dual Link DVI port. This should be sufficient for all gamers with the budget for a $1200 graphics card.

The full specifications of the MSI GTX 1080 Gaming X are listed below.

VR isn’t at the top of our list in terms of reasons to buy a graphics card but the requirements according to NVIDIA’s website are similar to running at 3024×1680 resolution and anything less than 90 FPS will impact the experience. When gaming on a flat or slightly curved LCD, frame rate drops are subtle and can be annoying but in a VR headset, I’d expect that to be much more irritating and possibly enough to make a person feel unwell.

The Pascal architecture allows the GPU to render the VR (and other different styles of) resolution in a more native way with less overhead which means better performance.

NVIDIA state that “Ansel is a revolutionary new way to capture in-game shots and view in 360. Compose your screenshots from any position, adjust them with post-process filters, capture HDR images in high-fidelity formats, and share them in 360 degrees using your mobile phone, PC, or VR headset.”

OK, so this is better than a straight screen shot but games need to be compatible to make use of this technology and it’s early days. Mirror’s Edge Catalyst and Witcher 3 work with Ansel but this is a good start and we look forward to more titles taking advantage of this feature. Sometimes it is really hard to get a screenshot that shows the true situation that you are in during a game and a 360 degree view is a great way to showcase awesome skills or an epic fail.

The 1.24 patch for Witcher 3 includes Ansel support and we had a bit of fun playing with the screen shot tool. Being able to float around a scene is amazing, let alone adjust the resolution and effects. It’s like freezing time and moving around to take the perfect photo. Grabbing screen shots has never been so much fun.

GPU Boost 3 uses a voltage offset to push the GPU that little bit further, effectively safely overclocking itself when needed to a pre-determined point. The MSI GTX 1080 Gaming X has the Twin Frozr VI cooling solution to manage the temps of the GPU, memory and power so they have done the hard work in the factory so end users can overclock via the Gaming App without worrying about driver crashes etc.

The first thing I noticed when eagerly unpacking this beast was the weight – it feels every gram of its rated 1100g weight. The back plate gives it a solid and cool (yes, as in thermal ‘cool’) feel as you handle the card. It looks and feels big – although this wasn’t an issue on the test bench, it was more obvious (but still not a problem) when installing the GTX 1080 Gaming X into a case for the practical build. The red plastic on the shroud has an almost metallic finish to it and the textured black plastic on the shroud also looks more futuristic than the design of the GTX 980 Gaming 4G. All of the fins and heat pipes are polished and straight, the back plate has the MSI Gaming dragon textured across it as well. All up, this thing oozes quality.

Just note the physical dimensions of the card if you have an ITX build in mind. 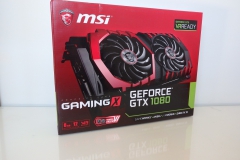 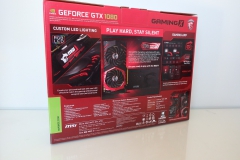 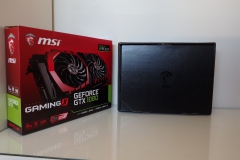 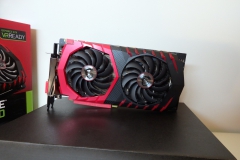 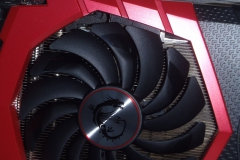 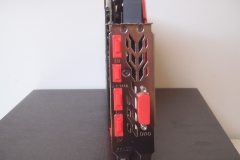 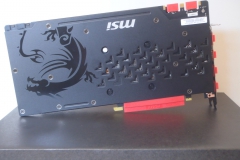 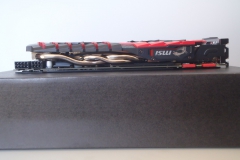 This review sample had been reviewed previously but it still looked new. The package had some signs of shipping but the card inside was well protected in the standard MSI way. All connectors were protected by soft red silicon covers and the card was in an anti-static bag inside the protective foam cut-out.

Find out more or adjust your settings.