On any given day, I will use 3 different workstation setups, each with a different keyboard and mouse. For the most part, I carried the DS300 around with me and used it as much as possible to eliminate the bias of other mice I might use. As a right handed gamer, the DS300 felt comfortable straight away with the moulded ergonomic grip but it was the rubber pads on either side of that moulded shape that got my attention. The black rubber pads are the perfect balance of grip and flex – no matter if you hold your mouse with a white-knuckled death grip or lightly, the grip will stop your fingers from sliding along the outer edges of the DS300.

The laser sensor is capable of 8,200 DPI but I didn’t come anywhere near it when testing the DS300. Anything over 1200 is just too unwieldy for me. I went with some minor tweaks to the default DPI settings in the end. When messing around with the DPI settings, I noticed the first flaw in this otherwise impressive mouse – the physical DPI switch. Most of the gaming mice that I’ve used have two switches, one to increase the DPI and the other to decrease it. The MSI DS300 has a single switch that cycles through the DPI presets as defined in the software which is less than ideal and likely to result in gamers pressing that button more than they probably want to. On a personal level, I don’t switch DPI when gaming so it isn’t an issue for me at all but it’s still worth noting. The switch is re-mappable so if you don’t tweak your DPI in-game, just use it for something else.

Gamers will typically have a preference for a shape when it comes to gaming mice. At one end of the scale some mice have a flatter, claw-like shape, and at the other end of the scale we see longer, slender mice with a high back. The DS300 sits in the middle of both width and height with support for the thumb. The shape is probably a ‘safe’ move for MSI as it’s unlikely to polarise the market.

MSI designers also implemented 3×4.5g weights so that the DS300 can be tweaked. Although I found the default weight set to be spot on for my liking with the weights fitted, if you do find that you need to reduce the mouse weight by up to 13.5g to make you a better gamer, the option is there.

LED lighting is RGB and very even across the gaming dragon logo. The software allows you to set the colour and effect for the RGB LED. The MSI software allows the adjustment of both intensity (low, medium or high) and the effect (steady, slow, middle, fast). No matter if gaming in a well-lit room or a dark gaming cave-like environment, the LED lighting is vibrant and impressive with the dragon logo looking awesome. One thing to keep in mind is that the DS300 has red plastic highlights on the mouse so if your desktop peripheral theme is green, blue, orange etc, the red plastic highlights may clash with the RGB LED.

Having discussed the LED configuration let’s take a closer look at the software package that supports the DS300. MSI did well here, it’s intuitive stable and doesn’t get in the way of gaming or general use. One feature that we really liked is the ability to store up to 4 profiles on the mouse itself – this was appreciated when switching the DS300 between 3 different workstations and a laptop. Whilst there is a macro feature in the software, it isn’t going to be overly popular with most gamers due to the number of buttons on the mouse – if the DS300 had another button or two the macro capability would be even more useful. You can export and import macros and profiles so there is a way to at least back them up if you do embark on heavy tweaks. The profiles can be linked to programs as well which is handy if you play across genres. 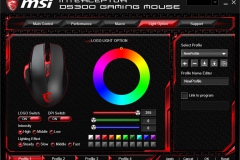 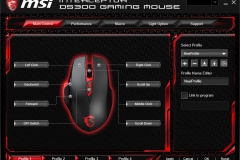 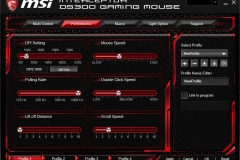 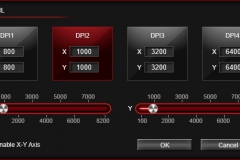 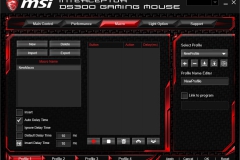 DPI tweaking is what you would expect from a mature gaming mouse, you can adjust both the X and Y axis independently if needed and the polling rate is also adjustable between 125Hz and 1000Hz. There are 4 DPI presets to be configured which is a double edged sword because you can’t actually disable any of them. So for gamers who only use 2 DPI presets, the single DPI cycle button will likely be a frustration. MSI could resolve this by allowing profiles to be disabled in the software for the current product and perhaps consider the future implementation of 2 DPI adjustment buttons (increase/decrease) instead of one to cycle through the presets.

The Primary test system specification is listed below but the DS300 was used on multiple workstations/laptops. 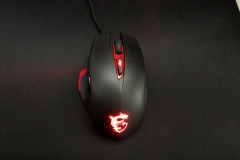 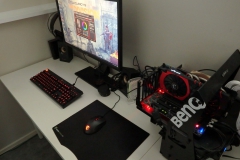 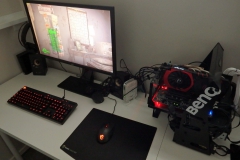 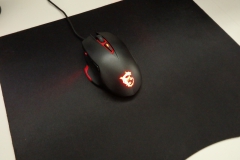 Obviously the MSI DS300 looked right at home next to the MSI X99A Gaming 7 test bench with the MSI GTX 980 Gaming 4G graphics card. This has been our standard gaming test bench for the past year so it was pure co-incidence for this review that we were MSI-heavy.

I didn’t have any issues or concerns with the switches on the DS300 and they actuated exactly when I wanted them to. After the obligatory 1 day of adjusting to the different shape from the Razer DeathAdder Chroma, the MSI Interceptor DS300 felt natural, responsive and most importantly, comfortable after extended use. The DS300 was tested with FPS, RTS, action games and RPG titles – passing all with flying colours. It really is a great all-rounder. In World of Warships, the scroll wheel held up to the longer scrolls of zooming in and out. The ‘notch-scrolling’ in shooters like The Division, Battlefield 4 or BlackOps 3 when changing weapons was precise and problem free. Strategy games like XCOM, CIV V and StarCraft II also felt smooth and natural much the same as general desktop use. Scrolling around RTS maps was precise and deliberate. There were no occasions where I felt that the mouse was holding me back, missing clicks or in any way negatively impacting on my gaming experience.

The Mouserate utility showed us the 1000Hz polling rate as advertised so we can confirm that the DS300 is indeed able to hit the 1ms response time target.

The build quality of the DS300 is as solid as the other products I’ve seen from MSI. The braided cable and USB plug feel high end and the gold plating is a nice touch on the USB connector. All of the buttons also feel like they will go the distance, perhaps a little heavier than a typical mouse but not so much that it interfered with gaming – if anything, there were fewer miss-clicks. After a month of solid use, there were no visible signs of use or weaknesses and the DS300 still had that ‘new’ look about it. I used the mouse on a Mionix Sargas 400 and Sargas 900 cloth mouse mats which limit the wear and tear under the mouse – this is what we normally use in the office so it wasn’t a case of any special treatment.