Red and black is the PC Gaming standard for performance products and the Z170I Gaming PRO AC is no exception. There is red LED lighting in the audio isolation PCB channel and red markings on the black PCB. The heat sinks are also red and black with a premium finish. The WIFI card has a green PCB that we suspect wasn’t worth customising in any of MSI’s cost benefit analysis discussions. The tiny green PCB doesn’t take away from the greater aesthetic and the Z170I Gaming PRO AC looks very clean and tidy. There is also a Gamin LAN LED. Whilst there isn’t a debug readout on the board itself, there are 3 lights to help you out if your new build doesn’t start up, one for CPU, one for RAM and one for Graphics/VGA – this is a simple but effective way to help troubleshooting and something I prefer over decoding speaker beeps.

MSI highlight the fact that they have implemented LAN Protect on the Z170I Gaming PRO AC – a feature that protects the board against a surge of up to 15KV via the RJ45 port which lights up red to show that it’s on. This is a ‘nice to have’ and although I’ve never had a board cooked by a surge via RJ45 I have spoken to people who unfortunately have. The upshot is that I’d rather have the protection if it’s available.

Intel WIFI and Bluetooth capabilities are included to give up to 25Mbps for Bluetooth data transfers and 867Mbps for 802.11 AC transfers. Intel Wireless DisPlay (WiDi) is also available if you have something that it can share with. There are two antennas at the back that both seem quite effective.

Gaming experience via AC WIFI was flawless through 3 internal stud walls. I’d happily use the AC WIFI if a LAN cable wasn’t available. Streaming movies at 1080p was also fine without any issues noted. Try as I might, I couldn’t detect any differences in lag when switching between AC WIFI and a wired connection. Online gaming was tested across multiple titles such as ESO, CounterStrike: GO, Battlefield 4, COD BlackOps 2. Steam and Origin downloads were quick enough over AC WIFI.  Although the testing methodology isn’t extensive, the result was a good indication that the solution works as advertised.

Gaming LAN Manager is easy to use and seemed to work as expected when playing games and using a torrent downloader. Despite the software prioritisation appearing to work, I’d always recommend shutting down torrents and other network activity when playing online games. Where the LAN Manager really becomes useful is when you need to run other programs that access your bandwidth – things that you might need to run while gaming online are Skype/VOIP applications for team communication or some kind of streaming application for those that broadcast. This is where a little traffic prioritisation can go a long way. 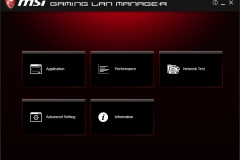 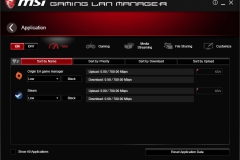 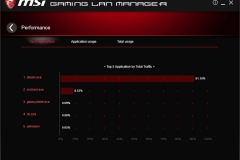 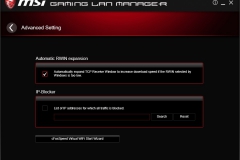 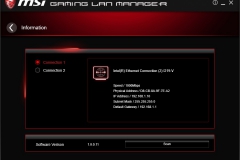 The Z170I Gaming PRO AC has AudioBoost 3 based on the ALC1150 audio chipset. This provides 7.1 channel audio with optical connection for home theatres / amplifiers. I’ve been really impressed with the ALC1150 for on-board sound every time I’ve come across it. The manufacturers take measures to isolate, shield, boost and improve their audio solutions and MSI is no exception. You can see the Isolated PCB with the red LED trace in the board and the audio capacitors.

The MSI Command Centre is a one stop shop for overclocking, monitoring, fan control and RAMDISK. It even has its own remote server control options via an App Store or Android app for your Smartphone. It’s not new to this motherboard and something that I’ve been using for a while with MSI Gaming Series motherboards. Updates are released regularly and I haven’t had any issues with the software to date.

When undertaking a fresh installation on the Z170I Gaming PRO AC, I loaded all of the software from the driver CDs and then let Live update do its thing. I didn’t have any issues and after a few restarts, everything was up to date and the test setup was ready to go.

I’m raising this because it’s a ‘value-add’ that MSI has included when they really didn’t have to. Basically, it allows you to create macros and assign them to keyboard buttons. Game functions, volume control, even overclocking are possible. This is something that I can’t see myself ever using but it’s worth noting that it’s there if you want it and it might tide some gamers over until they can upgrade to a new gaming keyboard.