Earlier this year, we tested the SX900 256GB SSD from ADATA, now we get hands-on with the XPG SX930 480GB with a new controller and a sexy new label – but is it any faster?

The SSD market is continuing to improve with the price per gigabyte ratio becoming a lot more ‘wallet friendly’, there is some intense competition and no shortage of options. I discussed our desire to build a high end PC in a console-like form factor with ADATA and the limitation of 2×2.5″ drive spaces – as a result, they suggested that we try the new XPG SX930 480GB SSD. This drive comes with a 5 year warranty, a new JMicron controller and I was also pleased to see the new artwork – call me shallow. The XPG SX930 is available in 120, 240 and 480GB capacities and boasts speeds of up to 540MB/s read and 420MB/s write.

The 2.5″ form factor with 7mm thickness is standard for an SSD making them ideal for most notebooks and desktops. ADATA has included a 3.5″mounting bracket and 2.5mm spacer for maximum compatibility in PC builds. The mounting kit isn’t something most people will need but the points go to ADATA for selling a complete solution rather than just the SSD itself. The potential downside here is that despite being helpful, the included accessories and software may not have the same “value add” for some consumers which could make the SX930 offering slightly less competitive. 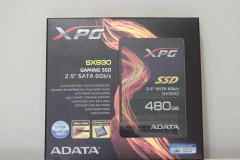 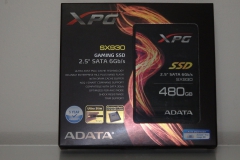 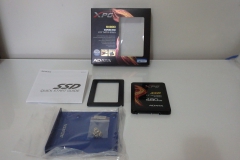 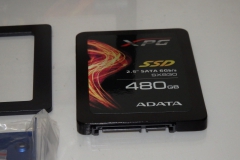 Previously, ADATA implemented the SandForce 2281 controller and MLC NAND on the SX900 series SSDs but this time they have changed things up a bit and gone with the JMicron JMF670H controller. The JMF670H has more bells and whistles like the ability to support one module of DDR3 and improved ECC (error correction). ADATA also implemented Synchronous MLC Plus NAND in the SX930 – this is basically higher grade MLC NAND that should fortify longevity.

The ADATA SSD Toolbox software and Acronis utility for data migration are functional and easy to use. As an exercise, I migrated from another SSD to the SX930 after our testing to see how the process went and it was very straight forward. I didn’t have any issues booting from the SX930 in the test system – the whole process was seamless as advertised.

Obviously I can’t test longevity/durability but it is promising to see that ADATA did take measures to improve the durability with enterprise grade NAND and they have made it easy to download the free tools to check the health of the product whilst also extending to a 5 year warranty.

We’ll go through the specifications first, then validate our test unit against them to see how the SSD performs as a system drive.

I ran the review unit through its paces with Anvil Storage Utilities, ATTO, AS SSD, and Crystal Disk Mark to get some metrics for comparison against both the specifications as well as the older and smaller ADATA XPG 9000 256GB SSD.

Here are some graphs of the results for those that prefer a visual representation. Note the difference in access time and the way the SX930 handles non-compressible data with AS-SSD and Crystal DiskMark. 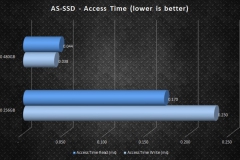 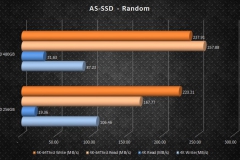 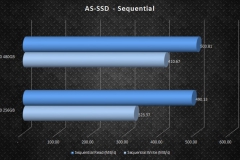 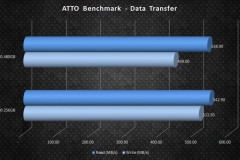 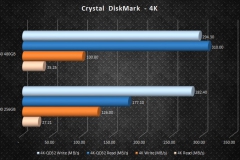 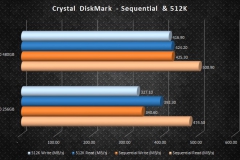 The XPG SX930 performed well compared to the specifications, just falling short of the max ATTO write speed by a mere 3.1MB/s but exceeding in the ATTO write test by 19MB/s. Based on these results and the expectations set by ADATA’s product page, I’m happy to say that the drive performed as advertised and does exactly what is says on the box. 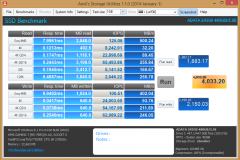 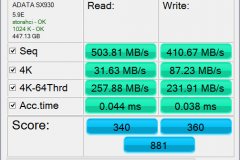 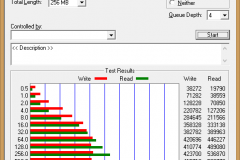 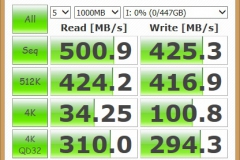 As expected, the incompressible data test results yielded lower transfer speeds than the compressible ATTO data test. For context we can look to the results from our testing of the smaller and older SX900 256GB SSD that we reviewed earlier in the year and it’s clear that aside from the 4K writes, the newer SX930 480GB drive is a better performer when it comes to non-compressible data.  The SX930 480GB has faster read/write speeds and faster access times than the SX900 256GB – so it looks like there are no sacrifices with the additional capacity.

Overall, the ADATA XPG SX930 works as per the manufacturer specification and I didn’t have any hesitation in using it for our Console-style build. Capacity was an important consideration for the small form factor ‘Console’ build because the Fractal Design Node 202 case that we selected only has room for 2 x 2.5″ hard drive/SSDs. Going small almost always requires some kind of trade off but the SX930 meant that we didn’t have to cut any corners when it came to the system drive.

480GB is a luxury size for a system drive and means that there is plenty of space for some AAA titles and even some Blu-ray rips. My personal Steam library is pushing 900GB, not to mention my GOG, Origin and Uplay libraries so clearly 480GB isn’t going to hold everything I own but it’s enough to hold what I’m playing at the moment. In a desktop PC, I’d pair this with at least a 1TB mechanical HDD but the 480GB capacity means that in a small notebook, there should be enough storage capacity and speed for the average enthusiast.

It is a standard size and can be installed in 2.5″ drive mounts or in a 3.5″ bay with the included bracket. ADATA also give you a code for Acronis ATI HD to assist with data migration from another system drive. I used this after testing and it worked as advertised. There are a number of programs available to do this sort of migration but it is nice to see vendors including software utilities and making it easily accessible for system builders.

As expected, we didn’t have any issues working with the drive during the build, the SATA power and data connectors were well placed and solid. The mounting screw holes lined up with our Node 202’s 2.5″ SSD bracket.

The 480GB of space feels like a real treat but for $279, it’s not the unattainable dream it used to be. In our concept build we were able to load our favourites on the SSD and the rest on the 1TB SSHD that we also included in the build. Keep an eye out for the build log over the next week.

The saddest thing about the build was that the SSD is hidden away and the funky new artwork can’t be seen. Boot time, general performance and game load times were all really impressive. We are looking forward to seeing what the gamers think at the next RESPAWN LAN in Melbourne when we showcase the practical build.

The ADATA XPG SX930 480GB model can be found online as low as AUD$279 which seems reasonable. When you look at the Samsung EVO 850 and SanDisk Ultra II with similar advertised speeds, a street price reduction of ~$10 would probably make the SX930 more competitive. The 240GB version can be had for $149 and unlike the previous SX900 series, the SX930 is now available from a larger range of e-tailers in Australia so the accessibility issues we saw with ADATA products appear to be improving.

I didn’t experience any compatibility issues or problems with BIOS or Windows recognising the drive, nor did I experience any performance issues when installing the Operating System or applications. Boot times, general system performance, application loading times and system benchmarks were really snappy with the ADATA XPG SX930 SSD.

At the end of our testing, I couldn’t find anything negative to say about the product and would happily use this in any build.