We tested the NH-U9S and NH-D9L on our ASUS ROG test bench with the specifications listed below. We always re-baseline the fan profile in the FanXpert 2 software and run PWM mode in the ‘standard’ ASUS pre-set. The MSI GTX980 Gaming 4G is 100% silent when not under load because the fans actually stop. We want to ensure that we have as little noise as possible coming from the system so that we can isolate the sound from the CPU cooler itself.

We compared the Noctua 92mm coolers against the larger NH-U12S 120mm tower cooler and massive NH-D15 beast to show the compromise of going small. To be clear, it isn’t a fair comparison but it’s a good point of reference for some perspective. The galleries of our test setup for each cooler are below. 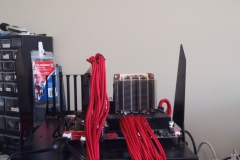 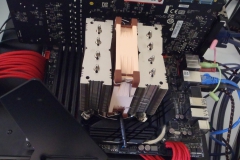 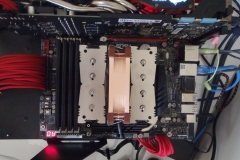 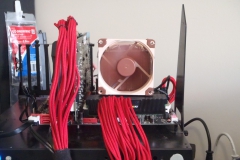 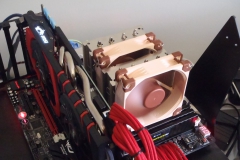 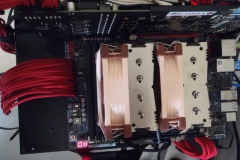 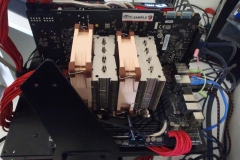 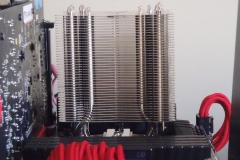 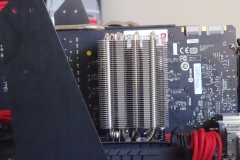 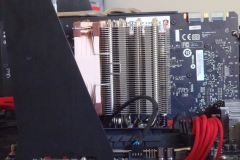 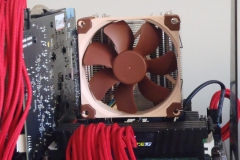 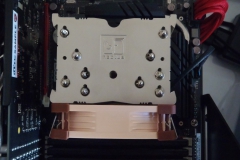 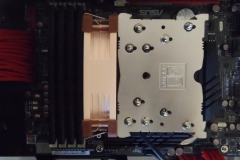 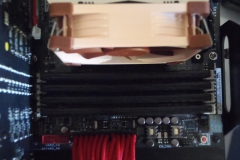 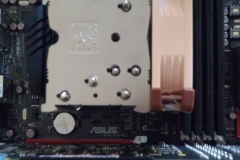 Let’s start with the PWM tests. PWM is where the motherboard uses the 4 wires to control the fans and adjusts the speed as per the software profile to maintain a temperature. The standard ASUS profile will increase the CPU fan speed as it gets warmer to try and maintain a temperature under 75 degrees. This means that the temperatures listed in the graph below don’t mean a great deal as all coolers will have different fan speeds to maintain the maximum temperatures listed. However the graph does show coolers that struggle to keep the CPU cool under extended load (high temperature results) and we do use this test to check how hard the CPU has to work at stock settings and when overclocked.

We saw the NF-A9 fans hitting around 1500rpm during the stock CPU tests under sustained load. The noise level on the open air test bench was barely audible and didn’t register above the ambient room noise on our decibel meter.

When overclocked, we saw the smaller 92mm coolers lagging behind the larger models as expected with the second fan shaving off another 4 degrees from each cooler. The PWM profile had to push the fans to maximum but they still contained the overclock and maintained the thermal target set by the software. The fans were noticeable on the open test bench at 2000RPM but not offensively loud. Our decibel meter registered the noise level between 22-24dB(A) at a distance of 30cm.

At 12v under stock CPU conditions (above), the small footprint 92mm U9S and D9L fill the middle ground once more, splitting the difference between the bigger tower coolers and the ‘free’ Intel Stock cooler. The stock CPU volts don’t really push the temperatures much and the above results are not as telling as the numbers we see when overclocking to 4.5GHz @ 1.29v (below).

The Intel stock heatsink was no match for our overclock in 12v or PWM and hit the 90’s in a few minutes. To be fair, the U9S and D9L were treading a fine line as well when fitted with single fans but they passed. With 2 fans fitted, the safety margin opened up and there was only a 2 degree gap between the D9L in dual fan mode and the 120mm NH-U12S cooler.

Acoustically, at 12v, the NF-A9 is noticeable but the penalty for two fans isn’t an issue – in fact the difference in terms of noise between one at full tilt and adding a second fan is barely noticeable. Well worth the 4 degrees of difference if you need the performance and are short on space.

We wouldn’t typically use this size cooler for extended periods of overclocking load like video rendering overnight etc but for gaming where the load is variable, both the U9S and D9L are great and certainly capable based on our synthetic testing and the real world gaming tests. Our practical build ran games all day at RESPAWN LAN in March without any issues at all.

The idle temperatures were all consistent and in line with other performance coolers. Measuring idle temps can be finicky due to minor fluctuation among the ‘idle’ processes so we don’t give it much weight. Typically we expect delta temperatures around 8 degrees mark as a standard and both coolers tested here were no different. What this shows is that we had a good ‘mount’ of the cooler to the CPU with the SecuFirm 2 brackets.

They didn’t do it easily when overclocked but both coolers managed our Haswell i5-4670K in the excessive synthetic benchmarks. It was a different story in extended gaming sessions with the variable CPU load proving a much easier scenario for the stocky little coolers.

At stock settings, a single fan was perfectly fine but for a little more safety margin when overclocking in cramped spaces we’d recommend buying an additional NF-A9 PWM fan and making sure you have active case ventilation. For general use, everything you need is in the box.

We’d hoped that these little guys would be capable of managing our overclock but hadn’t seen anything less than a 120mm cooler succeed in this regard during earlier tests. Kudos to the design team at Noctua – although the D9L has a slight and consistent edge over the U9S, both of them are highly versatile coolers that should be a build consideration for anyone using a small case.