When Cooler Master got together over a coffee (or tea) and decided to design the Ceres 500, I’m fairly certain the plan would have been to deliver a premium package at an entry level price. To that end they have delivered. The Ceres 500 is feature packed and sports the same perks as some of its more expensive rivals. 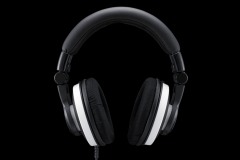 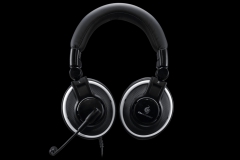 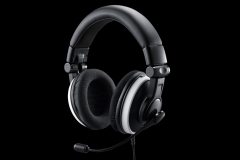 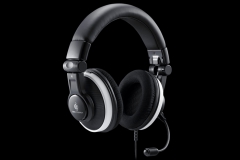 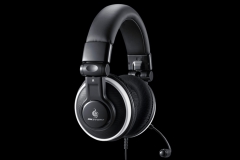 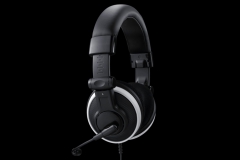 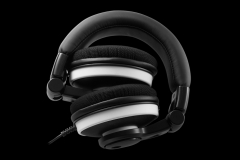 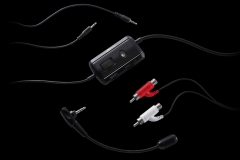 The Ceres 500 leverages a USB powered built in amplifier and 40mm drivers for some excellent sound for the avid gamer.
The Ceres 500 supports multiple formats via a two-way console/pc switch accessible on the switch-box – PS3, PS4 and Xbox 360 are supported. The headset comes with the various audio cables required for each format, and a handy explanatory diagram on how to connect it all up. We of course tested on the PC.

It’s a nice looking headset with a premium appearance.
The headset is extremely comfortable to wear thanks to the cloth earcups. Not once did I feel the headset slipping off, or weighing too heavily on my noggin.
After some 3 hour gaming sessions my ears didn’t feel abused which is a good sign. The headset stays planted and does not move around which means friction burn is not an issue.

Like the other products in the Ceres lineup, its built like a tank. The headband itself is 45mm wide and the pivots and hinges are made of thick durable plastic. It’s hard to imagine any grief coming to the headset from a structural point of view. You are more likely to damage the wiring before the actual headset itself, from perhaps getting jagged on your rotating office chair or the like. Which let’s face it is a potential risk for all wired headsets.
The microphone uses a flexible boom and is sturdy. Unfortunately you can’t swap sides for the microphone on the Ceres 500, this may be an issue for some.
The control box is nothing special but it does the job. It clips to your shirt or similar piece of clothing and allows you to alter your volume or mute the headset. Mic. volume is only supported on console. The headset volume control is via a small dial style potentiometer – the kind you might find on a radio. This is functional but I would prefer a graduated slider with some weight to it. As it stands the volume control is very light, and as it protrudes out of the side of the control box, you might easily knock the volume and give your ears a bit of a shellacking.

The headset was tested under gaming conditions. Games tested were Pillars of Eternity and Battlefield Hardline. Pillars of Eternity has been widely acclaimed for its brilliant orchestral music and the Ceres 500 was able to reproduce this sound faithfully in my ears.Battlefield Hardline sound was clear, crisp and explosions suitable bassy.
In Windows Media Player with a zeroed out Equalizer I found the sound erring on the bassy side with low mids and low treble presenting a slightly muddy aural experience. To fix this I introduced a moderate level of correction in the mid and treble frequencies, erring on more treble, whilst backing the bass down slightly. The result was beautifully clear audio not expected out of a budget headset.

It goes to show you that cheap doesn’t always mean bad, this product delivers extreme value for money and at approximately $70 online will complement any gamers arsenal.