ADATA products aren’t the easiest to find in the Australian market but they are there. We had the opportunity to include a couple of rippers in our recent Mini ITX build for the RESPAWN LAN line-up and they didn’t let us down. Check out the results where we test the ADATA XPG SX900 256GB SSD.

The XPG DDR3 and XPG SX900 SSD were the first ADATA products that I’ve actually had my hands on although I know a few people that were way ahead of me and have been using ADATA components for a while. Availability seems to be ADATA’s biggest enemy in the Australian market and after using their products for a couple of months now I’d say that the XPG DDR3 and SX900 SSD are under appreciated.

The 2.5″ form factor with 7mm thickness is pretty standard for an SSD and makes the XPG SX900 ideal for most notebooks and desktops. ADATA has included a 3.5″mounting bracket for maximum compatibility in PC builds. Although most modern day cases come with 2.5″ drive mounts, there are a lot of people upgrading older PCs with an SSD to squeeze a bit more life out of an old rig so this is a plus. 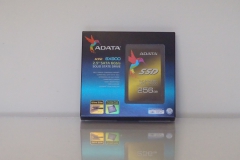 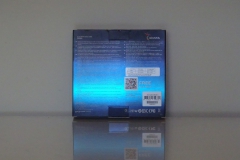 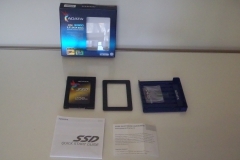 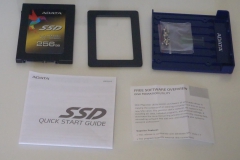 ADATA has implemented the SandForce 2281 controller with optimised firmware to gain a little extra capacity over other SSDs with the same controller. As we understand it, other SandForce drives reserve some of the total capacity for levelling, endurance, maintenance purposes which results in a smaller overall amount of useable storage space. ADATA have somehow managed to make this capacity useable in the XPG SX900. In the long term, I’m not sure how this will play out by way of longevity/durability but without a time machine, we’ll give ADATA the benefit of the doubt for now.

We’ll go through the specifications first, then validate our test unit against them to see how the SSD performs as a system drive.

We ran the review unit through its paces with Anvil Storage Utilities, ATTO, AS SSD, and Crystal Disk Mark to get some metrics for comparison against the specifications. 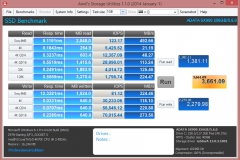 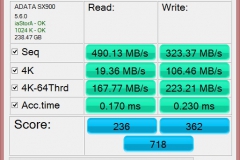 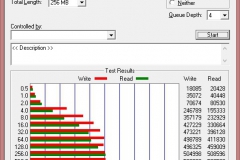 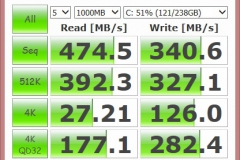 I was surprised to see the Random 4K write speed as high as it was but it was consistent in multiple test runs and different benchmarks.

The ATTO tests fell a little short of the maximum listed specification but keep in mind that we test our storage devices as a Windows 8.1 installation, not on an empty drive.

The Max 4K IOPS read result of up to 70K fell short of the specification (up to 91K) in our testing.

Overall, the ADATA XPG SX900 works as per the manufacturer specification and we certainly didn’t have any complaints when testing it or using it in our mini ITX concept build.

The 256GB is a good size for either a system drive or some additional storage for a fast steam library. It is a standard size and can be installed in 2.5″ drive mounts or in a 3.5″ bay with the included bracket. ADATA also give you a code for Acronis ATI HD 2013 to assist with data migration from another system drive – we didn’t use this as we always do a fresh install for testing.

As expected, we didn’t have any issues working with the drive during the build, the SATA power and data connectors were well placed and solid. The mounting screw holes lined up with our chassis but in the end we used double sided table to mount the drive for purely aesthetic reasons.

The gallery below shows the drive installed in our test bench and later the practical build. 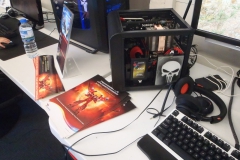 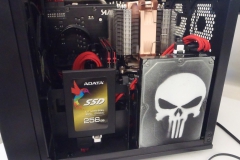 The ADATA XPG SX900 256GB model can be found online as low as AUD$179 which seems very reasonable compared to its competition. We wouldn’t call it cheap but it’s by no means expensive either.

We gave this drive a flogging in testing and then we wiped it and started from scratch in our mini ITX concept build. We tested the drive along the way and found the benchmark results to be consistent. We didn’t have any compatibility issues or problems with BIOS or Windows 8.1 recognising the drive, nor did we experience any performance issues when installing the Operating System or applications. Game load times and general system performance was really snappy with the ADATA XPG SX900 SSD and I’d happily use one of these (or perhaps more) in my personal system.