In both of our practical builds, there was one thing that bothered me in both – the 115x retention bracket. I’ll rant about it later but the radiator mounting was easy, the fans attached without any problems and the hoses never kinked or snagged despite their extra length.

When testing the Fractal Design Define R5 case, we also tested the Kelvin S24. As expected, we didn’t really have any issues fitting these two Fractal Design products together. The only fitting related issue was the hose lengths and the droop where the hoses came close to and eventually made contact with the back of the graphics card. I ended up securing them out of the way and although this system used a Micro ATX board with different PCIE placement to a full ATX board, it’s worth noting if you plan to use the top PCIE slot for something. 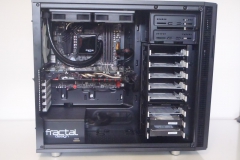 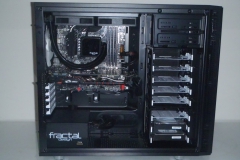 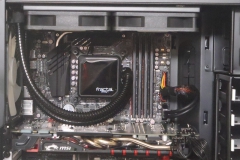 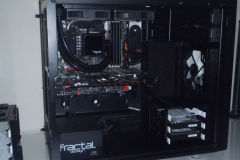 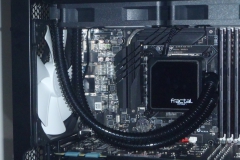 For our testing of the S36, we ran the hoses through the open roof panel of our Node 304 to the Maximus VI Gene test system and sat the 360mm radiator on the top of the case. It didn’t look pretty but it worked well. 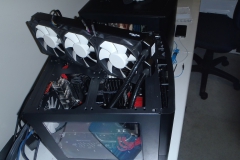 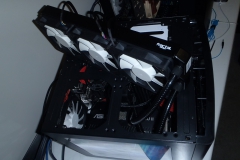 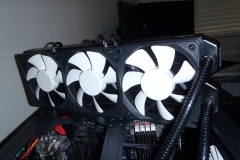 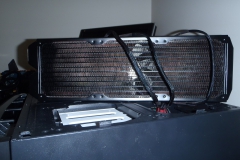 There is a minor issue with the water block being ‘piano’ finish in that it is an absolute fingerprint magnet so get a microfibre cloth handy to give it a polish if you use a Kelvin cooler – also leave the protective film on until you’re done.

The hoses are longer than other AIO coolers – consider zip ties or other anchoring to keep them from resting on components. They have a wire coil around the outside that looks conductive so letting it rest on the back of something like a graphics card isn’t a good idea.

Unless you are overclocking or using an expanded loop, you probably won’t need to run the pump at he full 12 volts. At 12volts it is audible over the fans so if you can manage the pump speed via motherboard software, drop it down to about 7 or 8 volts. If you can’t adjust the speed via software, consider grabbing a 7v fan speed reducer like the Noctua NA-SRC7 or similar and installing it for quieter operation.

Look around the toolbox for a hex head tip for your screwdriver. The hex bolts look good but it can be tricky using an Allen key when attaching a radiator.

Patience is a virtue. The intel 115x socket CPU bracket is fiddly and something I hope Fractal Design completely revisit in the next iteration of this product. Installing on a 2011 socket board was absolutely fine but trying to line up the mounting posts and the variable 115x holes was a total pain in the a–.