As stated earlier, Gigabyte has covered off everything that the average gamer would want in a LAN or dedicated gaming build within the Z97N-Gaming 5 package – the features will be covered in more detail below but there are no obvious corners that have been cut in order to reduce the cost.

The layout is really generally well thought out works for compact building. I installed the Gigabyte Z97N-Gaming 5 in a Thermaltake Core V1 and Fractal Design Node 304 case without any issues at all. When I first saw the battery it looked like an afterthought, just stuck on the back of the Audio jacks but it’s actually a good use of space and tucked well out of the way of anything else.

Gigabyte are making a big deal out of the 15μ gold plated CPU socket that is rated 5 times stronger than the standard 3μ socket design highlighting that it should improve reliability and longevity. We always like to see improved build quality and this feature will be judged over the life of the board, not a 2 month review period.

The front panel HD audio header is on the dedicated audio section of the motherboard near the audio jacks at the rear of the board near the PCIE slot. In some cases this will mean running the cable across the motherboard along the back of the graphics card – but in our Node 304 build, the MSI GTX760 HAWK had enough clearance around the PCIE insert to route the cable neatly in from the bottom edge, under the graphics card so if you use this board, keep that in mind.

Memory DIMMs and the PCI-e slot placement is pretty standard, running along the bottom and right edges of the board, set in a bit from the edge. It would have been nice to see another System Fan header on the board but that’s probably being a bit greedy considering how much Gigabyte has already managed to fit on a  17cmx17cm motherboard.

Although there is a PS/2 Gaming Device Port on the rear I/O, we didn’t have any P/S2 devices anywhere to check it out but the feature is there for the hardcore gamers who want it.

Socket placement is great. I managed to fit the 140mm wide Noctua NH-U14S on this board in the Node 304 case without blocking the PCIE slot. With a cooler like that, your overclock is safe and the noise profile is still very low. I was pleased to see that there was no sacrifice required in this area. There was room to spare between the back plate on the graphics card and the oversized Noctua NH-U14S which is convenient when using the PCIE slot lever if you need to remove the card.

Unlike the MSI Z97I Gaming board, the WIFI module was already installed and ready to go. The module works well and we saw performance that was on par if not better than other boards that we’ve tested in the same physical location.

For gaming, the WIFI was fine and my ping stayed within a few ms of the LAN experience. I tested this by playing Battlefield 4, DayZ and Titanfall online with nothing else using our internet connection. In a blind test, it was difficult to tell the difference between LAN and WIFI when gaming but pretty obvious in file transfers as expected.

The onboard gigabit LAN was solid, the Killer software seemed to prioritise correctly and performed as expected when it came to transfer speed (write) tests hitting 735Mbps writing/874Mbps reading to another PC’s SSD share. The 5GHZ WIFI gave us almost 100Mbps with 88Mbps writing and 82Mbps reading. To make this a realistic test, the WIFI tests were conducted through 2 interior stud walls so depending on your setup at home, your mileage may vary in this regard. The board boasts Intel WIDI capability but we didn’t have a receiver/display to test this with.

We have seen a number of boards with implementations of the ALC1150 audio chipset from Realtek and the results have been consistently good overall. The Gigabyte Z97N Gaming 5 is no exception with Gigabyte also including the Creative SoundBlaster X-Fi MB3 software package. The audio solution offers 115dB Signal to Noise Ratio, 7.1 channel playback plus 2 independent stereo channels via the front panel header.

It doesn’t end there – Gigabyte has also included gold plated audio jacks, high end Nichicon audio capacitors and Audio Noise Guard EMI isolation technology with the trendy red LED path lighting to make sure you don’t miss it. There is also a built in rear audio amplifier capable of driving 600Ω loads. There were absolutely no complaints from anyone who listened to the audio

Gigabytes software suite is easy to use and we received regular updates over our 2 month testing period which shows an ongoing commitment from Gigabyte to maintain the software. It’s also worth noting that we didn’t have any application errors or utility stability problems during regular use and heavy gaming.

App Centre is an overall consolidation of the Gigabyte system utility software mush like the ASUS AI Suite (For those who are familiar) where it provides a menu system and tray agent that you can access to open any of the included programs from one place. It also keep them updated and allows you to change the skin to 4 colours – essentially themed blue, green, and 2 shades of red. The screen shots for the review are from the brightest red. There are a couple of minor apps worth a mention too, USB Blocker that uses a password to block certain devices on USB like mass storage or communication devices and Fast Boot that will reboot your PC straight into BIOS without the need to constantly mash the ‘Del’ key. 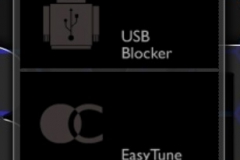 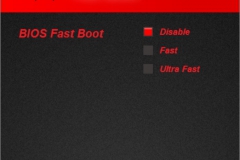 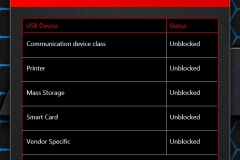 The EasyTune tweaking and monitoring software is very similar to the equivalent offerings of MSI and ASUS with the main exception being a lack of RAMDISK functionality. The software allows for Fan control profiles, basic and intermediate overclocking, temperature and voltage monitoring/logging and finally alerts. EasyTune should satisfy most enthusiasts let alone gamers. See the screen shots below to get an idea of what you can see and do with Gigabyte’s latest version of it’s front line widows based monitoring and tweaking engine. 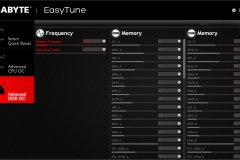 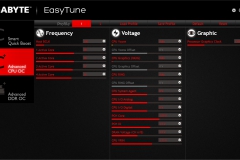 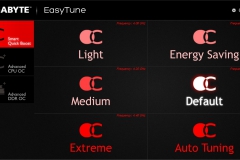 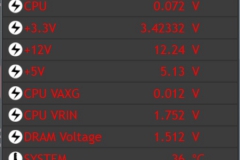 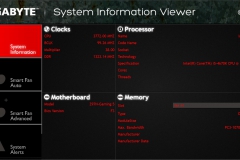 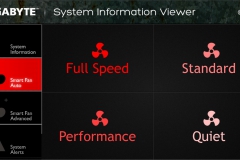 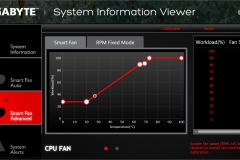 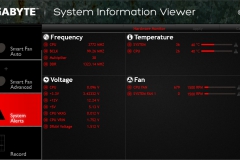 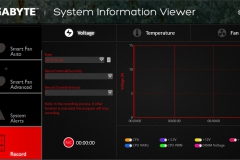 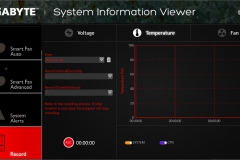 The Game Controller application is a good concept for mapping keys and macros so you don’t have to use a “gaming” keyboard with macro keys and it also takes over the management of your mouse sensitivity. You can even map a ‘Sniper’ button to adjust the mouse sensitivity when zooming in for that long range head-shot. I don’t tend to use the macros that are available with my keyboard and mouse software but for those that like their macros and perhaps use older peripherals this software could be really handy. 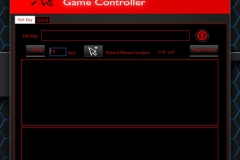 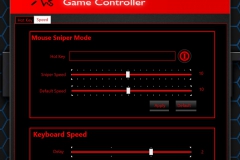 This software is going to be really handy for people with either no will power or who want to limit the use of their rig to certain hours. Smart Lock provides a way to disable internet access or even shut down the PC during certain designated time periods and is controlled by a password. The application gives the option of defining a week as Monday to Friday as per a business week or Sunday – Thursday to cover ‘school nights’. The slider allows for duration and the non use time blocks out time ranges for weekdays and weekends. I liked the user interface for this and can see how if could be really handy to enforce rest in modern day times. Check out the screen shots below to see the configuration options of a working week and ‘school nights’. 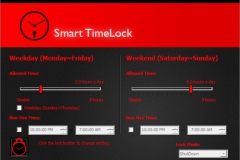 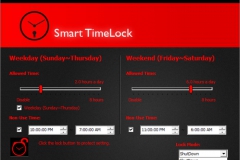 As with every implementation of the Realtek ALC1150 chip, there has been a serious software component to balance out the hardware design. Gigabyte has gone with Sound Blaster X-Fi3 and the feature set is extensive. You still get the basic Realtek tray agent with auto sensing jacks etc like other ALC1150 motherboards – it’s in the driver but there were a few features in X-Fi3 that caught our attention during testing. In the series of screen shots below, we’ve captured each configuration panel in the Sound Blaster Application.

The options are pretty comprehensive for bundled software and there are some screenshots below to see it in action. 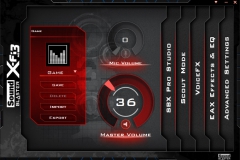 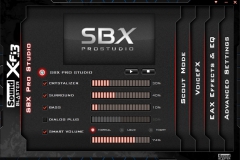 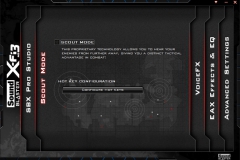 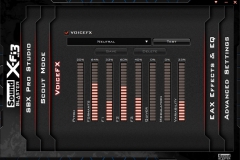 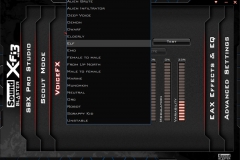 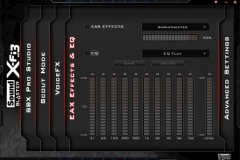 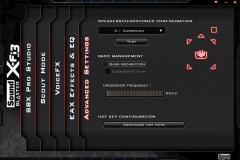 Gigabyte has provided a dual interface with their UEFI DualBIOS where you can use the high resolution ST (Smart Tweak mode) interface or the more traditional Gigabyte interface. Both allow extensive tweaking and tuning of the system and both are very intuitive. See the youtube videos embedded below – note that this is a straight capture via an Avermedia Live Gamer Portable and there is no audio.

I don’t really have a stand out preference between the two but think I’d consider the newer Smart Tweak mode a faster way to setup boot priority, date and time and some quick known overclocks for the first time. It seems to flow better as you move through it. The traditional interface is great if you need to change something specific and have a few years of experience working with other BIOS implementations.