The MSI GTX760 HAWK is one of, if not the, most expensive 2GB GTX760 cards on the market so consumers are well within their rights to expect it to be both feature rich and faster than the rest.

The Twin Frozr Cooler is a custom cooling solution that MSI have been using for a while but the version on the HAWK is the Twin Frozr IV.

MSI’s Twin Frozr IV is a dual fan cooler with 5 heatpipes including one 8mm ‘SuperPipe’ that you can see prominently on the top of the card. The heatsink also cools memory and the VRM.

The cooler is a dual slot design and has 2 100mm fans that spin in reverse for 30 seconds on start up to dislodge any dust and then change direction to blow air over the fins and heatpipes. The cooler is extremely quiet and in normal use, we couldn’t identify it over ambient noise on the open air test bench. The thermal performance was also impressive so it ticks the boxes for being both quiet and effective. 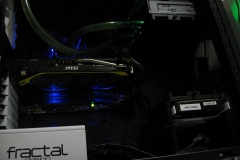 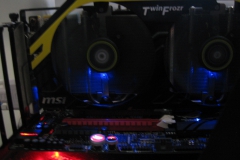 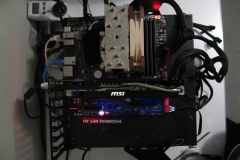 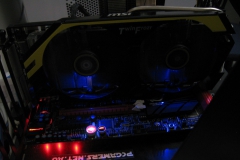 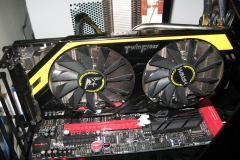 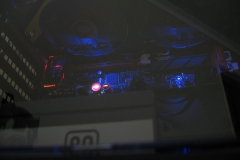 There are a pair of blue LEDs embedded in the 100mm fans on the cooler that cast a soft blue hue over the motherboard. They don’t light up immediately on start up when the fans are in reverse for a brief period but under normal operation, these add a little ambient light to the inside of your rig. I’ve included a few poorly lit photos in the gallery above to try to show the blue glow and how far it spreads.

MSI included a switch on the top of the card to select between the two BIOS chips on the HAWK. The standard BIOS has the factory overclock and is what you would expect to see on a gaming grade GTX760 and the LN2 option allows for a higher level of overclocking by disabling Over Current Protection (OCP) and Active Phase Shifting (APS). When you fire up MSI Afterburner, you can see the difference in limitations of how far you can tweak the options depending on which BIOS is selected.

The HAWK has twin 8-Pin power connectors instead of the twin 6-Pin connectors on a standard GTX760 which means that it can draw more power to feed the card. The connectors have the release clip in the standard orientation facing the cooler – the non standard cooler has a big heat pipe running across the release clip area as well. This makes unplugging the PCIE power cables a little awkward – it isn’t a major issue but if MSI were to reverse the orientation of the power plugs I’d go so far as to say that this card would be a ‘Perfect’ GTX760.

As seen in MSI motherboards, they pride themselves on being with their customers for the long haul and their advertising material makes a big deal about the Military Class components – and so they should. System builders care about the longevity of their components. As gamers and enthusiasts, we accept that a faster chip will be released, that new software will require more memory or faster clock speeds and that one day, our shiny new card will struggle to keep up with the latest titles. What we don’t accept is a card that doesn’t go the distance due to cheap or inferior components failing under standard conditions.

MSI boasts that the HAWK meets MIL-STD-810G standard (check out here if you are interested to know more), as such they have incorporated:

From what I can tell, the MSI design team wanted to make sure that owners grow out of the card through technical obsolescence rather than wearing it out at a component level.

There are 3 voltage check points and handy leads for your multimeter to plug into. You can monitor the voltage for the GPU, the memory and the PLL from the board itself rather than at a software level 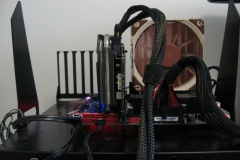 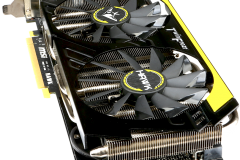 Backplates are something that I really like to see on graphics cards. We spend a fair amount on our GPU and it typically sits there under the CPU cooler with it’s back totally exposed. When we handle the card, it’s hard not to touch the back as you install or remove it. Aftermarket backplates are available for selected graphics cards and cost around $30, with the HAWK, it’s part of the package. After benchmarking the card, overclocking it and giving it an intense work out, the metal backplate did get pretty toasty.

I’ve been using MSI Afterburner on non-MSI cards for years and it’s been my go-to application for graphics card tweaking. It’s included in the software bundle but you can download it from their website and most enthusiasts probably already have it installed.

As seen in the MSI Z87 Gaming Motherboard review, this nifty application keeps everything up to date and lets you know when new versions of drivers or BIOS updates are available.

The packaging is sturdy and the card comes well protected in an anti-static bag and custom cut out foam. There is a box of accessories including: