Most PC Gamers have a headset and I’ll go out on a limb and say that the majority of PC Gamers also have a ‘corded’ mouse. Tt eSPORTS sent us their Hyperion Headphone Cradle and Galeru Gaming Mouse Bungee to highlight how lower cost items can really compliment the more expensive peripherals of a gamer’s workstation. By lower cost, we are talking under $20 RRP each.

We saw the Galeru in person for the first time at the EB Games Expo in Sydney back in October but it’s been around for a little while and there are a few other products similar to it on the market. When it came to the Hyperion, we’d seen them in some online stores but never up close. These products are good examples of simple concepts that can make a big difference to your gaming environment. I’ve been using both of these review samples at my gaming desk for about a month and agree that they have added to my gaming experience. 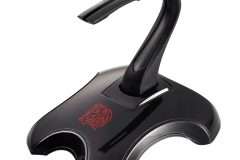 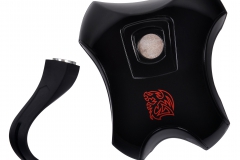 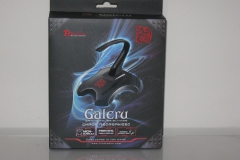 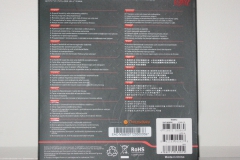 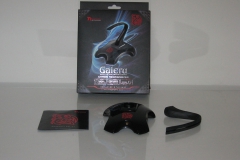 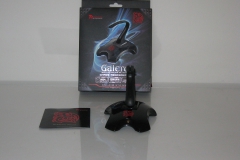 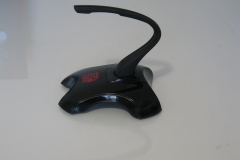 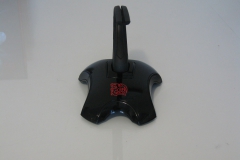 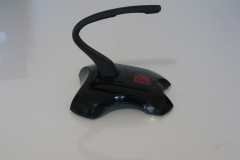 It’s a weird scorpion-like object with a funny name that basically holds the mouse cable in a channel on the curved rubber bungee at the top. By controlling the cable in this way, you have just enough slack available for moving your mouse around but not so much that you get tangles. The height of the bungee is only about 11cm tall so it’s tall enough to keep the cable up off the desk and clear of most clutter but low enough not to get in the way of your screen or be distracting. The base is ‘weighty’ and if you were to have a moment of mouse rage, the bungee is magnetic and detaches from the base if you yank it hard enough. The base is also shaped underneath to allow cables to pass under it which is great for routing keyboard cables across the desktop. We are talking about a very simple peripheral here, with only 2 parts so there really isn’t much to review in terms of the product itself.

Although there are some nice wireless gaming mice on the market, I’m not ready to make the jump just yet. While I’m using a wired mouse for gaming, the cable is going to snag on something from time to time or get tangled. I wasn’t totally convinced about the Galeru when I took it out of its box but within a few days of using it I was sold. The only part of the mouse cable that matters is the bit between the Galeru and the mouse, as long as the other end is plugged into the PC, whatever happens the rest of the cable beyond the bungee has little impact on me and the Galeru keeps it that way. For the RRP of $19, it seems appropriately priced and worth the spend.

Gamers are typically innovative, resourceful and like to show off their shiny new gear (including headphones). Most gaming workstations have a certain level of visible improvisation – in my case, it was the front right speaker from my old home theatre system that doubled as a headphones stand.. sort of. Previously, I’d tried just sitting them on my desk and then sort of clamping them around the front edge of the desk but the cable would get in the way or I’d still manage to knock them onto the floor etc. 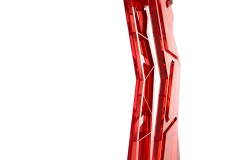 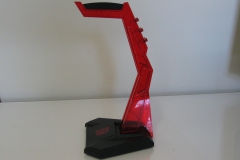 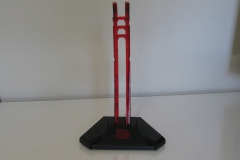 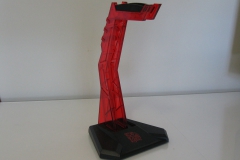 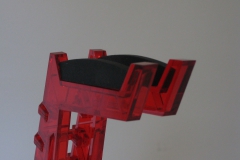 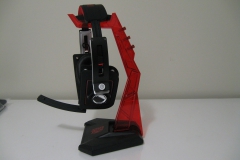 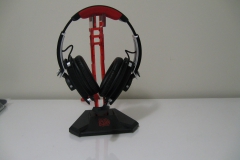 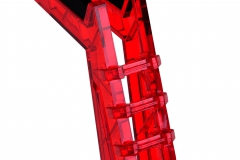 The Hyperion is a plastic and rubber stand designed to do one thing – hold your headset. It’s light but has a wide enough footprint to be stable. The rubber pads on the top keep the headphones centred and stop them from sliding around or off. The concept of using something basic to both keep my headset out from under my chair and also make it easily accessible is a no-brainer.  After using this day to day, it’s one of the cheapest ‘value adds’ that I can think of for a gaming workstation. The one thing I’m not sold on is the colours but they are consistent with the rest of the range and a matter of personal preference. As it happens, the red and black matches the following kit in the lab:

From a practical point of view, the Hyperion is great and I will probably buy a few for the workstations in our test area to try and keep things neat. Going ‘vertical’ to store headphones upright is a good use of space and our precious ‘cans’ are far less likely to get damaged this way. For the asking price, you can’t really go wrong – my only quibble is that they don’t come in clear, blue or green in addition to the red – although the red is growing on me.

Given the price of these items (AU$19), they fit into the ‘stocking filler’ category at Christmas time and would each typically cost less than 2% of a $1500 gaming PC build. Why is 2% important? Most stores have around 2% surcharge for paying by credit card. If you can pay by direct debit, EFTPOS or PayPal, then you might not feel so bad about treating yourself to a little bonus with the money you saved on the surcharge.

All up, these would be good gifts for the gamer who has just about everything – it’s a hard choice but if I could only have one, it would be the Hyperion and only just. The reality is that I’ll be buying both.