Recently, Noctua announced and then released their new U-series single coolers – the U12S and U14S. Noctua has addressed the trade-off where consumers need a performance air cooler but also want to use performance RAM with high profile heat spreaders. Thanks to the new slim look of the U12S, system builders won’t suffer the same limtations as before with regard to the overhang of the cooler and fan fouling the RAM slots. I tested the NH-U12S in our Node 304 build and noted that there was indeed clearance for tall RAM modules and the Noctua claim of 100% RAM compatibility is good news for enthusiasts.

Noctua provided both the NH-U12S and NH-U14S for testing with an additional fan for each so that I could test in single or dual fan configuration. This review will cover off the NH-U12S but rest assured, the NH-U14S review isn’t too far away.

When I saw that the tower was thinner, I was curious if there would be much of a performance hit or if the 5 heat pipes and NF-F12 focus flow fan would be more than enough to make up for the slimmer heat sink. With Noctua’s track record of quality CPU coolers, I wasn’t surprised to find that this is another solid performer from the beige and brown team. 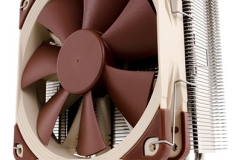 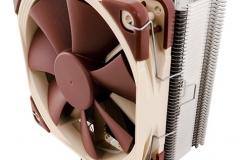 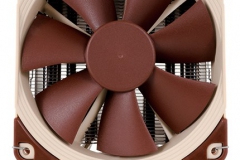 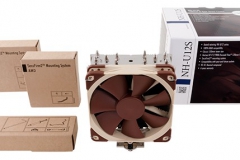 Images courtesy of Noctua.
Noctua packaging seems to always rate a mention and this time I noticed that it has changed just a little. The contents of the box are still very well protected and the accessories, mounting kits and tower cooler itself are packaged even better than before – in separate cardboard boxes with the contents laser printer on the outside.

Having just tested the Fractal Design Node 304 with the NH-L12, I thought it would be good to install a tower cooler and see how it fit and how it performed with the i5-3570K.